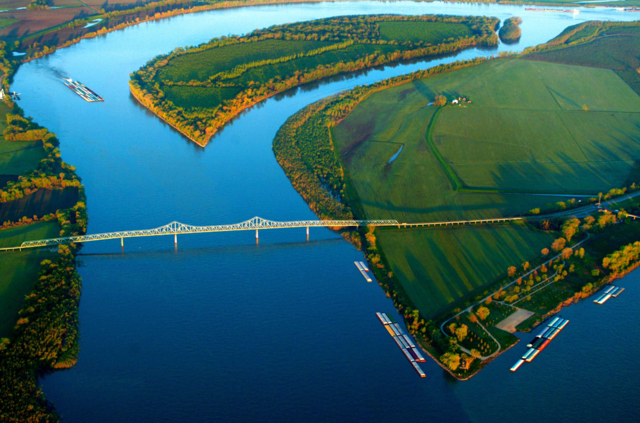 Editor’s note: This is the eighth and final article in a series describing the major river basins of Kentucky.

The Mississippi River at the confluence of the Ohio River in Cairo, Illinois. (Photo by USGS)

The Mississippi Basin drains all or part of 32 US states between the Rockies and Appalachia, or 1,139,490 square miles. It borders or crosses the states of Minnesota, Wisconsin, Iowa, Illinois, Kentucky, Missouri, Tennessee, Arkansas, Mississippi, and Louisiana.

The Mississippi River forms the western boundary of Kentucky for 71 miles in four counties—Ballard, Carlisle, Hickman, and Fulton—from the confluence of the Ohio and Mississippi at Cairo, Illinois south to New Madrid, Missouri.

Art Lander Jr. is outdoor editor for the Northern Kentucky Tribune. He is a native Kentuckian, a graduate of Western Kentucky University, and a hunter, fisherman, gardener, and nature enthusiast. He has worked as a newspaper columnist, magazine reporter, and author and is a former editor of Kentucky Afield Magazine, editor of the annual Kentucky Hunting & Trapping Guide and Kentucky Spring Hunting Guide, and co-editor of the Kentucky Newspaper Column. Afield Outdoors.

Native Americans were present along the Mississippi River in Kentucky for thousands of years, first as nomadic hunters and gatherers and later practicing agriculture in villages.

Wickliffe Mounds State Historic Site, near the confluence of the Ohio and Mississippi Rivers, was the site of a Native American village occupied between 1100 and 1350 AD

Open to the public since 1932, the museum exhibits excavated artifacts such as pottery and stone tools from the Mississippian and features artwork depicting their way of life and the archaeological history of Native American tribes in Kentucky.

There are three major tributaries of the Mississippi River in Kentucky – Mayfield Creek, Obion Creek, and Bayou de Chien.

Mayfield Creek originates in Calloway County, flows north through Graves County just east of Mayfield, then turns west through McCracken County. It forms the boundary between Ballard and Carlisle counties and joins the Mississippi River just south of Wickliffe.

Obion Creek originates in southern Graves County, flows northwest into Carlisle County, then turns sharply southwest through Hickman County to its confluence with the Mississippi River at north of Hickman, in Fulton County.

For more information on towed boat launches on the Mississippi River in Kentucky, visit the KDFWR Waterways website.

The confluence of the Ohio and Mississippi in western Kentucky is the culmination of the Mississippi Flyway, a bird flyway that generally follows the Mississippi, Missouri, and Lower Ohio rivers from their breeding grounds to the Canada and northern United States to their wintering grounds along the Gulf of Mexico and in Central and South America.

About 40% of waterfowl and migratory shorebirds in North America use this route. The other main flyways are the Atlantic, Central and Pacific flyways.

More than 325 species of birds make the round trip each year along the Mississippi Flyway.

The abundant wetlands along the Mississippi River in Kentucky provide excellent opportunities for wildlife viewing, fishing, waterfowl hunting and trapping for beaver, river otter and other furbearers .

The lake was formed by the New Madrid earthquake on December 16, 1811 and two aftershocks on January 23 and February 7, 1812. The land beneath the old Mississippi River, Bayou de Chien and Reelfoot River canals sank, filling with water flowing down the Mississippi River.

Image of Reelfoot Lake from US Fish and Wildlife Service; Click to enlarge the image)

Reelfoot National Wildlife Refuge was established in 1941 in Tennessee. Additional land purchases expanded the refuge into Kentucky and its current area of ​​10,428.

The refuge and surrounding lake have been preserved as a sanctuary for migratory birds, providing important habitat for over 283 bird species, including the endangered lesser tern.

The sanctuary is an important wintering, migration and nesting area for waterfowl. There is also a large wintering population of bald eagles.

The sanctuary is also home to a variety of other wildlife, including white-tailed deer, wild turkeys, furbearers, reptiles, and amphibians.

The lake also offers excellent fishing for bluegill, crappie, and other fish.

Wildlife recreation opportunities include a quota deer hunt, a 3.5 mile road trip, hikes through lowland hardwood forests with multiple lookout towers, and paddling in small boats (kayaks and canoes) through the calm waters of Reelfoot Lake.

The Mississippi River Basin in Kentucky offers visitors the opportunity to explore wildlife habitats not found in the eastern two-thirds of the state and learn about an advanced Native American culture that thrived in the region, prior to European exploration.

In many ways, the area below the confluence of the Ohio and Mississippi rivers is unique in the state and well worth the long drive. It is one of the must-visit tourist destinations in the state.