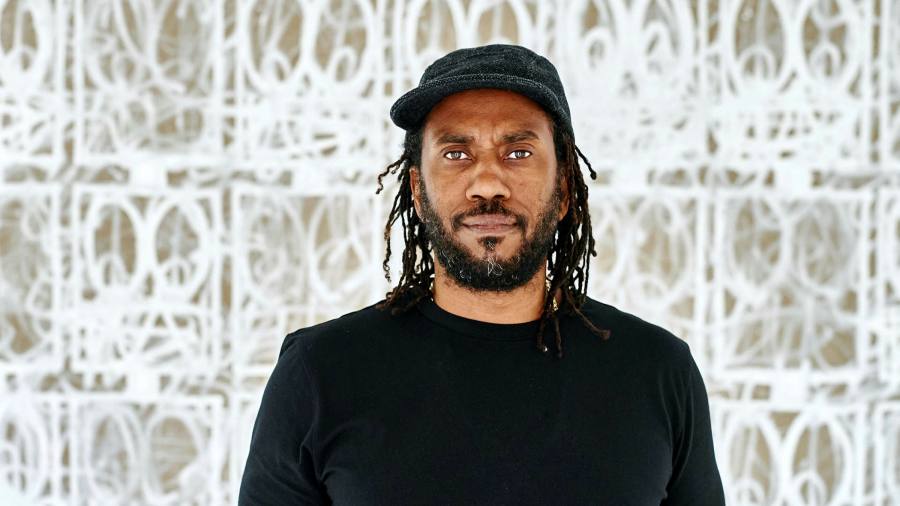 “I’m just going to go ask them to turn that music off,” says artist Rashid Johnson, as we stroll through his new exhibit. “I find it a bit distracting.” It wanders away through the vast spaces of Hauser & Wirth’s galleries in Menorca, which opened last year in the converted outbuildings of a historic naval hospital on the small island of Illa del Rei in the port of Mahon.

But he comes right back, smiling. “There were only the children,” he says – that is, a large group of schoolchildren eager to take part in a drawing session in the nearby education space. And anyway, they were playing his song: “Sodade”, a haunting ballad of nostalgia and nostalgia by the Cape Verdean Cesária Évora, from which the American artist took the title of his show.

“Some things travel outside of their origin stories,” Johnson says when I ask him what the word and song mean to him. “It means a touch of sadness, a touch of melancholy – but maybe even the desire for something you’ve never even had.” It seems appropriate for this island, a place once remote from travels, conquests, migrations.

“Although this exhibition is not meant to be sad, exactly, I have come to feel that a melancholic space is almost the space between joy and tragedy, and I feel like when I was doing this work, that’s where I was.”

When we talk about Keats’ “Ode to Melancholy”, Johnson immediately mentions the poets who were important to him and how he was brought up with poetry – his mother is a poet, as is his sister: “For critical engagement and for discussion of the human condition, poetry is truly the ultimate bridge to explanation.

Johnson, 45, uses this language naturally and lightly. Very tall, relaxed, with a warm voice, he moves easily from informal to an almost academic language. We turn to the large canvases around the galleries: in blues and whites, sweeping lines in seemingly repeating patterns of crescent curves.

“I consider them as boats, as vehicles, as representations of the autonomy, of the freedom of the individual. Each of them feels as if they should have their own occupation. Give agency to independent thought.

They are worked in multiple layers of oil paint, built up and then removed to reveal undercoats: a deceptively simple surface revealing rich depths. They sometimes feel stormy, sometimes more peaceful, an uplifting feeling with only a touch of foreboding. In coloring as well as theme, they evoke water. When I suggest that a shadowy island in the Mediterranean seems a long way from his native Illinois and his adopted home in New York, Johnson is quick to draw parallels.

“I have spent more time in recent years near water [he now has a home in Long Island]and it’s interesting that this work is happening here” — he waves a hand at the sea just beyond the gallery windows — “but also I grew up so close to Lake Michigan, which is this huge expanse, like a sea: with my friends we spent days and nights there – I smoked my first joint there, I had my first kiss there – it was really the backdrop of my childhood.

Watery Venice also comes up in conversation: Johnson has just been there with his wife, Iranian-American artist Sheree Hovsepian, who was exhibiting in the Biennale’s main exhibition. They have a 10 year old son. His own family, he says, always supported him: his father was an artist, even though he had other jobs. “They were comfortable having an artist in the family.”

These new works are much quieter than Johnson’s work that I know – the artist is famous for his sculptural use of an almost delirious array of materials, from ceramic tiles and mosaics to shea butter and processes of arcane painting. Yet here he is putting oil paint on canvas and, in another room of the living room, making bronze casts. “Yes, he laughs, I’m more used to materials that don’t have that long history: it’s like joining another club.”

But he wants to tell me that although he studied photography and used it a lot in his practice, he was above all a painter. He grew up, however, in a 1990s art community where “all the smart kids were studying new media – it was performance, installation, film and video, the rest. It was cheap to install something or perform something. A lot of artists of color at that time were interested in these new media, partly because they didn’t have this whole canonical history so framed by Western constructs – it felt like we could affect the discourse here.

“It was being part of the pioneer groups, exploring new languages ​​and creating new modalities. So I kind of came to it that way. And I continued to think of my work in the non-support-specific compliance space.

In another part of the gallery stand four large dark bronze vessels, like life-size canoes, squat and roughly hewn, cast from clay originals. They are in fact functional hearths, with charred logs in their slatted bedsteads – “they function as much as pyres as they do sculptures,” he says, referring to funeral rituals. I wonder about the “found” objects embedded in the surfaces, an astonishing detail of the tanning work: a book, the key to his old studio, a wristwatch.

“Well, I call them ‘wanted’ objects — they’re intentionally brought to the works. It’s a handful of a Community Band radio – it was quite fascinating, almost an early form of the Internet. It’s a tribute to his father, who worked in CB radio, as well as the network of truckers who used the system — another form of transportation featured on this show about travel, travel, travel.

“Carrying your voice, reaching out into space. And what was so interesting to me about CB radio was that you developed a ‘nickname’, you could create an identity, some of your characteristics were erased – like race and other characteristics – so you had this different sense of autonomy.

There are oyster shells embedded in these surfaces, an homage, he says, to Zora Neale Hurston’s book How does it feel to be colored and his great phrase: “I am not tragically colored. . . I’m too busy sharpening my oyster knife. “I loved her sense of self and how well she understood herself,” he says.

I don’t want to be called anything other than an artist, or by my name

These are among his few obvious allusions to his African-American heritage. Johnson is often described as a “post-black” artist – a phrase coined by Studio Museum Harlem director Thelma Golden, who included Johnson in a major exhibition, freestyle, in 2001. He was only 24 years old; he describes it as “a huge turning point”. But despite the accolades and opportunities that followed, Johnson coldly turned his back on instant market success and returned to graduate school in Chicago. He credits the caliber of the other performers in the show for his realization that “I had even more than I wanted to know, to work in a more experienced, complex and thorough way. I was not ready.

As for the post-black phrase itself – which has been defined as “the art of black experience that tries to dispel the idea that race matters” – he says: “It has been hijacked and it is complicated – people positioned me as such – sometimes I embraced certain aspects of it, other times I had problems with it. I understand the way it was intended and I don’t dismiss it – but rarely will you find an artist described as minimalist describing themselves as such. I don’t want to be called anything other than an artist, or by my name.

In a third section of the show are Johnson’s series of Hematoma paintings, which he started in 2021. He says the title refers to “a space between blunt trauma, as we have experienced it, and healing and where we are going.” Powerful grids of dark lines, solid and strong, are filled with repetitive, almost anguished patterns, often in blood red: the eyes of an anxious man, part of an organism beset by turmoil and stress. No peace here – until their tones subside, in another series, in white on white, a more ghostly but more abstract version, Abandonment paintings.

Despite their emotional punch, the Hematoma the paintings are “some of the most satisfying things I’ve ever done in my life”, he says. “They were cathartic, not straightforward – but every time I did them I felt alive and discharged.”

The entire exhibition of 14 paintings and the four sculptures was made in the past 18 months, and none have been shown before. Johnson was already familiar with the setting, as Iwan and Manuela Wirth had consulted with him and some of their other top artists when planning the project. These new works, he says, have given him the opportunity to “lean into” feelings and ideas he was already immersed in, but he relishes their connection to the place. He describes it as a “graduation on a theme”. A work from the same series will be presented at Art Basel next week.

As we say goodbye, Johnson leaves for Madrid, on his way back to New York. He plans to visit the Reina Sofia Museum, to see Picasso’s “Guernica”. “It’s fascinating to see how pain like this lives and endures – a great work of art can pivot where it lives, rather than being tied to where it was born.” I think I know what he’s talking about.