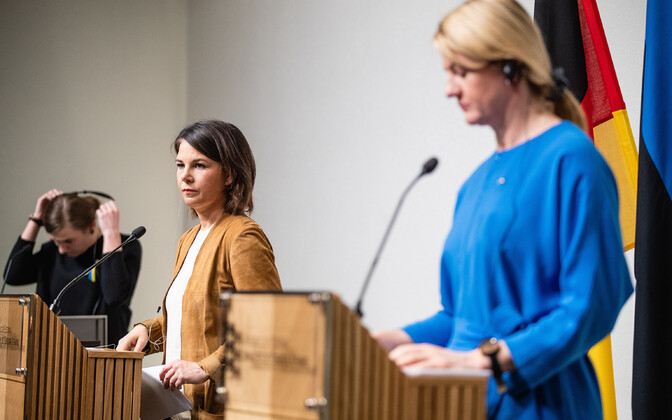 Speaking at a joint press conference with Baerbock, Foreign Minister Eva-Maria Liimets (Centre) stressed that Russia cannot win its cruel and inhumane war in Ukraine, according to a press release from the ministry.

Liimets thanked Germany for its important contributions to the security of the Baltic Sea region, in particular through NATO’s Baltic Air Policing mission.

“We need to adapt to the new reality and strengthen NATO’s defense and deterrence capabilities on the eastern flank of the alliance,” she said, noting that Estonia has therefore decided to increase its defense spending over the next four years to 2.5% of GDP.

The Estonian Minister also highlighted several areas in which Germany and Estonia are cooperating, including the NATO Cooperative Cyber ​​Defense Center of Excellence (CCDCOE) based in Tallinn and the Baltic Defense College, but also helping the Ukraine with field hospitals.

She recognized Germany as a crucial partner for Estonia in terms of energy independence from the Baltic Sea grid and the development of hydrogen technologies and connections, and said that Estonia could follow the example of Germany as the second largest producer of offshore wind energy in the world.

However, Liimets also stressed the need for Europe to achieve energy independence from Russia.

“We need to adopt the European Union’s sixth sanctions package as soon as possible, and Estonia strongly supports the inclusion of oil and gas imports in this package,” she said. “We cannot allow a situation where we basically continue to support the Russian war machine by importing their energy carriers.”

Baerbock confirmed that the EU is united in sanctions against Russia and will not back down until Russian President Vladimir Putin ceases his actions in Ukraine.

“We will increase economic pressure on Russia,” said the German foreign minister, who did not, however, specify when Germany would give up Russian energy carriers, including gas, oil and coal.

“Germany cannot give them everything”

According to Baerbock, Germany will also continue to supply Ukraine with arms and ammunition, because Ukraine also defends the freedom of other European countries. “After the outbreak of the Russian war in Ukraine, Germany began to view security in a new light,” she said.

She also confirmed that when it comes to security, Germany will remain a strong supporter of Estonia.

“We are on your side, because the Russian threat is real,” Baerbock said. “We cannot turn a blind eye to this, and Germany will contribute more to [NATO] security.” She also pointed out that article 5 of the covenant applies without if, and or but included.

Asked by the ERR whether Germany, which until now has been hesitant to supply Ukraine with arms, will supply it with modern Leopard battle tanks, the minister replied that Germany intends to supply to Ukraine supplies that will be received in trade from other Eastern partners. She also added that Germany was actually short of weapons and other resources such as helicopters.

“We have been supplying arms to Ukraine since day one of the war,” Baerbock said. “Looking at our own arms stocks, Germany cannot give them everything immediately. Our defense industry has drawn up a list to decide together with Ukraine what Ukraine needs.”

Germany also supports its NATO partners, allowing them to supply Ukraine with weapons that they themselves cannot.

“It is currently not possible for Germany to deliver weapons like the Leopard tanks to Ukraine, as they require training and knowledge regarding their maintenance,” she said.

The German minister said the situation in the besieged city of Mariupol is unbearable, but only Putin can create opportunities for civilian evacuation from the city.

“The issue of the humanitarian corridor has long been a major problem in Ukraine,” she acknowledged. “There have been constant efforts to make the Russian leadership understand their necessity. As experience has shown, Russian promises cannot be relied upon to establish them. We have tried to solve this problem with the International Committee of the Red Cross, but it’s in Putin’s hands alone, he has to stop bombing the spillways.

I had a good dialogue today with my colleague @ABaerbock in Tallinn where we discussed the security situation #Europehow to better support and help #Ukraine to stand up against Russia and strengthen the #EasternFlank. #StandWithUkraine️ pic.twitter.com/bw3GzjPn7U

Baerbock mentioned the long-standing ties between Estonia and Germany, dating back to the local Baltic-German population and the heyday of the Hanseatic League. “We want to deepen those ties, and there’s a great prospect here in the area of ​​green energy,” she said.

She also recognized the great interest in the German language and culture present in Estonia.

“Our partner schools in Estonia are bridge builders,” said the German minister. “The networks we have set up are against Nazism and division, because Russian propaganda also wants to divide people from each other here in the Baltic countries. We will fight against this together, in the media field as well. Since then 2016, we work together to loosen the grip of Russian propaganda – we teach young people about freedom of expression so that they recognize Putin’s lies.”

Click on here to watch the full joint Liimets and Baerbock press conference.

Kallas: Germany has a leading role to play

The war will not end overnight because Russia’s goal of destroying Ukraine remains the same, Kallas stressed according to a government press release. “Stopping the aggressor requires a huge effort from Ukraine first and foremost, but also from the free world,” she said.

“It is clear that Ukraine must win this war, and Germany has a leading role to play in stopping Putin’s war machine,” the Estonian Prime Minister stressed.

“As the Ukrainians have said, the best humanitarian aid is military aid,” Kallas said, stressing the need to send more aid to Ukraine quickly. “Estonia is one of the countries that has helped Ukraine the most, but until the war in Ukraine is over and Russian troops are withdrawn, none of us did enough.”

During their meeting, Kallas and Baerbock discussed the upcoming EU sanctions package, as well as the importance of granting Ukraine candidate status within the EU.

They also discussed defense cooperation and preparations for the NATO summit to be held in Madrid on June 29-30, and the Estonian PM highlighted Germany’s contributions to regional security Baltic.

According to Kallas, the focus at the Madrid summit should be on decisions reflecting the evolution of the security situation in Europe. “As a country on NATO’s eastern flank, what we want is more allied forces, aircraft and ships in Estonia,” she said.

The war will not end overnight because Russia’s goal of destroying Ukraine remains the same.

We must continue to help Ukraine. As the Ukrainians said: the best humanitarian aid is military aid.

Germany has a leading role to play in stopping Putin’s war machine. pic.twitter.com/5BqdeH7BID

Thursday’s visit to Tallinn follows Baerbock’s meeting with the foreign ministers of Estonia, Latvia and Lithuania in Riga on Wednesday.

She will end her multi-day visit to the Baltic countries in Lithuania on Friday.