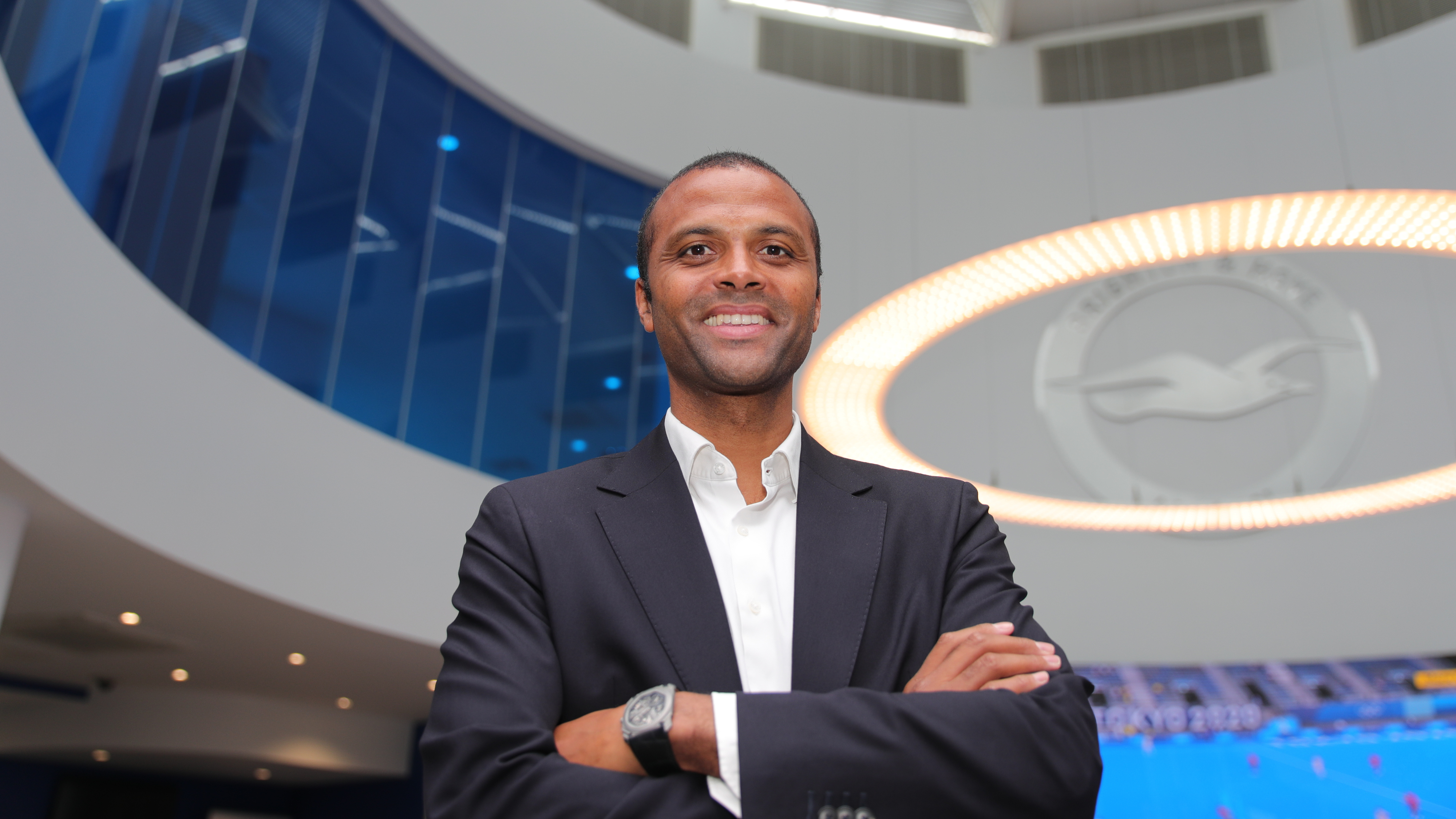 To celebrate Black History Month, we spoke with Maheta Molango, who told us about her remarkable journey from Albion to the Executive Director of the Professional Footballers Association.

Maheta, you might have raised your eyebrows when you took over as Managing Director of the PFA this summer. Since leaving Brighton, what has been your career path?

I returned to Spain in 2007 [Maheta had started his career with Atletico Madrid] continue my studies and obtained a law degree in political science. I then had the chance to be hired by the large law firm Baker McKenzie and I co-founded the firm’s sports practice, advising players, clubs, agents and federations. I then served as legal advisor to my first club, Atletico Madrid, which led to my appointment as CEO of Real Mallorca. All of these experiences gave me the perfect setting to take on this prestigious role within the PFA – an organization of which, of course, I was a member while in England.

In addition to your degree, you are fluent in five languages ​​and you also have the New York Bar Exam on your resume. Has education always been important to you?

I had very demanding and disciplined parents who always told me that football was not a career option. So studying was never an option, it was an obligation. It was something I had to do and even when I was playing for Brighton I was still studying, with my notes, my books, before I finished my studies in Madrid. I was at a point in my life where it just felt right to hang up my boots and once named by Baker McKenzie I had moved on to a new phase in my life. I learned very quickly that there was an opportunity to support different players in the football industry because the game was changing. It was becoming more and more international and the law firm I worked for was also global.

You negotiated Mesut Ozil’s termination agreement at Real Madrid, before his transfer to Arsenal. You have also worked on contracts such as Mario Mandzukic at Juventus, Raul Jiminez at Benfica and Antoine Griezmann’s first contract extension. Tell us more …

First of all, at no time did I act as an agent – this is very important to understand. I worked in legal representation: renewal of player contracts, negotiation of the contractual agreement, while still working hand in hand with the agent and the player. I was basically the legal support for the agent and the player, which was very, very interesting because I got to see how the agents interact with the players, getting to know the players and the clubs involved personally. I got to see how everything worked from a neutral legal standpoint instead of just being involved in the business side of the deal.

As you say, your next job was that of CEO of Real Mallorca. It’s a role that requires many facets, so was it particularly difficult?

It’s one thing to play football, it’s another to be legal counsel, and then there is the role of the general manager, which requires you to acquire completely different skills. Yes, I had played the game, yes I was involved in some very interesting transactions as a lawyer, but to become an effective managing director was for me a welcome return to reality as the role went far beyond the just understanding the game. You run a business, a very special business, with a number of employees. There is ticketing, marketing, sponsorship… It’s a global position, as Paul Barber will undoubtedly admit, where I supervised the entire football operation as well as the business side – a real challenge but one that would take me too seriously. liked it a lot.

Give us an example of the challenges you have encountered …

People don’t realize that the business / operational aspect doesn’t always fit perfectly with the interests of the football team. For example, when the sales team wants to organize an event on a Thursday night with a player, it is not always possible for the player to be present before a big game. Conversely, the coach may wish their team to take a private jet, which is seen as an added cost to the business side, although a huge plus for the sports side, as they will arrive fresh at their destination. It is therefore very important to have someone who can bridge the gap between the sporting side and the commercial side. Yes you are all part of the same club but the different departments have different interests.

Real Mallorca have enjoyed a period of success under your tenure, haven’t they?

When we joined the club they were in fifth place from the bottom of the second division and were really struggling, despite the fact that the squad was quite established and it was a traditional team historically. The following season we ended up being relegated, mainly due to the disastrous way the club got kicked off the pitch. We were losing money everywhere. Yet in two years, just by changing the culture on and off the pitch, we’ve won back-to-back promotions, which is the equivalent of moving from League One to Premier League here. It was spectacular and then you end up playing Real Madrid with eight players who were with you in the third division and you beat them 1-0 at home. My stay there was just a fantastic experience.

Given your success, did you really need to come back to the rain in England?

To be honest, England was an unfinished business for me. I have wonderful memories of my stay in Brighton, but my stay here as a professional was too short. I felt like I wanted to give more to the game here and so having the chance to be back in English football now is a great opportunity for me to give something back.

What do you plan to bring to your role as Managing Director of PFA?

I was a member of the PFA myself and always thought it was a great organization. The amount of good this does is spectacular and my role is to identify what works – and a lot works – but I think we can do a better job of communicating all the good things we do. We also need to be honest and criticize what we can do best, heed the criticisms that come to us and try to improve. At the end of the day, we’re here to represent our members; they’re the stars of the show and they have a voice more than ever before, but there are some things they can’t solve on their own. Online abuse, discrimination, racism, dementia, device clutter… there are a host of issues we need to work on collectively. The PFA has the ability to influence, and players now see the value of thinking collectively rather than going individually into certain battles.

What do you think of the World Cup which is played every two years?

I haven’t had a chance to see the proposals in depth, so I wouldn’t want to get an opinion based on speculation, but overall device congestion is already a problem in the game. that gamers are human beings and already play so many games. When you get to the end of a season, you want to see the best version of the players in the major finals, not the players who are shadows of themselves due to burnout. Additionally, we need to be aware that saturation coverage leads to people losing interest. The World Cup, for example, is so popular because it’s every four years; it brings an expectation, a unique and often unique opportunity for the players. We have to be very careful. We shouldn’t be changing things that were at the heart of what made us all fall in love with the game.

What memories do you have of playing for the Albion?

I couldn’t have started my career better in Brighton, my career in England. We played Reading in the league and the first ball I touched was a goal! I remember a long ball was played by Paul Reid, who remains a good friend of mine to this day, and the next moment the ball is in the back of the net. My dad was in the stands, with my future wife, and it was just a special day for me. It was also a great way to convince the fans, who have always been so supportive, so encouraging during my time at the club.

Do you always stay in touch with the club?

Brighton is a club that will always hold a special place in my heart. It wasn’t always easy but I really enjoyed my time at the club. Whether I play well or badly, the people there have always shown immense respect. They cared about me, made me feel at home, and I always exchange messages with Derek Allen, the former club secretary, or go for coffee with Dick Knight when the opportunity arises. I will also share texts with Dean Hammond, Adam El-Abd, Charlie Oatway, Michel Kuipers, people that I respect a lot. Some 14 years have passed since I left the club, but I have kept in touch because they have all treated me so well.

The club has come a long way, hasn’t it?

It was a different club back then, playing Withdean and training in college, but having been a part of that era I can really appreciate the spectacular work of Tony Bloom and Paul Barber. Amex stadium and Lancing training ground is something to be very proud of. It should also never be taken for granted as it was not clear at the time that Brighton would play today in a beautiful Premier League stadium. I can draw parallels between the club’s progress and mine. Both are examples of resilience, of knowing what we wanted to accomplish. For me, getting the right education was integral to my progress, while in Brighton it was all about recruiting the right people, on and off the pitch. The club has the right owner, the right general manager. You also see Ben Roberts, a fantastic guy, you see Bruno, and of course you see Graham Potter. It is no coincidence that Brighton is where they are and I wish them all the best for the rest of the season and beyond.

Finally, it’s Black History Month, so who did you love growing up for?

Of Congolese origin, I admired Patrice Lumumba, who was a politician and independence leader. He was the first Prime Minister of the country after independence from Belgium. On a similar theme, Nelson Mandela is also someone I admire for the struggles he went through in his country and what he achieved later in his life. More recently, what Barack Obama has achieved in the United States is remarkable. When I studied there for a year I was lucky enough to attend an event where he was speaking and it was just spectacular. Becoming the president of the most powerful country in the world has given such a strong and powerful message, regardless of the political opinions of the people.

* This interview is taken from Albion’s day schedule against Arsenal. To purchase your program, please click here.