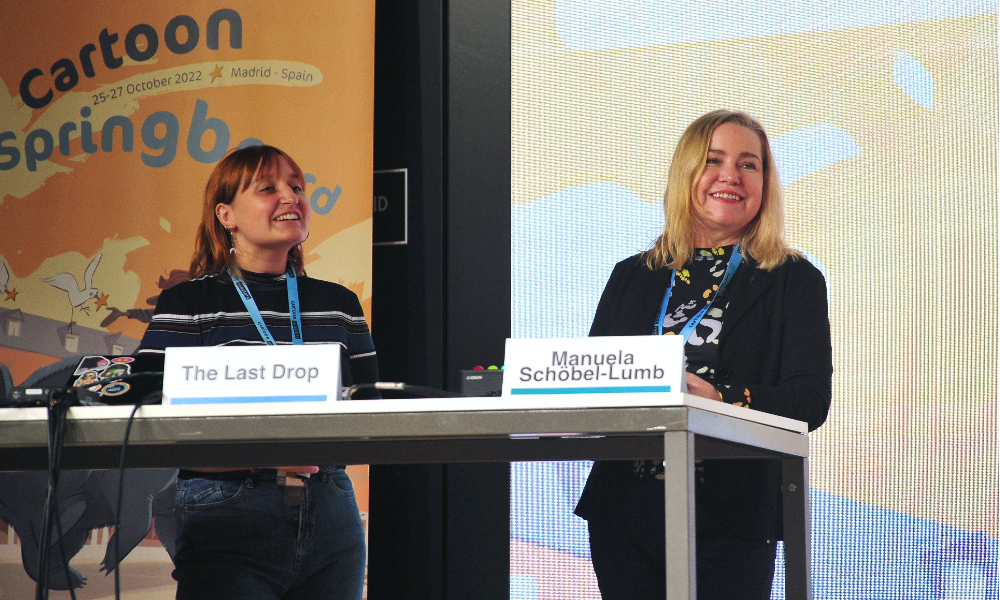 The eighth edition of Cartoon springboard welcoming young animation talent from across Europe to Madrid, Spain, from October 25-27, to showcase their next-gen projects and offer attendees a view of the themes, art styles and preferred formats to which the industry can expect in the near future.

The first Madrid Cartoon Springboard event was organized like never before by the European animation organization CARTOON.

Spanish animator, screenwriter, producer and director Sergio Pablos (KlausThe SPA Studios) opened the event with an inspiring master class on developing stories for the approximately 170 participants from 24 countries present at this event, supported by Creative Europe – MEDIA, the Region of Madrid, the City Council of Madrid, Madrid Film Board and ICEX Spain Trade and Investments.

With professionals from 13 countries, the conferences organized during the event explored the latest trends and challenges facing European animation. In addition to Pablos, guest speakers included Telidja Klai (Belgian public children’s channel Ketnet-VRT), who spoke about the definition of target audiences; Daniella Gallegos (Tribes Media – Glitch, Netherlands), which reflected on the role of VoD services; and Louis Jacobee (Groupe Gallimard, France), which looked at the relationship between the publishing and animation industries.

Developed by students or recently graduated screenwriters, directors or producers from animation schools based in Belgium, Croatia, Czech Republic, Denmark, France, Germany, Hungary, Ireland, Italy, Netherlands Netherlands, in Slovakia and in Spain, the projects were pitched in front of a panel of 26 experts in order to ensure their creative and financial reinforcement.

With six projects, Spanish animation leads the line-up, followed by France (four), the Czech Republic (three) and Denmark (two). Germany, Belgium, Croatia, Slovakia, Ireland, Italy, the Netherlands and Sweden were present with one project each.

Comedy was king, expressed in a range of genres from romantic to the most absurd and dark humor. Freely expressed approaches to current social challenges – such as inclusivity, diversity, immigration, environmental issues and ecological anxiety – also stood out among the 23 selected projects.

In terms of format, TV series topped the list with 15 works, while web series continued to gain traction with six projects, confirming their importance as a memorable introduction for new talent in the global industry. The selection also included two feature films and a TV special.

In terms of target audience, animation aimed at Young/Adult audiences represents almost half of the selection (46%). The rest was split between projects for children aged 5 to 11 with 34% and for family audiences with 12%, while projects for preschoolers and teenagers represented 4% each.

Good vibes. More than half of the projects were listed under ​“Comedy”, 14 in total, and 13 projects were defined as ​“Adventure,” expressing the next generation’s eagerness to pursue a positive approach to animation. Popular projects included Apocalypse Mojito (Animation Without Borders), beanboy (The Animation Workshop), luckily ever after (Tomas Bata University), KAHIBO (Filmakademie Baden-Württemberg), Missing pieces (Campus La Salle Barcelona – Universitat Ramón Llull) and Salted bananas (Academy of Fine Arts, Croatia).

Contemporary challenges. Sustainability is addressed in multiple projects – the future of our planet is in question, and the answer is sometimes absurd or extreme, as in Garbage (FAMO, Czech Republic) or the last drop (Polytechnic University of Valencia). Diversity also emerged as a major concern, with projects touching on racism, LGBT issues and mental health at the forefront Awa in the desert(University Pompeu Fabra) or For an hour and a half (EMCA, France).

Women behind the camera. As for the creative teams supporting the projects presented on stage, Cartoon Springboard saw a strong show for women in animation: 42% directors and 44% project leaders.

New business models and alliances. When young creators and producers join forces, it’s for the best! Some have even already financed their creation studio, for projects Eva and the world, Fridge & Television (U-tad, Spain) and The Cherry Brothers (Goblins). Others relied on support from their regional fund, such as Ajo West! with NAS (New Animation Sardinia).

A strange world. Absurd humor and dystopia were favorite subjects in Apocalypse Mojito, Fridge & TV, luckily ever after, Missing pieces and salted banana.

Without dialog. A few projects decided to do without words, at least not understandable language; notably 9 million colors and Lazaro (La Poudriere, France).

Stunning visuals. Stop-motion, animation on live shots and ultra-colors at the rendezvous 9 million colors (FAMU, Czech Republic), For an hour and a half, dark dark woods, overrated and The Cherry Brothers.

Telepathic sympathy. In the minds of several creators, there was the possibility of entering someone else’s mind, reading it and better understanding the emotions and feelings, as in beanboy, Eva and the world and Rille and Julia (Vancouver Film School).

Since the first edition of Cartoon Springboard in 2015, a total of 190 projects have been presented, nine of which have been published and another 60 are in active development. The event was marked as a first step ahead of CARTOON’s co-production events for anime series (Cartoon Forum) and feature films (Cartoon Movie).

Cartoon Springboard will return to Madrid for its next edition, which will take place from October 24 to 26, 2023. Visit cartoon-media.eu for more information.