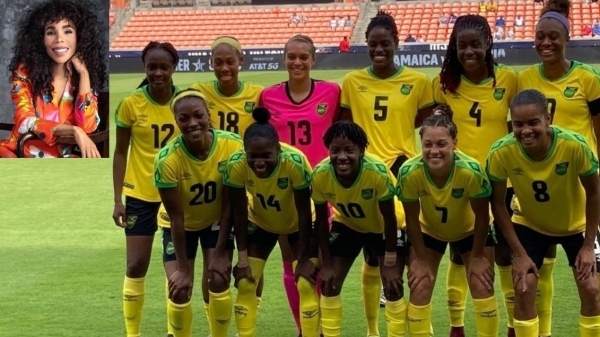 Cedella Marley, CEO of the Bob Marley Group of Companies) currently in her seventh year as the Jamaican Women’s Football Program Global Ambassador, is now expanding her advocacy and commitment to women’s football.

Its new Football is Freedom initiative will provide tools and resources for the development and growth of women’s football in the Caribbean and Latin America as well as in diaspora communities in the United States.

“As part of my role as Ambassador, I have taken note of the crucial role that football can play in empowering young women; through educational and career advancement opportunities – both on and off the pitch, ”said Marley.

“Thanks to the Football is Freedom initiative, we can expand our efforts to other countries in the region and possibly beyond.”

The main mission of the FIF is to support the development of women’s football at the local level in the region by funding existing programs and academies in the islands and in diaspora communities in Canada and the United States, by supporting the growth and the development of national teams. by organizing an annual exhibition match and a mini-tournament to provide a quality training experience and raise funds that will go directly to the women’s programs of the participating federations as well as to invest in the holistic well-being of the players by funding scholarships and programs that help players with skills and tools to help them succeed outside of football when that time comes.

The launch of Football Is Freedom revolves around an international fundraising friendly match between the women’s national teams of Jamaica and Costa Rica. In addition to helping fund the new initiative, a portion of the proceeds will be donated to each national team.

Marley is especially happy to have Costa Rica join Jamaica on the pitch at DRV PNK Stadium.

“In 2014, I had the honor of attending the FIFA U-17 WWC Final in Costa Rica (as a guest of the late Captain Horace Burrell). The Costa Rican federation’s investment in women’s football helped inspire my own ideas about the impact women’s football could have had once the right support was given. Bringing together two of our strongest women’s teams is a chance to demonstrate the potential depth and power of women’s football in this region, ”she said.

Reggae Girlz and Las Sele both arrive in South Florida on October 18 for a week of practice and a two-game series. In accordance with the COVID protocols mandated by FIFA, the delegations will be accommodated in protective isolation during the camp. The first game will be a closed-door scrum and the final will be a fundraising game open to the public. The camp is the result of a combined effort of the Bob Marley Foundation, the Rita Marley Foundation and the Reggae Girlz Foundation.

The match is presented by Cedella Marley in association with Black Tower Agency.

The Costa Rican and Jamaican federations expressed the importance of the next camp and the initiative itself for women’s football in the region.

“For the Costa Rican Football Federation, it is a real pleasure to be able to participate in the first edition of the festival“ Football is freedom ”. From a sporting point of view, the fact that our players can compete with a team of such a high caliber as the Jamaican team is extremely important ”, declared Gustavo Araya, general secretary of FEDEFUTBOL.

“And of course, having the chance to participate in the early days of what this foundation is going to do makes us proud. The first edition of this festival, to be held in Florida, will be of the utmost importance to our players in the run-up to the upcoming World Cup qualifiers. We will also take this opportunity to show how a foundation like this can impact young girls and get them excited about sports. “

“I would like to heartily congratulate and congratulate our Reggae Girlz Ambassador Cedella Marley and her team. “Football is Freedom” can only help to broaden interest and accelerate the expansion of women’s football in Jamaica and the wider region, “he said.

“We are particularly proud that the initiative is launched around a camp and an international friendly match involving the Reggae Girlz. This will serve as invaluable preparation for their World Cup qualifiers which begin in November. The Jamaican Football Association stands ready to offer any assistance necessary to ensure the success of this endeavor and we look forward to participating actively in the future.

“On behalf of all the aspiring footballers across Jamaica, I wish this progressive vision to everyone

In addition to the main event, Sunday’s festivities will include a pre-game launch party and fan zone experience with games, entertainment and food trucks, as well as a community market showcasing the small business and diaspora community organizations in South Florida.

There is also a musical performance at halftime.

The event will also be sponsored by Visit Fort Lauderdale, KICS International, the Bob Marley Foundation and Riddims Marketing.

Tickets will be available through Ticketmaster from October 6. For more information on group ticket purchases, please contact the production office directly by email at This e-mail address is protected from spam. You need JavaScript enabled to view it. .