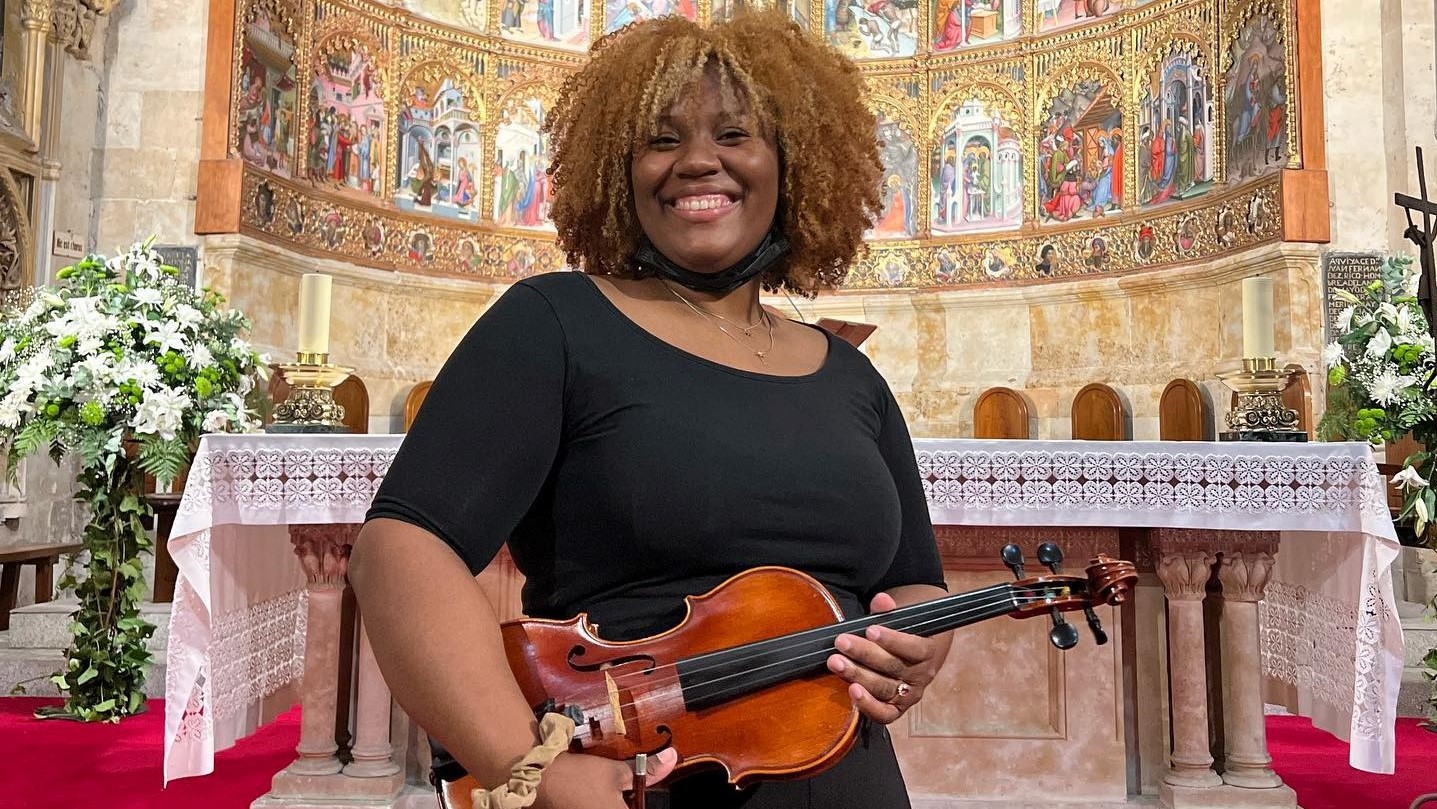 Jacqueline Mills ’18 has an inspiring story of how a liberal arts education continues to benefit her life after Kalamazoo College as her appreciation of music grew from an interest to a lifelong passion.

Before majoring in chemistry at K, Mills started playing the violin at age 9. During her college years, she developed a music outreach program, V is for Violin, where she would visit her old preschool to play the violin and introduce children to the world of classical music.

“A lot of young people knew about rap, pop and other musical genres, but it was a time when arts programming seemed to be on the decline in schools,” Mills said. “The lack of music programming in public schools was one of the reasons I had to look for alternative programs on weekends to further develop my musical talents.”

As Mills progressed, she did not expect music to play the role it did during her college years, instead expecting it to be more of a side interest or an outlet. .

“My mindset was that I had just spent 10 years playing the violin and didn’t want to waste it, so I decided to give it a try,” Mills said.

This essay was for the Kalamazoo Philharmonia, an ensemble of students, faculty, amateur musicians, and professional musicians of various ages who perform three concerts a year under the direction of Music Director and Chairman of the Music Department K Andrew Koehler, who immediately and enthusiastically accepted her into the group and with whom she also takes violin lessons.

Later, her study abroad experiences in Perth, Australia were significant as she interned at the Aboriginal School of Music. On this site, Aboriginal students discover a variety of musical genres.

“I wasn’t in an orchestra in Australia, but it was always nice to have that connection to the music,” Mills said. “I got to know their culture and the other instruments they have. It reignited in me a deeper understanding of music that I wanted to deepen, in the sense that music can be part of my life forever, even if it’s not my profession.

By the time she had returned to K, Koehler had recognized in Mills her growing enthusiasm for music.

“Jacqueline has always been a very thoughtful, observant and self-aware musician,” Koehler said. “These are qualities that I think are really essential to making great music. When you’re in the gym, you have to think about what’s working and what’s not and ask yourself, “How can I bridge the gap?” Jacqueline studied chemistry here at K, so music wasn’t necessarily going to be the central thing driving her. Yet she was truly a gifted violinist. Like all K students, she was busy and had to fight to find time for music, but she always found space to make sure she continued to improve, day after day and year after. year.

Moreover, at that time, Koehler was leading the Junior Symphony Orchestras of Kalamazoo (KJSO), a group representing approximately 42 schools in 23 communities in the region. KJSO has a tradition of self-funded touring for shows which began in Europe in the 1960s and he was planning a trip to perform in South Africa during Mills’ final year.

“She and I were still working on private lessons and she was playing in the Philharmonie,” Koehler said. “She had spent her first year in Australia, so I offered to go with us to South Africa. I said, ‘We can’t go to South Africa every day. Is there a Chances are you’re interested? And she was.

But this was only Mills’ first time touring and performing with KJSO. Last summer, after taking the initiative to approach Koehler about the trip, she toured Spain and Portugal with the band where they had two performances.

“With the experience of South Africa cemented in her mind, when she heard about this new tour, and was already enjoying being more established and working, she reached out to me this time,” Koehler said. “Of course, I was over the moon. I’m always thrilled with any opportunity to make sure a K alum still finds ways to make music. And it was just such a great opportunity to reconnect with Jacqueline especially.

Mills admitted there was a bit of a language barrier spoken in Spain and Portugal that she hadn’t encountered in South Africa, but luckily music is a universal language.

“It was a unique experience, in South Africa as in Europe, to be both a tourist and an artist,” said Mills. “It was more difficult in Spain because I don’t speak the language, so trying to communicate about our concerts was difficult. But it doesn’t matter what your nationality is. If you play well, the music will resonate.

KJSO performed to a small crowd at a concert hall in Madrid before heading to Salamanca, where, Koehler said, it looked like the whole city had turned into a historic cathedral.

“There was an intensity to the experience,” Koehler said. “It was so special to be in this incredible place, to play music that combines American composers, a Portuguese composer and, of course, a Spanish composer. There was a kind of cultural ambassador that we were trying to performing with the program, and sharing it with this audience who were wildly enthusiastic and cheering us on, it’s just something we will remember for a long time.

Mills’ story is significant for Classical Music Month, which was first instituted in September 1994 by President Clinton. Its proclamation stated: “Classical music is a celebration of artistic excellence. This month, we celebrate the many talented composers, conductors and musicians who bring classical music to our ears. Music is a unifying force in our world, bringing people together across vast cultural and geographic divides.

In his professional life, Mills worked in a laboratory as a quality control chemist. She has also done research on sickle cell disease. She now works with the city of Detroit in an adult education program called Learn to Earn, which aims to break intergenerational poverty and position job seekers on a path to the middle class. Yet she still wishes her career would give her time to bring classical music to the ears of children and people around the world.

“In the short term, I’d like to join a community orchestra,” Mills said. “But in the long term, I hope to start a non-profit organization or foundation to provide instruments and classical training to underrepresented children in order to celebrate and invite young people into the fine arts. In my experience, having continued access to instruments and private lessons at a young age can be half the battle and I want to bring that support to my community. I would also like V is for Violin to pick up where I left off by going to kindergartens and elementary schools and introducing children to the world of classical music; showing them it’s not a dead art confined to a specific race and gender. Music is a universal language that can take you anywhere, and if I can do it, they can do it too.

Koehler said he’s proud not only of K music majors, but of all K students like Jacqueline who continue to make music a permanent part of their lives.

“Of course, it’s very rewarding to work with students who really dive with us in the musical realm,” Koehler said. “But no less valuable, in terms of what we offer a liberal arts campus and in terms of what we aspire to in our teaching, is to see students who make space for music as part of their education. a fuller and truly human existence. My hope for those who have played in the Philharmonie or in one of our ensembles, whatever their background, is that the music remains part of their experience, as it did for Jacqueline.