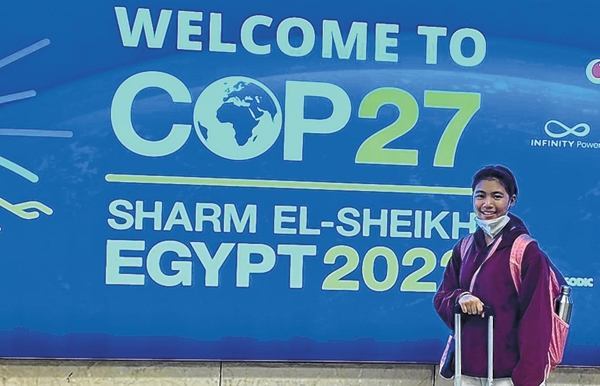 CAIRO, November 6
Eleven-year-old climate and environment activist Licypriya Kangujam has arrived in Sharm El Sheikh, Egypt to attend the UN Climate Change Summit COP27, which begins today.
Egypt is hosting the United Nations Climate Change Summit, also known as COP27, from November 6-18. COP27 represents the world’s last best chance to limit global warming to 1.5°C, turn Paris commitments into action and help build a sustainable future for all. .
Licypriya will intervene in 3 different sessions as an observer and speaker.
This is the second time that Licypriya has taken part in such a high level UN event. She had participated in the COP25 held in 2019 in Madrid, Spain. Last year she missed the Glasgow Summit (COP26) due to COVID-19 travel restrictions.
Licypriya said this year’s COP27 Climate Summit is very crucial in bringing climate justice to the millions of poor and vulnerable people in the Global South who are already victims of climate change.
She said: “Children are dying because of the war in Ukraine. Children are dying from air pollution and the heat wave crisis in India. Children are dying from flash floods in Pakistan. Children are starving in Ethiopia. Girls are not educated to fetch water over long distances in Africa. Sacrificing the lives of millions of children for the failures of our leaders is unacceptable at all costs.
“Instead of spending billions of dollars on wars, if we spent them on ending poverty, providing education and fighting climate change, what a beautiful place our Earth would be,” she said. .
40% of the insect population has disappeared, 70% of wild species have disappeared, 69% of the forest has disappeared, 40% of the Himalayan glaciers have disappeared. “If we don’t know how to fix it, please stop breaking it,” she said.
At COP27, she said: “I will demand that our world leaders give us clean air to breathe, clean water to drink and a clean planet to live on. I will also urge leaders to make climate education mandatory in all school curricula. There will be no climate solution without climate education. COP27 is our last hope. They [world leaders] we have already failed 26 times in the last 26 COPs but this time we don’t want them to fail again. For us, COP27 will decide life or death.
Responding to a question posed by the media, she said governments must work together to manage a just transition away from coal, oil and gas, which are the main causes of the climate crisis. Now is a good time to sign a fossil fuel non-proliferation treaty to ensure our secure future and a secure and equitable planet.
Rich and developed countries must put in place concrete climate actions on the loss and damage caused by the climate crisis in developing countries. There will be no climate justice without climate finance, she said.
Over 45,000 registered COP27 participants and more than 120 heads of state and government are attending the summit. US President Joe Biden, British Prime Minister Rishi Sunak, French President Emmanuel Macron, German Chancellor Olaf Scholz, Italian Prime Minister Giorgia Meloni, Brazilian President-elect Lula de Silva among other world leaders are in attendance.
The Indian delegation will be led by the Union’s Environment Minister, Bhupender Yadav, who arrived in Egypt on Saturday. India will seek to clarify the definition of climate finance and call on developed countries to improve the supply of technologies and finance needed to address climate change and resulting disasters.
It can be noted that Licypriya is one of the leading voices of climate change in the world. She is from Manipur, India. Recently, she attended the United Nations General Assembly 2022 in New York, USA.