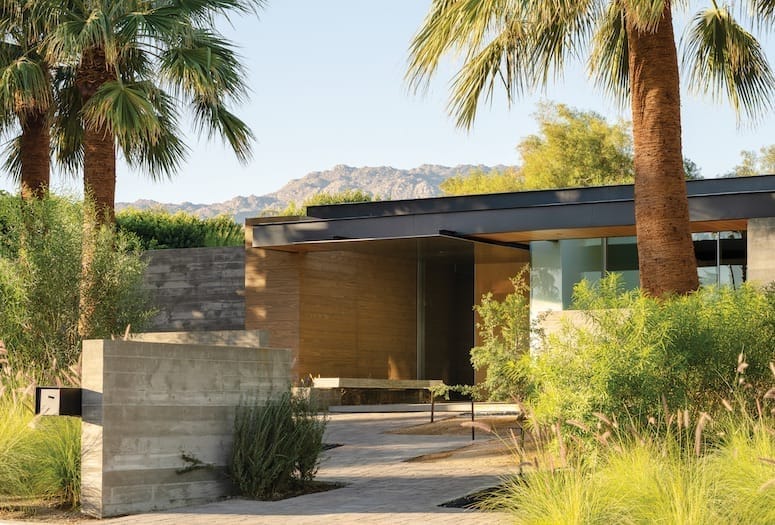 Today, the house that speaks an international language gives another boost to regional architecture while providing a foundation for the couple’s design-build growth.

With five projects underway and more in the planning stages, their next step will bring clubs modernist specimens filled with mid-century materials, but only where they are welcome. They recently got laid off from a job behind the doors when the HOA insisted on rounded corners, molded columns, a gable roof and smaller windows. Floor-to-ceiling glass? Verboten. “Even though they loved our design, they totally opposed it,” Castaneda says. “For this club, modern architecture is a trend. They prefer a conventional Mediterranean style to maintain their guidelines. In their world, function follows form,” so the business ended before it began.

A word of support on devoted beliefs came from Bueso-Inchausti’s architect father. She comes from a line of architects and developers in Spain, and the couple had interned during the summers at her practice. His advice: Never do anything you won’t be proud of. “It takes two to three years for a project to become a reality,” explains Castaneda. “He was saying that if, at the end of all this hard work, you’re not going to be proud and want to show it, then don’t bother doing it.”

Bueso-Inchausti takes a nostalgic look at the custom furniture they designed for the home and a favorite shaded seating area under a new wide overhang. “We try to balance what we think is best for the city with what we think is best,” she says. “It makes us proud while earning a living.” A very modern life.