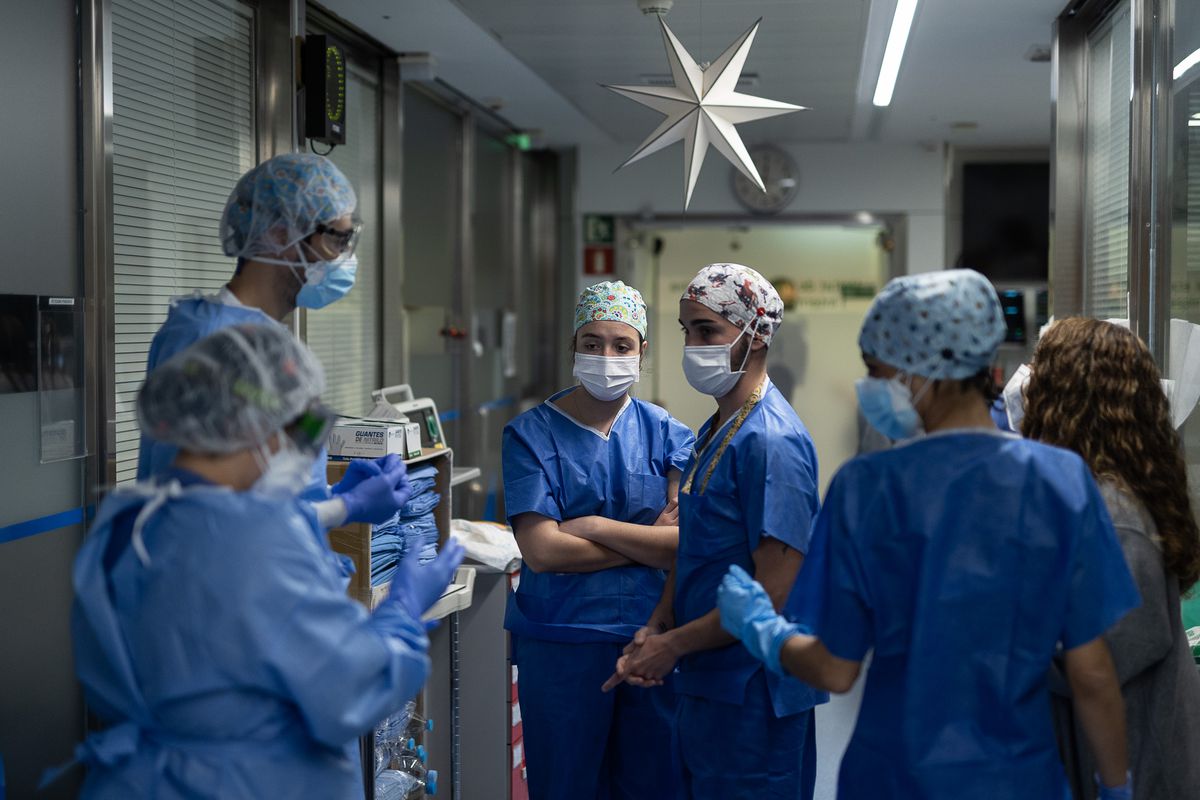 Coronavirus infections are everywhere in Spain right now: no school, office, group of friends or family is safe from a case close to them. â€œEveryone knows someone who has caught the Covid in recent days,â€ explains physicist and expert in computational biology, Clara Prats. The sixth wave of the pandemic hits Spain and breaks all records. Hospitals across the country are holding up well, however.

On Thursday, for example, the highest number of infections in a day was reported: nearly 73,000. The incidence over 14 days, meanwhile, rose to 911 cases per 100,000 population. This is also a record for Spain, even compared to the very high levels seen in the third wave.

So what is the particularity of this new wave of viruses? First and foremost, there are conditions that amount to a perfect storm: There are few restrictions in place, the immunity offered by Covid-19 vaccines wanes, and a new variant, the more contagious omicron, is spreading rapidly.

In just a matter of weeks, the world was turned upside down again, with widespread infections, closed borders and severe restrictions introduced in parts of Europe. In Spain, primary care centers are on the verge of being overwhelmed, there is a lack of supply of home antigen testing in pharmacies across the country and hospitals – far from crowded – are holding their breath in the face of rising admissions. The next few days will be crucial to calibrate the severity of this wave, experts warn.

According to Prats, the sixth wave is actually â€œtwo waves in oneâ€. â€œThere was a start with the delta variant, which got complicated with the omicron,â€ she explains, referring to the two strains of the coronavirus that are circulating widely. â€œIn the fall, the curve gradually climbed, as if it were in slow motion and with a margin of reaction. But suddenly omicron comes along and changes everything overnight. It first arrived in Madrid, then in Catalonia and it started to spread. Once you hit 40% omicron, infections increase.

According to the latest report from the central health ministry, based on preliminary data from December 6 to 12, 47% of the samples analyzed were omicron. The new strain builds up on what has been dominant until now: delta. In fact, some areas are already reporting higher numbers, such as Madrid, where the strain accounts for 80% of cases.

In the field, health centers are struggling to cope with queues of patients waiting outside, and staff are on the verge of burnout. Patients are desperate for antigen testing to confirm if they have an infection, or eagerly awaiting a call from contract tracers. Or they just stay home to see what’s going on.

There is a feeling of “widespread chaos” in the streets, in the words of epidemiologist Mario FontÃ¡n. “There is chaos because people need their symptoms to be confirmed in order to be eligible for medical leave,” he explained several days ago. â€œA feeling of greater chaos was created compared to the severity required by the clinical picture. But this snowball that is growing right now is a few weeks old.

One of the first things to spur the resurgence of the virus was the easing of restrictions. When the epidemiological curve started to climb in early November, there were hardly any restrictions in place other than the masks inside. Now, six weeks later and with an incidence 18 times higher than then, the so-called ‘Covid passport’ is used to gain access to certain spaces, while the government has reintroduced mandatory masks outside – a measure of dubious effectiveness according to connoisseurs. Only seven of the 17 regions opt for more severe measures, such as limits on opening hours and capacity, and in the case of Catalonia, also a curfew and limits on social gatherings.

This is why the Spanish government is speeding up the administration of booster doses, focusing on vulnerable groups such as those with weakened immune systems and the elderly – 86% of those over 70 have already received their third injection, while that for those over 40, the figure is 45%.

Prime Minister Pedro SÃ¡nchez announced last week that anyone vaccinated with the Pfizer-BioNTech or Moderna vaccines would receive a third dose six months after the second. The central government wants to see 80% of those over 60 vaccinated before the end of the year, and all over 40 by early March.

This drop in vaccine protection, combined with the current season of strong social interaction and movement due to the national holidays of December 6 and 8 and the Christmas holidays, ended up fanning the flames of a fire that began with delta and spread thanks to omicron.

Daniel Prieto-Alhambra, pharmacoepidemiology researcher at the University of Oxford, points out several characteristics of this wave. “If you think of the sixth wave with delta, the key to progress depended on vaccination and restrictions in different countries,” he explains. “Here in the UK, for example, masks weren’t used in summer, even indoors, whereas they were in Spain.” This difference, coupled with a higher vaccination coverage rate in Spain, resulted in 20 times higher incidences in the UK during the autumn. “However, if we focus on the sixth wave with omicron, the key is that it has a greater ability to infect people who have been vaccinated than delta, but like the majority of infections in people who have been vaccinated, the percentage hospital admissions is much lower than in previous waves.

Omicron has homogenized the situation across Europe – and in a bad way. JosÃ© MartÃ­nez Olmos, professor at the Andalusian School of Public Health, explains that â€œbefore omicron, what made [Spain] different from other countries was the best vaccination coverage and a greater tendency to be outdoors due to the climate, but now with this variant the infections are the same. There are no borders, â€he says.

The only positive outlook can be found in preliminary studies from South Africa, Scotland and England, which indicate this wave is less severe. In fact, in South Africa, where the new strain was first identified, the curve appears to flatten after four weeks of rising and in fact starting to drop, according to the Our World in Data website.

But the impact of this wave could still be “devastating”, say the experts. A flood of new infections will mean – in absolute terms, but not as a percentage – more hospitalizations and stress on the healthcare system. “A small percentage of a very large number is still a large number in terms of impact on the population,” warns Prieto-Alhambra. â€œIf nothing is done, even if omicron is half as severe as delta, we will be in a catastrophic scenario. This would double the peak of previous waves.

In Spain, at the beginning of February 2021, in the middle of the third wave, there were more than 30,000 Covid-19 patients in hospitals. In intensive care units (ICU), there were more than 4,800. At present, there are far fewer: 7,924 patients, including 1,515 in intensive care, according to the latest report from the Ministry of Health. Hospitals are not yet suffering from other waves. But the outlook is not good, according to Toni Trilla, head of epidemiology at ClÃ­nic hospital. â€œOver time, the health care system was under sustained stress and overwhelming, difficult-to-manage work in the primary health care system. “

Experts also criticize the lack of communication from the authorities during this sixth wave. Elena Vanessa MartÃ­nez, president of the Spanish Society of Epidemiology, complains that â€œwe haven’t learned anything. We had to strengthen the primary health system and the public health infrastructure, as they were essential as the first shield against the virus, and this was not done. People feel that restrictions are unnecessary, and that testing is enough. And people are looking for tests because they see them as their salvation, because there are no other measures. “

Magda Campins, head of epidemiology at Vall d’Hebron hospital in Barcelona, â€‹â€‹agrees. â€œCommunication from politicians and public health is very bad,â€ she said. “Until recently, they said there would be no restrictions, and when you put that message out, people are trusting it.”

There are still many unknowns on the evolution of this new wave, and especially on its severity. The coming days will be decisive, experts insist, as will the restrictions taken to contain the infections. Relying on vaccination alone, they warn that this will not be possible, although they add that the administration of the third doses should be accelerated.

Since the summer, explains Prieto-Alhambra, “Spain has fallen into complacency and third doses are coming more slowly than in the United Kingdom, which has already given a booster to 54% of its population over 12. year”. Speeding up these injections was another of the strategic approaches announced last week by Prime Minister SÃ¡nchez in an attempt to slow this sixth wave.

All in all, the race against Covid-19 is far from over. “This virus is capable of changing dramatically, whether slowly or with big strides,” says Pumarola. â€œWith the measures we put in place, we ourselves force it to change constantly. The H3N2 influenza virus caused a pandemic in 1965 and to this day it causes tension when it returns. Well, that’s what’s going to happen with Covid. “