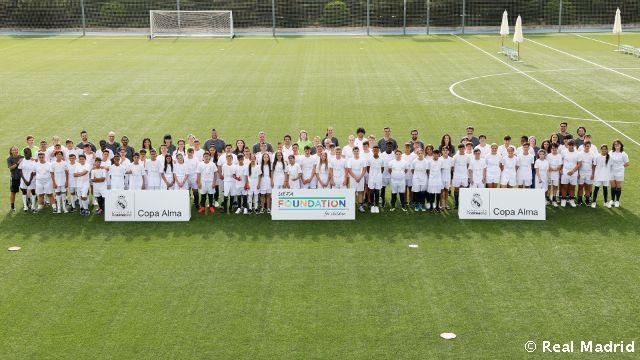 It will be held in Madrid in collaboration with the UEFA Foundation for Children.

The Real Madrid Foundation organizes the eighth edition of the Copa Alma and, after a two-year break due to the pandemic, it will be held in Madrid. Eighty students from socio-sports schools in Spain, Romania, Portugal, Hungary, Bulgaria and Morocco will benefit from a multicultural experience over several days of sport and values ​​while sharing their passion: football as a common language.

This edition will be organized in collaboration with the UEFA Foundation for Children. New will be the launch of the Copa Alma channel on the Sports Values ​​Academy interactive TV platform, which will feature videos including challenges such as Flying Goals or a Grand Prix and alternative sports such as roundnet or futsal, whether participants will have seen. then put into practice in the field. In addition, on the day of the closing, the matches will be broadcast live and interviews with the participants will be posted online.


In football games, the focus will be on moral values ​​through initiatives such as the selection of a values ​​MVP. After each match, the teams will discuss which player from the opposing team is most representative of the value they focused on during the working day. There will also be a third cooling-off period to determine the opposing team’s value score, and the ‘White Card’ program will be implemented, which recognizes good attitudes from players participating in the competition.

The event will be led by the technical directors of the socio-sports schools in order to ensure the proper transmission of Real Madrid Foundationthe work philosophy of , based on the methodology ‘Por una Educación Real: valores y deporte’ (“For a real education: values ​​and sport”). In addition to playing football, the participants will take part in different activities, including a visit to Madrid and a musical show between the participants.