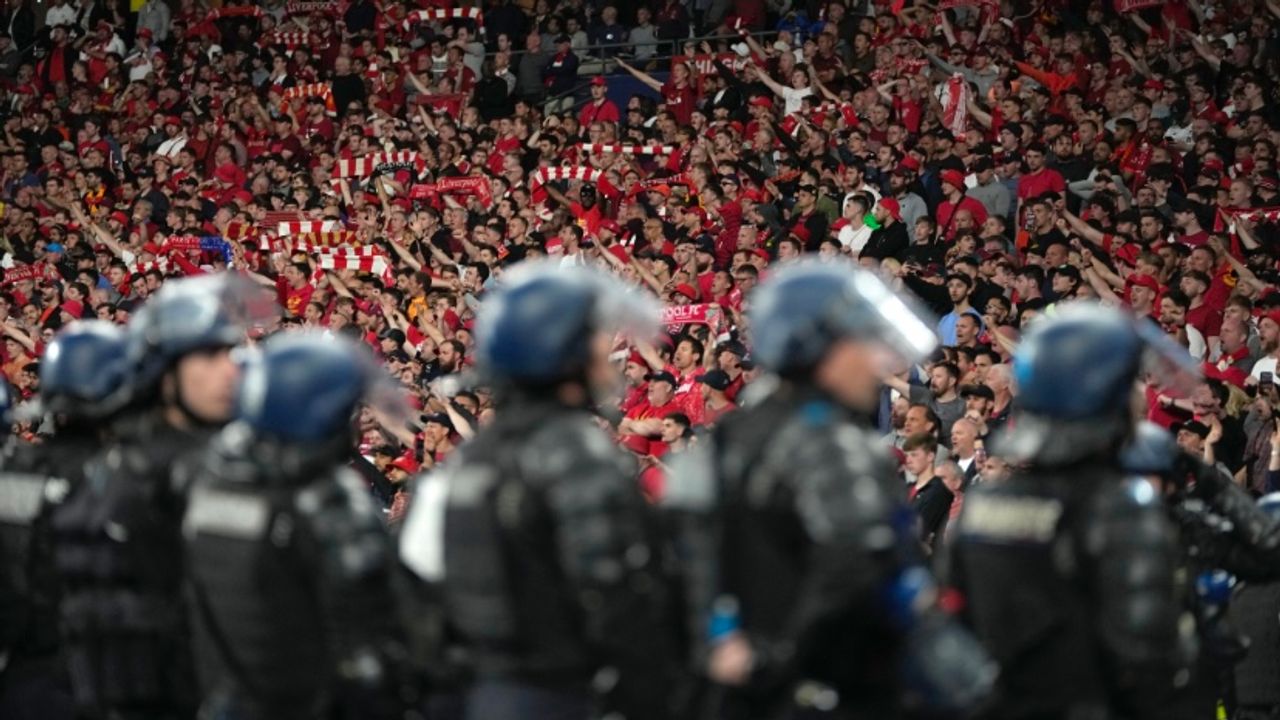 On May 28, the Stade de France in the northern suburbs of Paris hosted the UEFA Champions League final between Liverpool and Real Madrid. Fans endured what a Liverpool supporters magazine called “five hours of hell” as they were assaulted by police before the game.

Prior to the match, Liverpool supporters, including children, pensioners and disabled people, were gassed and beaten by police outside the stadium. A video viewed over 9 million times shows a French cop spraying fans standing peacefully behind a fence.

Another video showing fans desperately climbing fences and jumping over barriers to avoid suffocation has received over 4.5 million views.

Kick-off for the final, watched on television by an estimated 400 million people worldwide, was delayed by 35 minutes. Even with the delay, thousands of Liverpool fans with tickets only entered the stadium at half-time. Fans were also assaulted after the match as they left the Stade de France.

The police rampage against football fans exposed before a global audience the brutality and brutality of the French police and the government of President Emmanuel Macron. The government responded by smearing Liverpool supporters and defending police brutality.

The extent of the cover-up became clear on June 9, when Erwan Le Prévost, director of the French Football Federation, told BFM-TV that CCTV footage from security cameras around the Stade de France had been removed and were probably unrecoverable. He said the tapes were automatically destroyed after seven days because they had not been requested for review by the police or any other authority. Yet civil liberties lawyer Théo Leclerc said The Express“The police did not need the public prosecutor to requisition the images.”

The police obviously did not request the security camera footage, as it would have shown what other camera footage showed: a blatant police assault on peaceful supporters. It also exposes all the lies Macron government officials have used to excuse and justify the police rampage.

On Monday May 30, the French Minister of the Interior, Gérald Darmanin, denounced a “massive, industrial and organized scam of counterfeit tickets”, saying that “30,000 to 40,000 supporters found themselves at the Stade de France either without tickets, either with forged tickets”, before turning in to imply that it was only a problem with the English fans.

Darmanin continued by thanking “all the police who, by their calm, avoided a tragedy”. On June 1, Darmanin told the French Senate that the responsibility for the violence lay with the city of Liverpool: “It is clear – all the notes from the security services say so – that the people of Liverpool pose problems of public order” .

Darmanin’s comments echoed those made by British officials in the aftermath of the Hillsborough disaster in 1989, blaming “armored mobs” for the deaths of 97 Liverpool fans. In fact, they were crushed to death due to a blatant police error in handling the crowd movement at Sheffield’s Hillsborough Stadium.

In the days following the May 28 final, errors were reported in the stadium’s digitized ticketing system, and the estimated number of counterfeit tickets was reduced to 2,589. Yet on June 10, the French minister for Sports admitted that 2,700 real tickets were never activated. Beyond Darmanin’s claim, there is no evidence to suggest that Liverpool fans tried to get to the final with fraudulent tickets.

Liverpool left-back Andrew Robertson has expressed his disbelief at the allegation of ticket fraud by Liverpool supporters, telling Sky Sports: “Obviously my tickets were [supplied] through the club, and somehow someone told a friend of ours that he had a fake ticket, which I can assure you was definitely not the case. Robertson added that a number of relatives of Liverpool players have been caught up in the violence: “Almost all of our families have been affected.”

There is no clear evidence that Liverpool fans were even acting disorderly, let alone criminal, when approaching the stadium. Former Irish manager Brian Kerr, who attended the final, told extra.ie: “The Liverpool fans were perfect in their demeanor”, while the French police “looked like they were ready to to fight”.

French police appear to have heavily targeted Liverpool supporters, including the players’ families and friends. Moreover, although Liverpool and Madrid supporters had ticket problems in roughly equal numbers, Liverpool supporters suffered disproportionately. According to Darmanin, only 50% of Liverpool fans were seated at the Stade de France at 9 p.m., the scheduled kick-off time, compared to 97% of Madrid supporters. This raises the question of whether the French authorities deliberately tried to interfere with the atmosphere and the outcome of the match.

Either way, the crackdown at the Stade de France is yet another reminder of the class violence inflicted by Macron’s police.

Former Liverpool player and pundit Jamie Carragher summed up the feelings of many Liverpool fans by tweeting: “Liars @GDarmanin @AOC1978 [the account of French Sports Minister Amélie Oudéa-Castéra] @UEFA video evidence proves how corrupt you all are. Margaret Thatcher and Norman Bettison again.”

A Liverpool fan named Peter, who attended the final, told sofoot.com: “As a Liverpool fan, Hillsborough is always on my mind. We were afraid it would happen again. I experienced this tragedy when I was in my twenties. … This Saturday at the Stade de France, I saw the same police incompetence as at Hillsborough. Miraculously, it didn’t have the same consequences.

Peter added: “You know, I’ve been to France several times. But now I don’t want to go back. I no longer feel safe there, and especially not in Paris.

In previous decades, heads might have rolled in the police force as part of the reaction of the French capitalist government to such an embarrassing event on an international level. This did not reflect democratic sentiments, but the cold self-interest of the capitalist class. Before the COVID-19 pandemic, 9.7% of France’s GDP came from tourism. Additionally, within the next two years, France will host both the 2023 Rugby World Cup and the 2024 Olympics.

Today, however, Macron depends almost entirely on inciting fascist forces in the police to suppress working-class opposition. In his second term, Macron, the ‘president of the rich’, is plotting new and deep cuts in pensions and unemployment insurance, higher university tuition fees and the impoverishment of the working class by global inflation. . For this reason, French officials have chosen to redouble their efforts to support police repression at the Stade de France.

On June 10, the Paris police chief, Didier Lallement, told a commission of inquiry into the event that the management of the final was “a failure because the image of the country was damaged”. He said he was “sorry” for the use of tear gas. Nonetheless, Lallement, who is infamous in France for telling a protesting ‘yellow vest’ worker that she was ‘on the other side’, went on to brazenly defend the assault on the Stade de France, saying that there was “no other way” to make people back down. than firing tear gas barrages at them.

The savage police repression at the Stade de France is a warning to workers, in France and internationally: Macron and all the financial aristocracy, knowing they are isolated and hated, will stop at nothing to defend their class power.