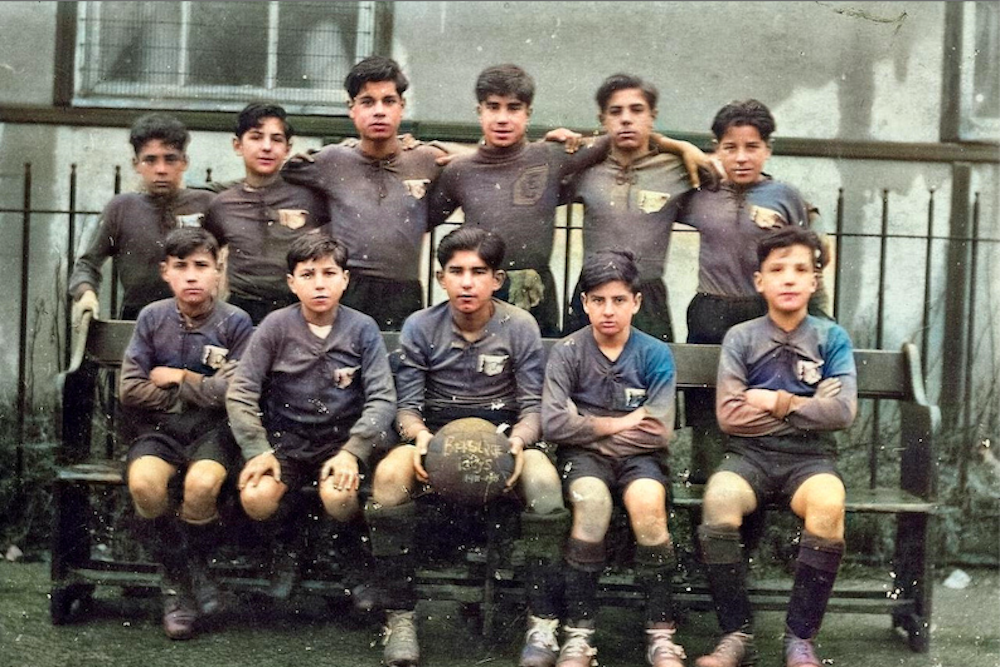 A recent three-day event in Caerleon commemorated the 85th anniversary of the arrival of Basque refugee children in Wales.

Organized by the Basque Children’s Association of ’37, there was a particular focus on the importance of football for the niños vascos (Basque children).

Football has played a huge role in the lives of children in Wales, especially in the colony of Caerleon (see previous Nation.Cymru articles HERE and HERE). It was a form of escape, a pastime to help them forget the horror of the civil war that raged back home.

The creation of the team – Basque Boys AFC – allowed the boys to bond, to create an atmosphere of camaraderie and solidarity, and above all, to have hope.

It was also a means of integration and connection with the local communities of Caerleon and South Wales. The boys helped raise funds for the operation of their accommodation, Cambria House, by selling tickets and match schedules.

The team created a real storm across Wales, achieving great success and rarely losing a match. Their greatest achievement came when they defeated league champions Moorland Road School in front of a few thousand spectators at Ninian Park on 10 May 1939.

Surprisingly, there were three groups of brothers in the team (the Garateas, the Achas and the Espigas). What is not as well known is the success of one of these brothers, Basque Boys AFC goalkeeper Enrique Garatea.

New information has recently been discovered in the archives of the Basque Association of Children of ’37, which sheds more light on the life and career of the talented Garatea.

Born in Sestao, Biscay, in 1924, Garatea was one of nearly 4,000 children aboard the SS Habana which arrived in Southampton on May 23, 1937. Following the bombings of Durango and Guernica, his parents, like many other , had no choice. but to send their children to the safety of foreign shores.

Cyril Cule, the manager of Cambria House, wrote detailed descriptions of the personalities of every child who arrived in Caerleon in his unpublished manuscript ‘The Spanish Civil War: A Personal View’.

“Enrique, on the other hand, is a solidly built 11-year-old boy; tall for his age, bright-eyed and lively. Filled with wholesome mischief, but attentive to his studies and rather intelligent, he seems in the safety of Cambria House to be a typical boy.

“Sometimes he shows traces of nervousness even now, which can be explained by the hardships he has been through and the fact that he rarely hears from his parents. These have been torn apart by war and can be found somewhere in northern Spain.

As the Basque Boys began to captivate local football fans, it became clear that Garatea was special. Under the tutelage of Mr SH Gibbon of Newport, a locally renowned trainer, Garatea, with captain Juan Antonio Hernandez, began to flourish.

Mr. Gibbon, an old-school and stern coach, taught the boys tactics using a pool table with chips to represent the players. He only allowed boys on a football pitch with a ball after five weeks of this chalk-and-talk schooling.

Garatea, who was unaware of the fate of his parents who had been home for more than two years, immediately came to the attention of Newport County and the City of Cardiff.

However, shortly after their incredible victory at Ninian Park, Garatea was delighted to find out that his parents were alive and well in the Basque Country.

The Daily Mirror (Saturday 27 May 1939) reported that the young goalkeeper had “spent a chance to make football his career and returned home”.

“The boy is thirteen-year-old Enrique Garatea. Since he first started playing football at the Basque refugee camp in Caerleon, he has trained so well that several League club leaders were willing to give him work until he reached signing age, but Enrique has given up on gambling now that he knows his parents are safe.

This disconcerting report, that a professional career had been wasted, rather than focusing on Garatea’s joy that his parents were alive, was also the angle of The Western Mail (24 May 1939):

“Because kinship means more to Enrique Garatea than football fame, maybe one of the greatest goalkeepers of all time will be lost in the realms of Soccerdom. I say maybe, because things are not always what they seem and Enrique five years from now may not be fulfilling the promise he revealed as a 13-year-old boy. they so wanted?

“Last week, however, something happened that filled Enrique with overwhelming joy, but shattered his hopes of achieving glory as a footballer. no longer expected to see him again, were alive, and he yearned to return to them, so last Sunday he returned home and left behind dreams of what he could have achieved.

What those parish reports didn’t foresee was that the UK wasn’t the only place the young keeper could thrive, and after returning to the Basque Country, Garatea would go on to have a long footballing career. in Spain, shooting for CD Touring, Calahorra, Huesca, Torrelavega, Tenerife and Cadiz.

The pinnacle of Garatea’s career came when he joined Spanish giants Atlético Madrid in 1952, although he didn’t make an official appearance for Los Colchoneros.

Garatea married Paqui Beltran de Heredia on December 27, 1952 and had two daughters. Shortly after becoming a father, the goalkeeper retired from football. Garatea became a father and worked in a factory in Pasaia, a small town near Donostia-San Sebastian.

Reminiscing about his father from his home in Errenteria, Gipuzkoa, Estibalitz, 67, said: “My memories are the normal memories between a father and his daughter. Getting along and making a family life when he wasn’t working. He was a hardworking person, close, kind, humble and ready to help. He was very fond of climbing mountains and we often went on mountain trips together.

Estibalitz regrets never having seen his father play football, but added that he speaks calmly of his time in Wales and that he was “lucky to return to Wales” on one occasion during a trip organized for the children of the civil war by the Basque government.

At an exhibition match in commemoration of the boys at Caerleon Playgrounds, Garatea was represented by local girls from Caerleon AFC. Garatea’s daughters were “very moved and excited” to see their father’s name on display in the fields where he learned his trade in Caerleon 85 years ago.

Football is universal. It brings people together. It crosses social, historical, political and linguistic barriers. Football is a kind of international language. It gave young Enrique Garatea hope, sanctuary and opportunity in a foreign land, where he had been sent back from the atrocities of a senseless war – something that resonates so strongly with what is happening in Ukraine right now.

Note: Special thanks should be given to Gaizka Garamendi in the Basque Country, whose skills as an archivist are second to none.