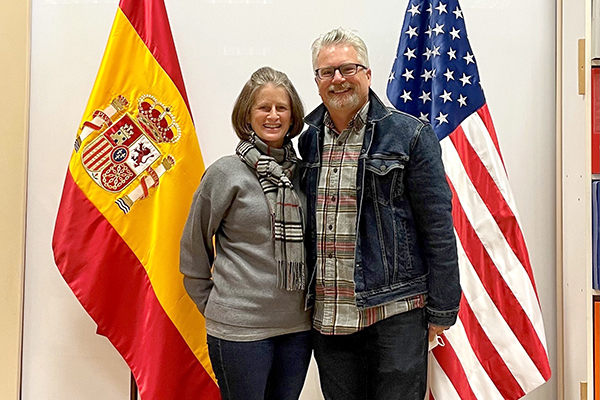 Thanks to a Fulbright US Scholar Award, Michael Ciuchta, associate professor of marketing, entrepreneurship and innovation at the Manning School of Business, found himself in Madrid, Spain, earlier this year, to probe the ecosystem entrepreneurship in the country.

One thing he noticed was that some entrepreneurs would start a business in Spain, then take it to the United States to raise funds before finally returning home. Ciuchta wanted to know more about these “repatriated entrepreneurs”, so he made it the subject of his Fulbright project, “Social Exchange in a Spanish Entrepreneurial Ecosystem”.

“I had been to Spain several times before and always had an affinity for Spanish and Latin American culture, so I knew that if there was ever an opportunity to come back, I would jump on it,” says Ciuchta. , who spent six months in Madrid conducting research and teaching an optional business course at the Universidad Politécnica de Madrid.

“It’s basically an engineering school, but they have a master’s level program which is part of a European Union initiative called European Information Technology Digital where students specialize in areas such as fintech, ‘artificial intelligence, cybersecurity and machine learning,’ he says. “Innovation and technology is what interests me in research and teaching, so I really enjoyed it.”

Beneficiaries of American Fulbright Scholarships are selected by the Department of State and the J. William Fulbright Foreign Scholarship Board. The awards support international research by faculty with exemplary records of academic and professional achievement, service, and leadership potential.

While his Fulbright award and sabbatical were delayed a year by the COVID-19 pandemic, Ciuchta is grateful he was able to complete the program.

“It was incredibly enriching and invigorating, both culturally and intellectually,” says Ciuchta, who recently sat down to talk about the research, which is still in its early stages, and his Fulbright experience as a whole.

Q: How did you land on your research topic?

A: When I submitted my proposal, I wanted to study Madrid’s entrepreneurial ecosystem, which is quite a broad topic. I really didn’t know what I didn’t know. Once there and started talking to potential collaboration partners, I developed a more refined idea of ​​studying returning entrepreneurs. They are people who start a business in Spain that is successful but needs additional funding. So they moved him to the United States, maybe to Silicon Valley, before finally returning to Spain. I wanted to know why these people were returning to Spain and what kind of obstacles they faced. How did they build their social and human capital during their stay abroad? What new challenges did they face on their return? It could be really interesting to explore this question further. I probably need to work with some faculty members there, and some of them have expressed interest and said it’s a tough subject they’d like to explore further.

Q: How does the Spanish entrepreneurial ecosystem compare to ours in the US?

A: It’s similar but different. In the United States, you have venture capital operations across the country. Granted, it’s concentrated in California, New York, and Boston, but every state has venture capitalists. While in Spain, it is clearly concentrated in Madrid and Barcelona. It’s just a much smaller country. The United States also has an extensive network of angel investors who were former entrepreneurs or professionals themselves. They have angel investors in Spain, but they are not at that level. Spain also does not have the large manufacturing base of a country like Germany, so Spain is really interested in digital technologies, software and service-oriented companies. Many of their success stories come from these types of industries. As a member of the European Union, they also have to balance EU-wide initiatives with country-specific initiatives, which is very different from what we would see here in the United States.

Q: As part of your Fulbright, you also taught a class. What was it and how was the experience?

A: Initially, I had planned to take the shell of my innovation management course that I teach at the bachelor’s level at UML and adapt it to the master’s level, with a more European context. But I wanted to use my sabbatical as an opportunity to rethink my interests and investigate issues that I don’t necessarily address in the courses I teach. So I developed a course called Technology, Organizations and Society. The first part focused on human interactions with technology at the individual level. Then I moved up a level to look at more organizational interactions with technology, which basically covered a lot of what I teach in my UML course. And the last piece was more on a societal level: I looked at the ethical and moral implications and issues around emerging technologies – which I’ve now incorporated into my Managing Innovation course here.

Of the 20 students in the class, half were from Spain and the others from Poland, Germany, Romania, Iceland, France and the Netherlands. I taught the class in English, which wasn’t too much of a problem. However, I decided to change the reading load once a student pointed out to me that English was not their first language.

Q: What else have you been able to accomplish during your stay in Spain?

A: I attended a fantastic three-day conference called Crossing the Strait in Cordoba for Fulbright Scholars from Spain and Morocco. And I was able to network with academics from the Instituto de Empresa, a well-known Spanish business school. They invited me to some of their brown bag sessions where the professors presented papers.

I also took the opportunity to work on existing research projects. I had a research paper titled “Transactive Memory Systems, Temporary Teams, and Conflict: Innovativeness during a Hackathon” that was published in the Management log. The lead author is Jay O’Toole of Old Dominion University. We were interested in learning some of the team dynamics at a hackathon called the Global Game Jam, where teams have the weekend to come up with a prototype of a game. I also worked on an article theory on entrepreneurial financial decision-making and a book chapter on improvisation and entrepreneurship with two doctoral students from the Manning School. students.

Q: You have been involved in UML’s Global Entrepreneurship Exchange (GE2) program, traveling with students in India. Would you like to bring students to Spain?

A: I am interested in potential study abroad opportunities in Spain. We have the infrastructure in place around GE2, and UMass Lowell offers quite extensive study abroad programs in Spain, some of which are through Honors College. I would like to increase Manning School’s footprint in Spain, if possible. Maybe it’s about bringing students to Spain or bringing Spanish students here. Or maybe some type of faculty exchange. There is also a big entrepreneurship and innovation conference in Madrid every summer called the South Summit. I met one of the organizers, and they told me that students come all the time to learn more and volunteer. I will explore the possibility of bringing in UML students. I would welcome any chance to return to Spain.