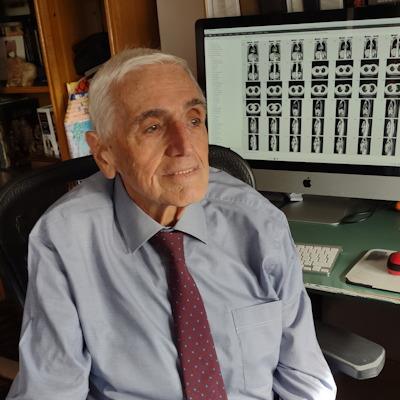 “I decided, when I retired, SSD — shave, shower, get dressed — then go out, go do something,” he said. AuntMinnieEurope.com in an interview.

“Shave, shower, get dressed – then get out.” This philosophy has served Pedrosa well.

Many who cling to the opinions of the famous professor emeritus and former president of the Spanish Society of Medical Radiology (SERAM) are grateful that he still takes this approach.

Pedrosa, a veteran of over 600 radiology conferences and author/editor of landmark textbooks, actually “retired” in 2002 but continues to thrive and retain his popularity and esteem. He was still working when we met him earlier in January via Zoom: preparing a special conference for his students (“The silhouette sign revisited”) and a course on the mediastinum for the SERAM website.

Thoughts on the Pandemic and AI

He still has a lot to say on key professional issues, such as how training might change in light of the COVID-19 pandemic and where new technologies might lead, and he’s very active online. The pandemic has taken a desperately heavy toll on Spain, especially at the start of 2020.

“COVID was such an explosion, it was terrible, there were a lot of deaths in the first months in Spain,” he said, adding that radiologists performed well under the circumstances, responding to the needs hospitals, as they were sent to care for first-wave emergency department patients.

Pedrosa wrote an editorial for the July/August 2020 issue of Radiology, titled “¿Estamos preparados? (Are we ready?).” In his editorial, he defends the “necessity” of clinical training prior to radiological training. He also weighed in on concerns that radiologists who hadn’t read chest X-rays for years might struggle with the complexity of interpreting early lesions.

“The difference between cases with pneumonia and without pneumonia is quite big in Covid, but you need someone who can tell you, ‘Yes, there is pneumonia here’, but it’s not easy”, did he declare. AuntminnieEurope.com. “Ground glass lesions are very difficult to see on a chest X-ray, sometimes you don’t see at all. I don’t think continuing education is well established and organized in Spain, it’s a failure.”

Hence its desire to ensure that radiologists regularly renew their skills. With the growing threat of COVID-19, Pedrosa was in Asturias, his northern region of birth, with his wife for six months from March to October 2020. But he kept in touch with other radiologists. He gave an online chest course, “15 hours with Pedrosa” at the Sociedad Veracruzana de Radiología (Mexico), and in September 2021 he gave a lecture on pneumonias at the annual meeting of the Radiological Society of Venezuela.

As a self-proclaimed optimist who has witnessed significant changes over the years in his profession, Pedrosa is hopeful about the future of radiology.

He is convinced that artificial intelligence (AI) will “enhance the role of radiologists”, although he modestly admits that it is “far beyond my ability to understand and learn”.

Pedrosa was a leading figure in the 1960s in establishing national training for radiologists in Spain at a time when ignorance of important issues such as radiation protection was lacking. He was a member of the education commission responsible for the implementation of the MIR program (1963-1970). This followed his return from the United States, a period of “discovery” for him, which included a residency in diagnostic radiology at Jefferson Medical College in Philadelphia.

Young Cesar Pedrosa as a trainee in 1956.

“I went to the United States in 1958, almost 20 years before Franco’s death. It was a huge shock – the way of life, the politics – and it opened my mind a little bit”, a- he declared. I came back to Spain, probably in addition to being a radiologist, also being a democrat.”

From 1963, Pedrosa worked in Oviedo, alongside several US-trained colleagues.

“As early as the summer, we had written a manual on a formal training program for interns and residents, like in the United States with a rotational internship and formal training in specialties. We had a national offer in September. From 1965 our system was adopted by the majority of hospitals in Spain and this changed medical training forever,” he said.

He has since said that the MIR system still provides high quality specialist training, “warts and all”, but he observed how he suffered from “inertia”, lack of investment and laxity of accreditation of centers and hospitals “where residents are used as cheap labor.”

In the recent editorial, he said the radiology curriculum should adapt to a new era, not just new technologies, with more interactive learning, especially remote.

Pedrosa has, in a sense, seen it all before, experiencing convulsive developments in the specialty.

“The CT scan was a revolution – the chest was the answer to many problems.” The impact on education and disease diagnosis was “enormous”, he said, noting that in the mid-1970s he convinced a government minister to approve the installation of the one of the most expensive CT scanners at the University Hospital of Madrid, which was cash-strapped and not covered by the social security system. A year later, he met the minister again.

“His mother had a stroke and needed a CT scan,” he recalls. “I showed him our machine and asked him, ‘Do you remember our fight for this machine?’ “Yes, of course,” he replied. “Well,” I said, “none of the other machines offered in the tender are on the market today.”

Then there was the excitement of traveling to London to see the EMI scanner at Northwick Park Hospital and seeing an MRI machine for the first time at the Siemens company in Nuremberg. “He was put up in a wooden shack, they kept him there because of the iron and steel in the buildings and so on, they were a little worried about that.”

He cites two other key developments – with radiotherapy and diagnostics becoming two different medical specialties and the still incomplete shift to university chairs in diagnostics. And he hastens to add two more – the development of SERAM into a “well-known and serious company with scientific objectives in medical training and education” and the welcome development of “free access to information medical”.

As for his own achievements, Pedrosa is particularly proud of the two-volume textbook on diagnostic imaging which he wrote and edited in 1985 – a six-volume second edition appeared in 1991 and a compendium was also published. Among the other privileged moments, let us quote the presentation of the “Antoine Beclere” Medal of the International Society of Radiology.

Pedrosa, who was born in 1932, shortly before the Spanish Civil War, saw his country transform as democracy took hold after the death of dictator General Franco in 1975 – “when he died it was like a great outburst of joy”. he says.

Given that health systems everywhere face enormous pressures, he says the “mechanics” of the Spanish system and the availability of services such as vaccines have held up well.

He plans to celebrate his 90th birthday in February 2022 with family “if the pandemic allows us to find each other”, saying they are “always there when needed”.

One of his four sons, Ivan Pedrosa, followed him into medicine – he is a professor of radiology at the University of Texas – and he has a daughter and six grandchildren.

He has said in the past that passing on knowledge that has cost so much to learn is a “matter of generosity”.

What advice does he have for today’s radiology trainees?

“Medicine requires a lot of common sense (in Spain, they say, the least common of the senses). Use it,” he said. “My first teacher used to tell me, ‘The day you know more about medicine will be the day you finish your training.’ Don’t waste your time.”