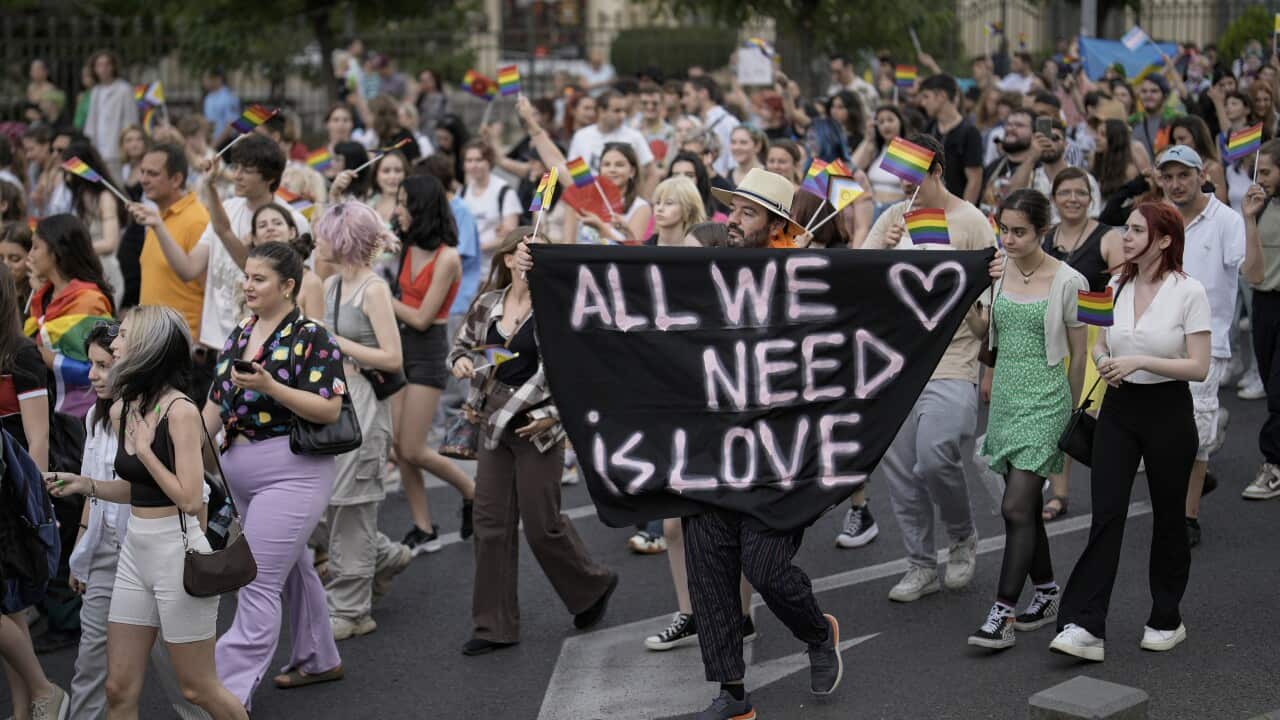 Thousands of people marched in Bucharest, the Romanian capital, on Saturday to demand equal rights for sexual and gender minorities as fears grow over a bill to ban discussion of homosexuality and gender transition in schools.
Among the crowd, Catalin Enescu, 37, came with his wife and two young daughters, both dressed in rainbow-colored dresses.

“It’s the first time I’ve taken part in a march like this, but it’s important to be there because the rights of LGBTQ people are no longer respected,” he said.

Romania decriminalized homosexuality in 2001, but same-sex couples are still not allowed to marry or enter into civil partnerships.
Activists are concerned about a bill, introduced by lawmakers from Romania’s Hungarian minority, to ban teaching materials dealing with homosexuality and gender transition in schools.
Earlier this year, the Senate passed the bill, although it still has to be voted on by the lower house.

The proposal is similar to legislation that came into effect last year in neighboring Hungary.

There was a heavy police presence at the Pride Parade in Bucharest, Romania. Source: AAP / Vadim Ghirda/AP

It came after around 200 people, including several waving Orthodox Christian icons, responded earlier in the day to a call by the far-right Noua Dreapta party for a counter-protest.
“The fact that Pride celebrations are getting bigger while right-wing groups are getting smaller is a positive sign,” said Tor-Hugne Olsen of the International Planned Parenthood Federation.
“But it’s hard to see many proposals in parliament that curtail LGBT rights and other sexual health issues.”
Protester and University of Bucharest professor Oana Baluta said she feared what would happen if the bill were passed in the European country.

“If passed, this bill – which is contrary to European Union standards – would be a serious blow to freedom of expression and the rights of LGBTQ people,” Prof Baluta said.

“It would set a dangerous precedent because we would then risk being banned from the right to discuss abortion and sex education as well,” she said.

Romania has one of the highest rates of teenage pregnancy in Europe. Abortions are legal, but access to them has become increasingly difficult.

‘Visibility, pride and resilience’: Hundreds of thousands march through Madrid

Hundreds of thousands of people waved rainbow flags and danced to techno music during Madrid‘s Pride march on Saturday as the event returned after two years of Covid restrictions.
Protesters in the Spanish capital gathered in the late afternoon behind a large banner with the slogan “visibility, pride and resilience”.

Some attendees carried water guns and sprayed themselves to cool off in the scorching heat. Others went shirtless and danced to Brazilian and techno music.

The protest marched through the streets of Madrid on Saturday under the slogan “Facing Hate: Visibility, Pride and Resilience”. Source: AAP / EMILIO NARANJO/EPA

“It’s become a big party, with floats turned into clubs and multinationals…it’s big business,” he said.

Hundreds of thousands of people turned out for the Pride parade in Madrid, the first time large-scale celebrations have returned since the pandemic. Source: AAP / LUCA PIERGIOVANNI/EPA

Homosexuality was decriminalized in Spain in 1978, three years after the death of dictator Francisco Franco. The country has since legalized marriage and adoption for same-sex couples.

But the national LGBTIQ+ federation, FELGTBI+, said it was important to give “visibility” to the community, decrying growing “hate speech” in a statement ahead of the march.
FELGTBI+ added that such discourse “undermines the foundations of social harmony, jeopardizing the gains made so far”.
The federation has also backed a bill, which will be debated in parliament this summer, which would allow someone to change their name and gender on identity documents at their request from the age of 16.

If passed, the legislation would make Spain one of the few countries to allow gender self-determination.