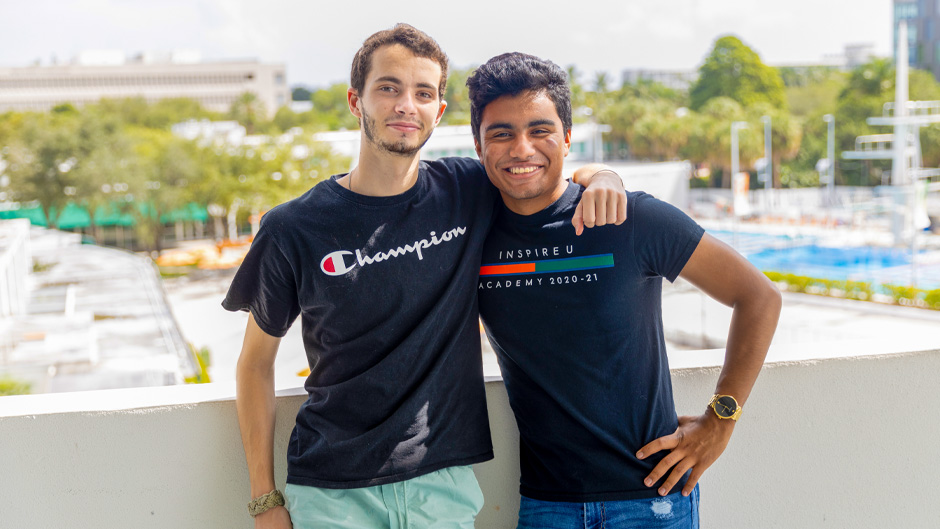 The Mentorship Program, which falls under the School of Education and Human Development, brings together students from the University of Miami and students from Booker T. Washington Senior High School to learn about college life and share their life experiences. .


They both love football. But they are supporting different teams.

Eduardo Lago, a University of Miami student born in Spain, is an avid Real Madrid fan.

But they don’t let their rivalry interfere with their camaraderie.

“We are the best friends in the world,” said Lago. “I think we’ll be friends forever.”

They became friends, in addition to being mentors and mentees, through a program called Inspire U. It mainly brings together first-generation high school students with college students, most of whom are Ronald A. Hammond scholars.

The Hammond Scholarship is awarded to various high school students who have demonstrated academic excellence and intend to continue their education through graduate study. Fellows receive the full tuition fees at the University for their undergraduate studies.

Wendy Morrison Cavendish, Director of Inspire U and professor at the School of Education and Human Development, started the program when she was a resident teacher at Booker T. Washington Senior High School and noticed that the school was looking for ways improve its graduation rate and provide resources for students with college aspirations.

“We wanted the program to be about building social capital,” she said. “A lot of these students can’t imagine themselves on a college campus until they’re actually on campus here at UM.”

Jack Hart, director of the social studies department at Booker T. Washington and liaison officer for Inspire U, has been participating in the program for eight years.

“This program is working,” he said. “Many mentorship programs are funded for a purpose that is not genuine. Inspire U started with the heart and is still a mentoring program that works with the hearts of everyone involved.

Celebrating its 10th year in business, Inspire U has served over 500 high school students. About 90 percent of its graduates go to college.

“This program has done so much for me,” Rivera said. One of the most rewarding experiences, he said, was spending the summer researching civil engineering projects with Lago. Thanks to a university program called JANUS, short for Joint Academic Nurtureship for Underrepresented Students, they were able to work in a lab mixing proteins and concrete to try and create a more environmentally friendly product.

In their free time, Lago and Rivera got closer. They played video games, but also explained how to write an essay for a college application and how to prepare for the SATs. Rivera hopes to apply to college. “I love this campus,” Rivera said.

Inspire U brings together mentors and mentees at the Coral Gables campus several times a year for sessions on how to prepare for ACT and SAT tests, apply to college, get scholarships and financial aid, and write a university application essay. The program also teaches students how to negotiate college life, balance their schedules, develop study habits, and even track their finances.

Over the past year, when racial justice issues have come to the fore following the murder of George Floyd and the Black Lives Matter protests, a virtual session on racial justice has been added to the program.

Dynesha Peterson, the former president of Inspire U, is now a graduate student in kinesiology at the University of Central Florida. She was one of the creators of the racial justice presentation.

“When all of these situations of police brutality and unequal treatment of blacks came to light, I realized that the majority of our members (at Inspire U) resonated with being black or of color,” she said.

“I was like, ‘we have to say something, we have to be a support system for our members and see how they are dealing with the current climate,” “she said.

The session provided a safe space for dialogue among the students, she said. He also asked the students not only what they thought about racial injustice, but also how Inspire U should adapt to the current situation regarding social justice issues.

For Jamie Williams Smith, senior and Hammond scholar at the University, and Valentina Rodriguez, senior Booker T. Washington, Inspire U has been a way to share similar life experiences. They were both raised by single mothers and are first generation college students.

“I see myself in her,” Williams Smith said. “We talk about life issues and I tell him about my life in college. We solve things together. ”