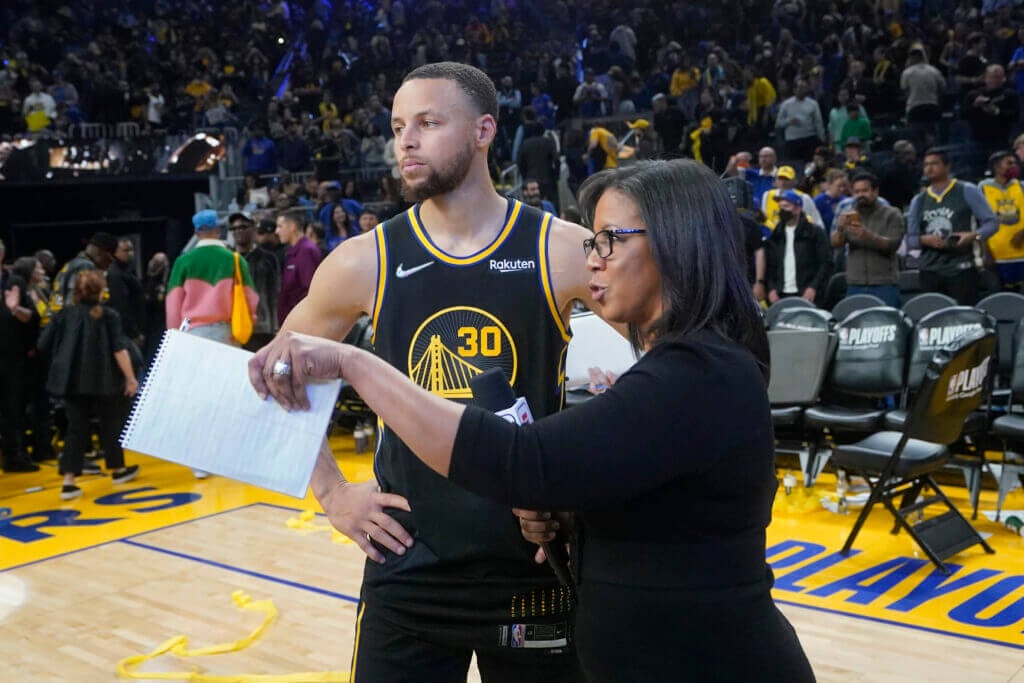 If you’re reading this column, you’re probably familiar with Lisa Salters, given her work over the past 10 seasons on “Monday Night Football.” Although several game-by-game and analyst changes, Salters has been the constant on the air since 2012 on ESPN’s most prominent gaming property.

While Salters has earned accolades for his work on “Monday Night Football,” “Outside The Lines,” and various E-60 projects, basketball is actually his biggest sporting passion. salters played basketball at Penn State University for two seasons, and has been part of NBA coverage on ESPN and ABC since 2005. Her role on NBA television has traditionally ended after the second round of the playoffs, while Doris Burke served as a sideline reporter for coverage by ESPN/ABC of the Conference Finals and NBA Finals.

That changes this year. Salters has the primary mission of being the on-court reporter for the NBA Finals between the Golden State Warriors and the Boston Celtics. The series will air exclusively on ABC, beginning with Game 1 tonight at 9 p.m. ET (all NBA Finals games will air on ABC, ESPN Radio, ESPN Deportes and the ESPN app and Game 1 will include an alternate ESPN2 presentation called “NBA Finals: Celebrating 75.”

Salters was previously on-court reporter for the 2006 NBA Finals, filling in for Michelle Tafoya (who was on maternity leave) for the Heat-Mavericks Finals. She returns to this assignment 16 years later.

“I’d like to think that was the time I took, that I waited patiently backstage behind Doris Burke and now it’s my turn,” Salters said. “That’s the easiest way I can say. The wait wasn’t as excruciating because I was doing Monday Night Football. When you’re assigned to the biggest platform and the biggest stage in the business, you can certainly whine about what you don’t have, but it’s pretty hard to ignore the fact that I can do “Monday Night Football” every year and that I last 10 years. Back in 2005, when I was asked to sit on the sidelines for our NBA coverage, I was ecstatic about it and loved every second of it.

The role comes at a very good time professionally. Salters has just re-signed with ESPN for four years. She’s not contractually assigned to any property – she works on the principle of giving management no reason to make changes – but it would be very surprising not to see her on ‘Monday Night Football’ for years considering of the new stand. Salters said she has never met Troy Aikman and has interacted with Joe Buck in person once or twice through his wife Michelle Buck-Beisner, who works as a reporter at ESPN. Buck and Aikman reached out to Salters during Fox’s move to ESPN to begin the chemistry research process.

“I think over the summer we’ll be spending time together,” Salters said. “These guys are so professional, awesome and cool that they contacted me right away. These two guys got my number and told me how excited they were to be on the Monday Night crew and to work with me, which meant a lot. I have no doubt there will be instant camaraderie and chemistry.

When a company wants to make major changes to its advertising teams, these changes are usually general. So that’s saying something that ESPN has kept Salters in this position thanks to several play-by-play changes (Mike Tirico, Joe Tessitore, Sean McDonough and Buck) and analysts (Jon Gruden, Booger McFarland, Jason Witten, Brian Griese , Louis Riddick and Aikman).

“It didn’t escape me,” Salters said. “I’m extremely grateful and thankful that they didn’t feel the need to make a change. I know sometimes changes are made just for the sake of change. I get it. I feel like I don’t I gave them reasons. Quite the opposite. I gave them reasons to keep me and I like to think that they believe they have the best person in this position. As long as they believe that, I must continue to live this, that’s why I can’t send it by mail.

I consider this to be the most important podcast I’ve done in a long time. The Sports Media Podcast Episode 210 features writer John Woodrow Cox, a corporate reporter for The Washington Post who has focused on the impact of gun violence on children. Cox is also the author of a book on the subject, “Children Under Fire: An American Crisis”. In this podcast, Cox talks about his reporting on child victims of gun violence; what school shootings do to the children who survive them; how to interview children who experience trauma; what solutions might work; should the media show what bullets do to bodies; why the good guys with guns have consistently failed to stop the bad guys with guns intent on murdering school children; and the effect on journalists reporting on gun violence.

You can subscribe to this podcast on Apple Podcasts, Google Play, Stitcher, etc.

Some big Premier League changes on the announcements side: Telemundo Deportes announced on Wednesday that Carlota Vizmanos will be the network’s main host for Premier League coverage, including pre- and post-match “La Liga” shows. First: Extra” and “3er Tiempo.” As for NBC coverage, Peter Drury will replace Arlo White as lead Premier League announcer.

ESPN said the Celtics’ victory over the Heat in Game 7 on Sunday averaged 9.875 million viewers, the most-watched conference finals game on ESPN in four years, according to Nielsen. The series averaged 6.978 million viewers, a 40% increase from last year’s Eastern Conference Finals. You can thank a great game – and seven games – as well as out-of-home viewing.

Episode 211 of the Sports Media podcast features two guests. The first is Chad Finn, the sports media writer and general columnist for the Boston Globe. He is followed by Louise Radnofsky, sports journalist at the Wall Street Journal. His article, “Testing Positive in Zero-Covid China,” spoke of being isolated as part of aggressive policies in China during the Olympics. In this podcast, Finn and Deitsch discuss how we see the popularity of a Celtics-Warriors NBA Finals; what historical trends mean for this series; whether ESPN has found the right person for its NBA studio programming; Greg Olsen is officially named the NFL’s No. 1 analyst by Fox; NESN’s new direct-to-consumer product for the Red Sox and Bruins and more. Radnofsky discussed his post about the positive tests 19 hours after arriving in Beijing on Feb. 4 to cover figure skating at the 2022 Olympics; being part of Chinese policies that call for centralized isolation; how she and the Journal navigated her positive test; his reporting on the detention of Britney Griner in Russia; the public campaign to defend Griner; the challenge of reporting Griner’s situation; the future of American gymnastics; and the earning potential of college gymnasts.

You can subscribe to this podcast on Apple Podcasts, Google Play, Stitcher, etc.

F1’s viewership continues to grow. ESPN said its coverage of races between ESPN’s networks and ABC averaged 1.4 million viewers this year, well up from the average of 948,000 in the first seven races of the 2021 season and up 45% from the 2021 all-season average of 949,000.