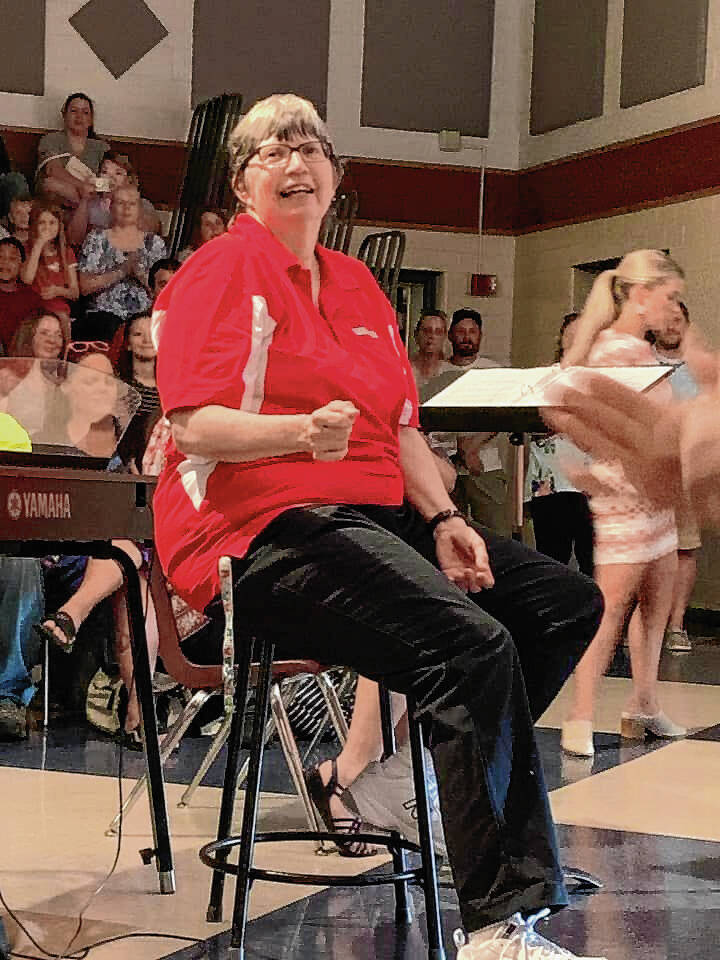 Northwood Elementary School will see the departure of its music teacher, Judy Lamb, who is retiring after a 42-year career, including 26 years spent at the school.

While Lamb had a passion for music as a child, it translated into a desire to teach when she saw how great a good band could work together, she said.

“I enjoyed the teamwork, part of being a great ensemble and how each part worked together to make this amazing music,” Lamb said. “I started playing the piano at the age of five, then I learned the guitar, and when I started playing in a band, I was a saxophonist and a clarinetist. When I was in the band, it was the look in the eyes of the students when we did something good, that joy and excitement. Music brings us together with teamwork. I wanted to make sure I could do it with others. Instead of playing with myself, I wanted to teach teamwork and the joy of togetherness with other students.

“You’re trying to create this wonderful sound, whether it’s from young or older vocals and instruments,” Lamb said. “At the elementary level, we are just beginning to explore what sounds are when they intertwine and how joyful it can be to experience things for the first time. The look on their faces when it works is such a delight.

When teaching elementary school students, a lot of the work is not perfecting the product, but creating joy in playing, she said.

“In elementary school, it’s all about learning and I always tell them ‘as long as you try, you will succeed’. They keep trying and when you see that smile, and the smile on their parents’ faces when they see them in a program, that’s what makes my job so special,” Lamb said.

Lamb will continue to visit music classrooms and teach occasionally, but she will use her retirement as a way to do things she didn’t have time for before, she said.

“It’s hard to recognize there’s a next step,” Lamb said. “I look forward to doing things that I haven’t had the chance to do as a teacher. I will have time to travel, I will help rescue animals. I will continue to teach music on the side. I will go to the classrooms, I will play and I will teach with them, I will not leave completely. It won’t necessarily be in Northwood, but in other places.

Judi Carlstrand’s title as a French teacher at Franklin Community High School barely scratches the surface of her life experience.

Primarily a Spanish teacher until six years ago, Carlstrand’s life and career have taken her to Panama, where she has taught at a Florida State University satellite campus, and to Madrid, Spain, where she lived for two years.

It was through her travels that she discovered a passion for language and teaching, said Carlstrand.

“I was invited to go to Mexico for the summer and I fell in love with everything about their culture and I learned to speak Spanish fluently and I couldn’t leave,” said- she declared. “Now my passion is to spread culture. I like people and I want to communicate, it comes naturally to me. Once I started teaching, I was hooked.

“My pedagogy is discovery. I speak (approximately) 95% of the language of the first day and I try to make the students understand. They take small steps to be proud of themselves, and then they get it,” Carlstrand said. “I want them to be excited about what they’re doing. Life is a highway and we continue to travel it but we are on an adventure here. We learn from each other.

Carlstrand has taken many trips to Europe with students and said these trips helped increase their love of the languages ​​they were learning.

Although she continues to teach at IUPUI, Carlstrand will end her 28-year career at Franklin High School with a trip with students to France this summer. Madison Prine, a traveling sophomore, has had Carlstrand as her teacher since eighth grade, Prine said.

“It’s definitely bittersweet,” she said. “I met her in eighth grade. She’s a fantastic and amazing person, stopping me from saying something I had no idea what she was saying so I could understand what she’s saying most of the time.