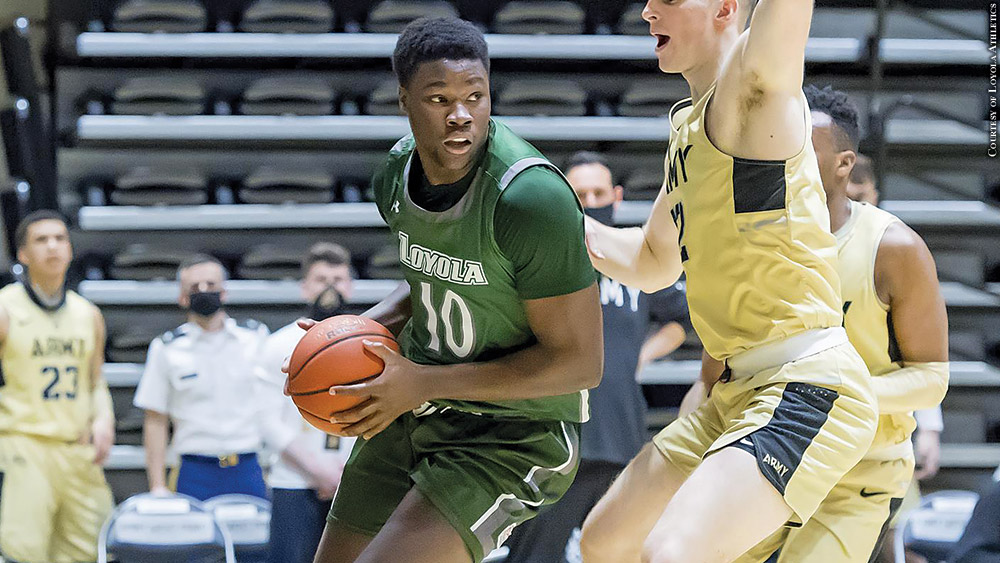 Loyola men’s basketball senior Golden Dike recently spoke with PressBox about his childhood playing basketball in Spain, his advice for young players at home and more. The 6-foot-10, 248-pound forward averaged 5.5 points and 6.1 rebounds per game for the Greyhounds last year. Dike is originally from Malaga, Spain.

Press box: How did you get interested in basketball?

Golden dyke: At first I was a big football fan because I’m from Spain, so I played football there in Spain. When I was 7 or 8, my family told me I was tall and fat, so they told me to try playing basketball. At first it was a little hard. I didn’t know how to act, but I noticed that I was taller than the others, so I liked it just because of that. I started learning quickly, getting to know more people, getting to know my friends, so I just started playing.

DB: When did you hit a growth spurt?

DB: Have you passed the football stadium at some point?

GD: I never reached that point. I stopped playing soccer when I had to choose between soccer and basketball because basketball took a lot of time and then I had to study too. … I’m going to play in my spare time now in the offseason sometimes. I’m not very good because I stopped playing when I was 10, 11, but I think I could have played at an intermediate level if I had continued.

DB: Who was the biggest influence on your basketball game at home?

GD: It would probably be my family and my first coaches. I remember two coaches, [Pipi Senperos and Juan Jesus, both of whom] would play with me. We had to practice for two hours. They would be there an hour before then an hour after just working on my technique, shooting, dribbling, passing and footwork. They were my biggest influences there. I remember spending three, four hours practicing my footwork and skills and stuff. At that time, people were beginning to know basketball or their family members like basketball, but I was the first in my family to play basketball. I didn’t even know much about it, so I had to build myself up and they helped me.

DB: When did you level up where you started getting recruited? How did Loyola come into the picture?

GD: I [had] two major steps. The first was being recruited by the national under-12 team. It was very important for me to represent your country. And then I played a huge tournament in which all the clubs in Spain… are going to play in large numbers. It would be my debut, but I think the big step was when I went to Real Madrid from my hometown club, Unicaja de Malaga, to Real Madrid. Everyone knows that Real Madrid is the biggest club in Europe in terms of football and basketball. So I went to play there, I spent three years there. My game has really expanded, gone to all these big tournaments, from under-aged in Europe to EuroLeague under-aged. I’ve been there many times. Played the national championship in Spain, participated in many different tournaments.

… Loyola came on the scene in 2019, when I was 17, almost 18. [Former Loyola assistant Ivo Simović], he’s at UCLA right now. He recruited Santi Aldama, who is an NBA player from the Memphis Grizzlies. He recruited him the year before, and I think they needed some big guys, so he called me, talked to me. [Head coach Tavaras Hardy] did a great job coming to Madrid. I think that’s why I came here. I had a lot of bigger offers, but the fact that the staff came from Baltimore to Madrid to see me, talk to me, explain everything to me. Coach Ivo was there. Santi was there. I had people who spoke Spanish here. It was a little felt [like I’d] being at home was the main thing [as to] why I chose Loyola.

DB: What is your best memory so far at Loyola?

GD: I would say that my best Loyola memory would be my very first [home] match against Fairfield [in 2019-20]. I think I played pretty well, I [18] points, [eight] bounces. … I would say Fairfield and play Marquette – play in an NBA arena. It was my first match, 13,000 people, a huge school, a school with a history. Dwyane Wade went there. I think those are the two main good memories. But for me, it’s more the relentlessness that I built up with this school. You will never see Real Madrid lose, ever. We used to win every time and play hard and be the best guys there. Come here for a mid major, you ain’t used to winning [as] a lot. You have to grind every time, work for it every time, be relentless. I think that would be my biggest lesson from Loyola. This year play hard all the time, play harder than before, work on my game and regain my confidence to be the best guy and be the guy I was when I played for Real Madrid.

GD: That’s how everything is connected. People here are so nice. Coaches will work for you 24/7. They go [see] that I am more than an athlete. They will push you to do internships, to have relationships, to make friends, to be good in class. They will actually push you to be a good person. I think that’s great. Coach Hardy does a great job with that, so do the assistant coaches. And also, the whole school is involved in our success. The president, every time he sees me, he says hello, asks me how I’m doing, how I’m doing, pushes me to be taller — [athletic director Donna Woodruff] as well.

DB: Who is your best friend in the team and what is the story that highlights your friendship?

GD: [Roommate Daraun Gray] is my best friend here. I feel like he’s been my friend for years and years and years. I have a room with him. It’s crazy. His family always treats me well, takes care of me. If I need something, they’ll buy it for me. At Thanksgiving, they’ll take me home. His mother, father and grandmother shoot for us. They will spend time with us, chat with me, give me advice. It’s like my host family. He’s the funniest guy on the team. I like being with him, his sister too. It’s a big family. It’s important when you go to another country to have these kind of people to support you and help you because at the end of the day, I’m here all alone. … The fact that they help me out and take me to the airport when I need it, pick me up, bring me back my backpack when I leave in the summer, I have no words to thank them .

DB: What advice would you give to young Spanish players?

GD: I’m not going to say just come here and go to Loyola or Colgate or whatever. I would say if you really want to have a great experience and prepare for it, being here is tough. You are [away from] your family the whole working year. I’m from Spain so the weather there is very different. … If you’re up for it, come here, grind. You will graduate in the United States, which is huge. If you’re not a basketball player after that, you’ll graduate here, you’ll learn the language, the culture. Then you can have a good life, a good job and start your family. If you are going to pursue your basketball dreams, in Europe they are not waiting for you. You must be ready. If you are not ready, you are eliminated. Here they will work for you, work with you, give you that time.

Coach Hardy and the staff do a great job with the freshmen. They will try to explain to them everything about attack, everything about defense, the culture, their values. It is enormous. They don’t do that in Europe. So I would say if you’re up for it and want it, come here. Otherwise… it’s hard — not being at home, not being with your friends. When the weekend comes around and your friends are doing something, you’re here and you’re not there. Sure, you have friends here, but that’s not the same. I’m the type of guy who when I want something I’ll go for it, which is why I think it worked for me, but it might not work for others. I don’t want to sell [that] You should come here. No, if you’re tough and you’re up for it, come here. Otherwise, stay home. This is the message.