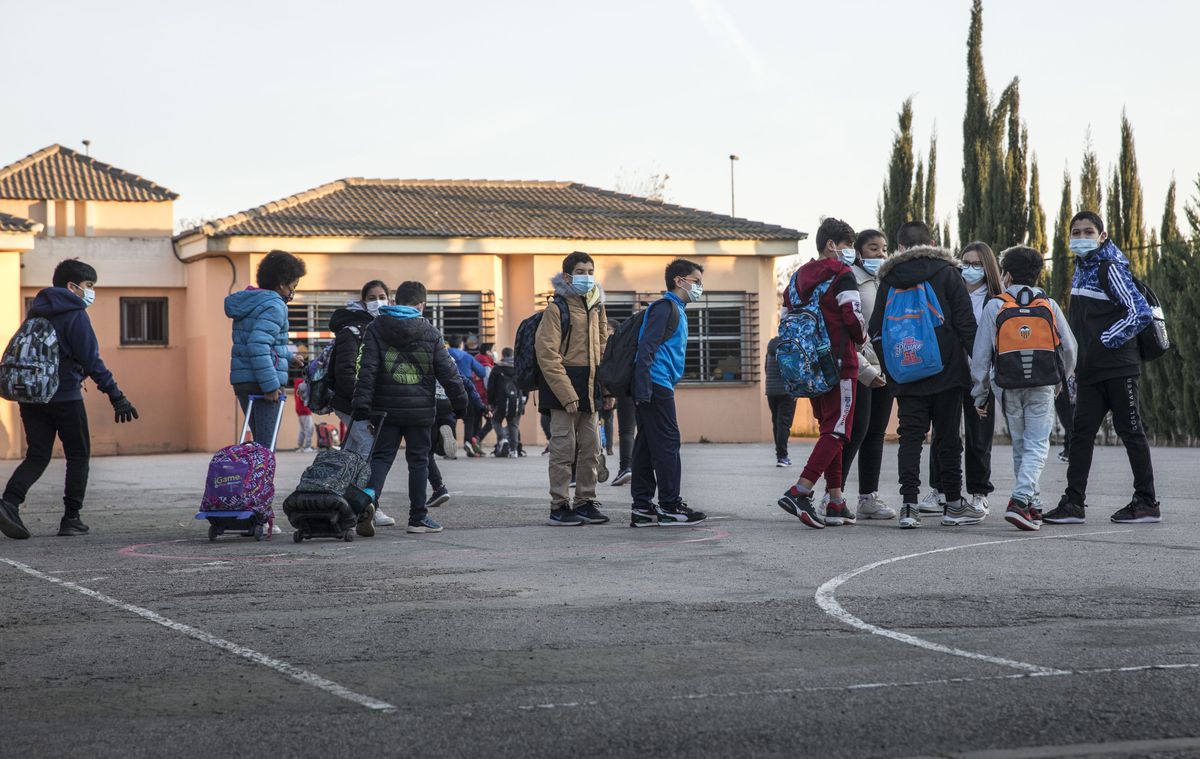 Spanish schools will end the current semester this week in the most complicated situation since reopening in September 2020. This month broke all records in terms of coronavirus outbreaks among students, and they mainly focused on younger children rather than being split between different ages. Thanks to the widespread vaccination of adolescents in Spain, high schools are more resistant to this sixth wave of the pandemic. Immunization of children aged 5 to 12 is only just beginning in the country.

Given the situation, many parents decided not to send their children to school, starting their vacations early in an effort to avoid infections or locking down an entire cluster of bubbles – which would mean skipping the holidays. Christmas in isolation at home. In some schools, the principals themselves have called on parents to keep their children at home for the last days of the semester.

The largest federation of student family associations, Ceapa, warned that such a decision would have adverse consequences for children from an educational point of view, as well as problems for parents in terms of balance. between work responsibilities and childcare. The main teachers’ union, CCOO, has called for the reintroduction of measures that were in place during the previous school year – namely smaller class sizes and additional teaching staff – to be reintroduced.

The necessary approach, according to epidemiologist and pediatrician Quique Bassat, consists in “scrupulously following the rules and prevention measures which have worked very well in schools and which have been relaxed in recent months”. Indeed, the vaccination of children under 12 will take at least two months to have a significant impact in schools. The cumulative incidence among those under 11 remains the highest of all age groups, with 777 cases per 100,000 inhabitants over 14 days, against a national average of 609.

Until this month, the record number of coronavirus outbreaks in schools was seen in the first week of February, when there were 413 with a total of 2,570 associated cases. These were mainly in the secondary education system, according to data from the Ministry of Health. During the second week of December, there were 463 outbreaks with 2,968 cases, and this time the vast majority were detected in elementary schools.

Given the surge in cases and the semester nearly over, many families have decided not to bring their children.

Fran Lires, President of the Association of Elementary School Directors of Galicia

The number of outbreaks fell to 334 on December 17, with 1,979 associated cases, but the number of isolated students continued to rise. Eight of Spain’s regions said at the end of the week they had more than 1% of their students confined, while seven days before, only six regions had done so.

The data at the start of this week is even worse. Catalonia, which publishes daily information on the impact of Covid-19, said the number of students in quarantine rose from 25,050 a week ago to 60,125 on Monday, and that quarantines affected 4% of students.

The main indicator used so far to get an idea of â€‹â€‹the effect of the pandemic in schools, that of confined classrooms, is no longer of much use. Indeed, some Spanish regions have changed the way they count these locked groups.

In Catalonia, for example, where schools are going through a particularly difficult period, the number of classes in quarantine is very low (0.33%). But that’s because a group isn’t considered confined – even though all students isolate themselves at home – when their teacher is still in school, which staff have been able to do so far if they do. is vaccinated and if it is negative.

â€œThese weeks are the most complicated so far,â€ explains Fran Lires, president of the Association of Elementary School Directors of Galicia. “Considering the peak of cases and the semester almost over, many families have decided not to bring [their children]. In and around my school the figure was around 40% [absences]. “

Parents’ attitudes vary greatly from region to region and from school to school. The president of the directors of elementary schools of Aragon, Enrique Civera, says that the week started normally in his school â€œThe children came as always and the same ones used the canteen,â€ he explains.

In Valencia, the president of the association of school directors, Joaquina Barba, also says that absenteeism before Christmas was negligible. â€œThere were cases, but nothing excessive, there was no rush,â€ she explains.

We thought: “What if he’s infected for three days at school and we can’t go to his grandparents”

Sonia, mother of a child in primary school

At the school of Jorge Delgao, president of elementary school directors in Andalusia, around 15% of the pupils were absent on Monday, but for various reasons. â€œA number of things came together,â€ he explains. â€œThere are children who isolate themselves because they have tested positive or are close contacts. Others were vaccinated and the parents preferred to leave them at home after a minor reaction. And then a small percentage didn’t come because they said, “Since there are two or three days left, we’re not going to take the risk.” “

In Madrid, meanwhile, a feeling of “chaos” in the health system, according to Isabel GalvÃ­n, CCOO’s education manager in Madrid, has prompted many families to keep their children at home. This feeling is caused by an increase in cases and difficulty in contacting the healthcare system to report symptoms.

This is the case of Sonia, mother of a child in primary school. â€œWe thought, ‘What if he’s infected for three days at school and we can’t go to his grandparents, who live in another town, for Christmas? It’s a shame, but we can keep him at home, because we can work from home and we have someone looking after him, so that’s what we did. With all the infections that occur, it would be easy for the child to catch it. Or have someone in his class do it. If that happened, we would all have to self-isolate for 10 days. “

In the case of the Palacio ValdÃ©s public primary school in Madrid, the director sent a letter to the families, explains Carlos GarcÃ­a, president of the parents’ association. In view of the increase in cases, the letter reads: “We ask you to consider the convenience or not of bringing the children to school”.