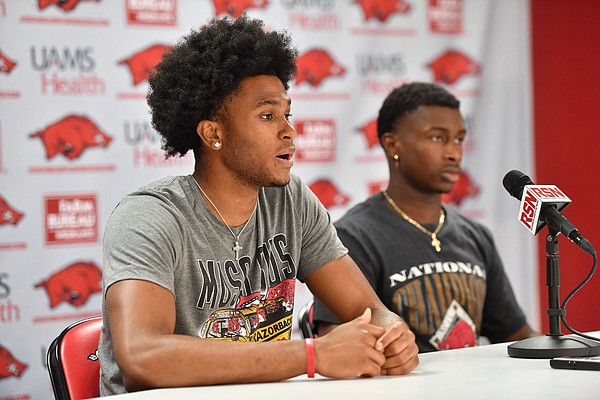 FAYETTEVILLE — The University of Arkansas men’s basketball team is one of six SEC teams playing overseas this summer.

The Razorbacks will complete an 11-day trip to Spain and Italy from August 6-16 and play four exhibition games.

NCAA rules also allow teams to have 10 practices on campus before leaving the country.

This will be the third time Arkansas coach Eric Musselman has accompanied a team on a summer tour overseas. He was an assistant coach with Arizona State in 2013 when the Sun Devils played in China and head coach of Nevada when the Wolf Pack played in Costa Rica in 2017.

“The 10 workouts leading up to the trip will really benefit us,” Musselman said. “But the games will also be very beneficial.

“It’s good for everyone to have some chemistry on the pitch. It’s really good for coaches to be able to play different rotations and look at different combinations. Both offensively and defensively.

“It forces you to have a lot more going on knowing schematically that you have four games to come. So I think that’s really good for a lot of different reasons.”

Having extra practices and games as well as traveling overseas together are especially beneficial for an Arkansas team that has 11 newcomers.

There are six freshmen joining the team and five transfers.

All players are now on campus training. Black joined the Razorbacks on Thursday after helping Team USA win gold at the FIBA ​​Americas Under-18 Championship in Tijuana, Mexico.

“I think it’s going to be fun knowing that we’re going to play basketball overseas and build chemistry,” Davis said. “I think it will help the team a lot off the pitch to know that we are going to be together for quite a long time away from the facilities here.

“I think it will help us bond more, on and off the pitch.”

The Razorbacks will play their first three exhibition games in Spain, including Valencia on August 9 and Madrid on August 11-12. The fourth game will take place in Lake Como, Italy on August 14.

Arkansas previously toured overseas in the summers of 2012 (Italy) and 2016 (Spain) when Mike Anderson was the Razorbacks coach.

Anderson is taking his team from St. John’s on tour in the Dominican Republic this summer.

Among the Razorbacks’ non-conference opponents going on summer tour, according to the list compiled by Goodman, are Baylor (Canada July 3-10) and Oklahoma (Bahamas July 30-August 6). Ohio State, a possible opponent of Arkansas at the Maui Invitational, will tour the Bahamas from August 4-9.

The board said its Wichita State team was scheduled to go on an overseas tour last summer, but was canceled due to the coronavirus pandemic.

“I would say it will help us bond a lot,” Council said of the Razorbacks tour. “But I honestly feel like we’re already close.”

Musselman said the players have already been together three times at his house. They also have activities planned outside of basketball, like going boxing today.

“We’re trying to do a lot of things on the bonding side,” Musselman said. “Unique non-basketball activities now that we’re all together.

“But definitely getting on a plane, traveling that far [to Europe]knowing that basketball once on the trip will be very, very limited [helps bring the team closer]. Practice time will be limited, or non-existent. There will be games.

“I think this team has become very close in a very short time, especially considering that there are only two comebacks.

“I think the 11 new guys – even though Anthony has just arrived here – have done a great job of bonding on their own, away from the coaching staff.”

Leaving Fayetteville on August 6 and arriving in Valencia, Spain on August 7

MATCH 1 on August 9 in Valencia

Bus to Madrid, Spain on August 10

MATCH 2 on August 11 in Madrid

MATCH 3 on August 12 in Madrid

Fly to Milan, Italy on August 13

Return to Fayetteville on August 16

Arkansas men’s basketball coach Eric Musselman spoke to the media on Friday about the team’s European tour in August, among other topics. Musselman wore an Arkansas baseball jersey to support the baseball team and plans to attend today’s College World Series game against Stanford in Omaha, Neb. (NWA Democrat-Gazette/Andy Shupe)