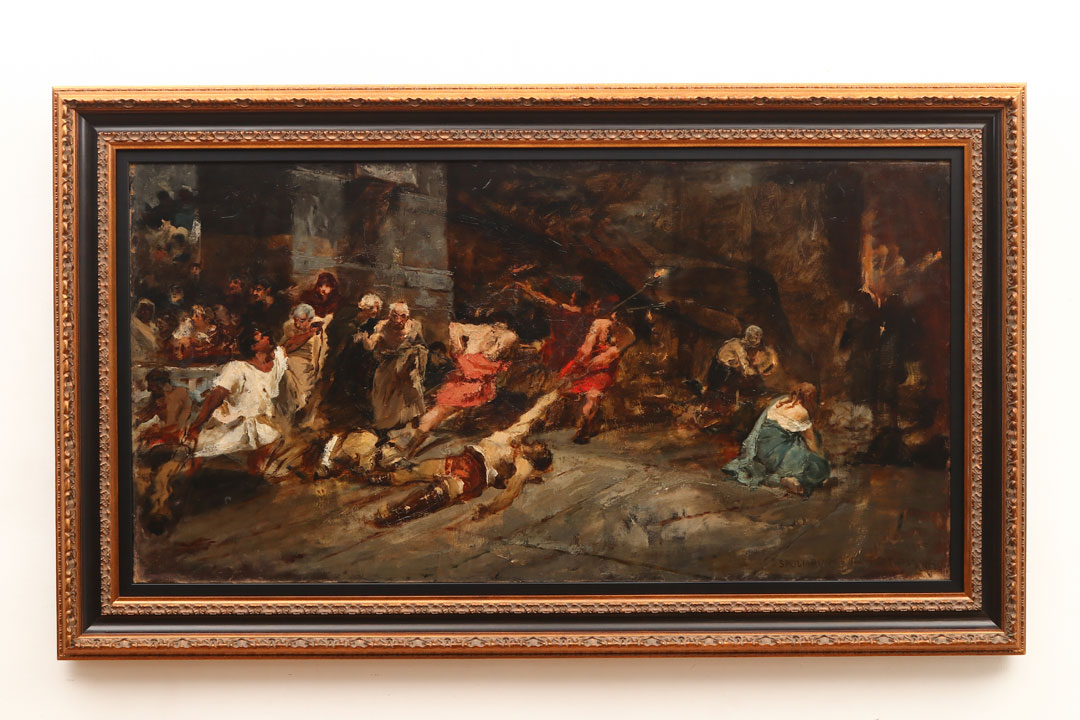 Sstumbled upon his bloodied loincloth, a dead gladiator is dragged by the right arm by a bloodied orderly into the spoliarium (slaughterhouse) of the Roman Colosseum. The gladiator had lost in the spectator sport where two fighters fought”sinusoidal mission(until death) for the entertainment of the Emperor and the obsequious, mocking and bloodthirsty public who had jostled and bribed for bleacher seats in the four-story Colosseum which had a capacity of 50,000 people.

Dead or nearly dead, the losing gladiator was officially to die at the thumbs down decision”back of the font— of the Emperor. And so, the loser lost his life and all his possessions. Two Colosseum attendants are seen taking out the armor, weapons and clothing of the vanquished – all to be handed over to the victorious Gladiator. “Please don’t take it all,” the man in the white tunic seems to be saying to those carrying the spoils of the fight. He was the coach-coach, the lanista of the fallen warrior, who would then need to set up the logistics for his next gladiator trainee. On the right is a woman in blue, mourning the loss of her loved one, the fallen warrior. Behind her is an old man, seemingly searching for scraps of food or abandoned things, or possibly suffering from dementia, looking for his dead son. In the gallery box on the left side of the spoliariuma crowd with various expressions of sadistic voyeurism observes the events.

It’s like stepping into the spoliarium of 4e-6e century AD, when dramatic gladiatorial contests ingrained in the minds of the people the awesome power of the Roman Empire and the absolute power of the emperors over life and human rights. Our take on how it was in Roman times comes from the great Filipino artist Juan Luna. Spoliariumwhich I have just described.

Painted for eight months in 1884, it won first prize at the Exposición Nacional de Bellas Artes in Madrid, Spain in 1886. Juan Luna, then 27 years old, was with the group of young Filipino intelligentsia who studied and lived in Spain, soaking up the atmosphere of European liberal thought. José Protasio Rizal, then 24, an intellectual writer and polymath, was in Madrid with Juan Luna and the group of young enlightened Filipino nationalists active in the late Spanish colonial period of the Philippines.

“At a gathering of Filipino expats in Madrid, José Rizal enthusiastically toasted the triumphs of his two compatriots, the other being Félix Hidalgo who won a silver medal, calling it “new proof of racial equality “” (Guerrero, Leon (1974 ). The First Filipino: A Biography of José Rizal (PDF) (5e ed.). Manila: National Historical Commission. p. 112).

In his congratulatory speech, Rizal said, “Luna Spoliarium with its bloody carcasses of slave gladiators dragged from the arena where they had entertained their Roman oppressors with their lives… stripped to satisfy the obscene scorn of their Roman persecutors, their honor embodied the essence of our social, moral and political life: humanity under severe trial, unredeemed humanity, reason and idealism in open struggle against prejudice, fanaticism and injustice” (Ibid. p. 114).

“Rizal was inspired to etch his own mark to bring glory to his country by writing his ‘Spoliarium‘ since the beginning of this year 1884 ‘he had toyed with the idea of ​​a book’ because he saw and described the painting as ‘the tumult of the crowd, the cries of the slaves, the metallic clanking of the armor of the dead, the sobs of orphans, whispered prayers…’. Rizal’s book would be called Noli Me Tangere“the Latin echo of Spoliarium‘” (Ibid., pp. 119-120, 122).

Graciano Lopez-Jaena, contemporary and co-nationalist of Juan Luna and José Rizal declared: “For me, if there is something great, something sublime, in the Spoliarium, is that behind the canvas, behind the painted characters… floats the living image of the Filipino people sighing their misfortune. Because… the Philippines is nothing more than a real Spoliarium with all its horrors” (quoted by critic Butch Dalisay, philstar.com, July 17, 2006).

The gloomy chiaroscuro of dark shadows shocked by the impressionistic touches of light on the painting’s main figures elicits a dark mood of loss and helplessness, perhaps even instigating a hidden guilt of uncertain complicity in the strong message of oppression in society. In the shadows are various blurred faces, not even looking at the dead gladiator, thinking their own thoughts. Some art critics might say it was Juan Luna’s demo of the end of century (French: “fin de siècle”) artistic climate of sophistication, escapism, extreme aestheticism, world-weariness and fashionable despair. But no.

The discreet but noticeable red, white and blue (the colors of the Philippine flag) triangulated in the painting of the Spoliarium clearly call for patriotism and the defense of peoples’ freedoms. Possibly because Juan Luna was identified with José Rizal’s group of expatriate propagandists in Madrid, it was mothballed after a three-year exhibition at the Museo del Arte Moderno in Barcelona where it was then stored until that the museum is burned and looted during Spain. Civil war in 1937. The badly damaged Spoliarium remained in Spain for another 20 years until Generalissimo Francisco Franco returned the partially restored painting to the Philippines in January 1958.

The Spoliarium was unveiled and displayed in the Hall of Flags of the Ministry of Foreign Affairs (the current Ministry of Justice building on Padre Faura St. in Manila) in December 1962. One might wonder why it was not trumpeted much , but perhaps the Vietnam War that started in 1961 and raged until 1975 occupied much of the mind of the world, including the Philippines at the time. Even before the end of the Vietnam War, Ferdinand E. Marcos, Sr. declared martial law in the country in 1972, to last until 1986, when Marcos was ousted in the people power revolution of the EDSA of February 25, 1986. The message of the Spoliarium did not quite correspond to martial law.

After painstaking repair and cleaning by restoration artists over some 40 years, the huge oil on canvas painting, measuring 9.05 meters by 5.59 meters (framed), now hangs from floor to ceiling in the main gallery on the first floor of the National Museum of Fine Arts, Manila. It is the first work of art that greets visitors as soon as they enter the museum.

Before the COVID pandemic restrictions, crowds lined up to see the impressive Spoliarium, even to have photos taken next to it, almost as if we were there, like a place photographed for its massiveness. I went there, it’s done. Seen this, seen that. Is that all there is to see Spoliarium and to be part of that impersonal crowd in which Juan Luna painted, the spectators of the lethal sport-spectator, not quite looking at the fallen gladiator and not feeling the meaning of his death?

The Spoliarium Hall was once the session hall of the House of Representatives, site of the 1934 Constitutional Convention. It was the first time that Filipinos under American rule were allowed to write a basic law that would guide them toward self-reliance and independence. Of the 202 delegates to the 1934 Constitutional Convention, three became Presidents of the Philippines, namely José Laurel, Manuel Roxas and Elpidio Quirino.

The same venue was previously used for the inauguration of former Presidents Manuel L. Quezon in 1935, José P. Laurel in 1943, and Manuel Roxas in 1946, when it was then known as the Legislative Building.

On June 30, 2022, Ferdinand “Bongbong” R. Marcos, Jr. will be inaugurated as 17e President of the Philippines — at the National Museum of Fine Arts, in the irresistible aura of Spoliarium.

Amelia HC Ylagan is a Doctor of Business Administration from the University of the Philippines.