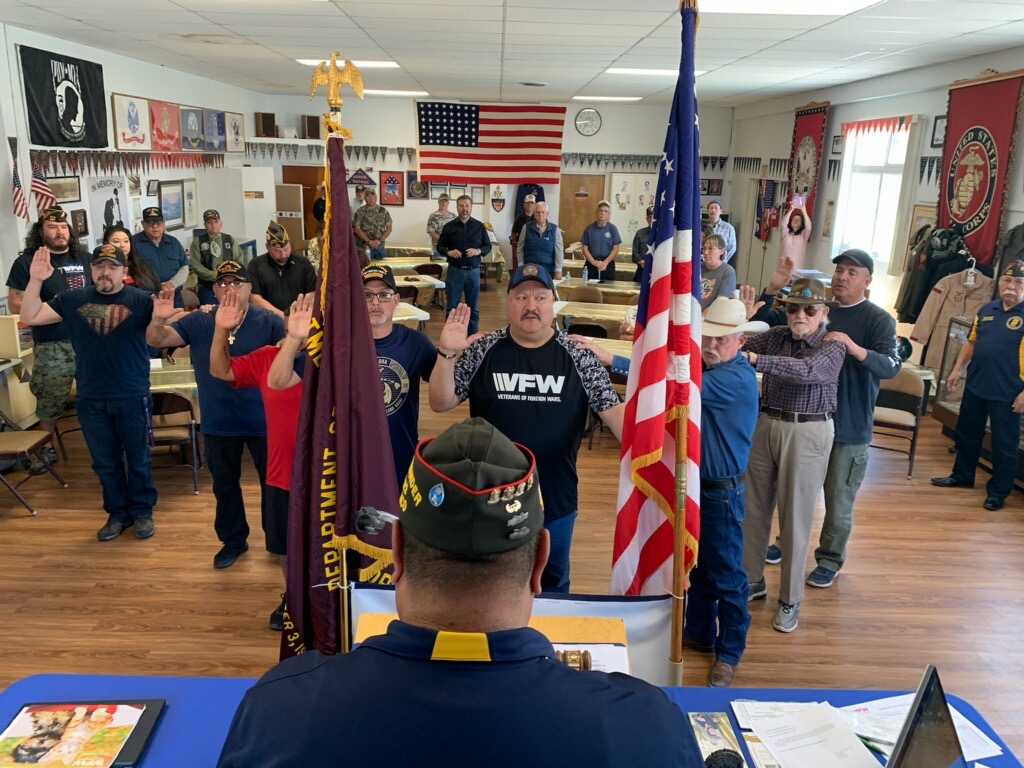 After the organization’s absence of more than six years from Grant County, David R. Torrez Jr. assumed command of the new Veterans of Foreign Wars – VFW – Post 12212 Saturday afternoon at the American Legion Building in Silver City.
The ceremony was presided over by NM State Commander Rogelio Maldonado and his staff, making the new position an official position. The chapter is dedicated to Pablo Gutierrez, who was a POW on the Bataan Death March, and Daniel McBride, who was one of the first paratroopers to jump into Normandy on D-Day.
“It’s a fresh start,” Torrez told the Daily Press. “We must continue on the path that has already been set for us by previous veterans. It’s our turn to take over for them.
“The VFW is an organization that totally supports veterans as well as the community,” he continued. “Support for veterans comes from anything – helping them with disability claims, helping them when needed. If a veteran is hurting and can’t pay their rent, we step in and help them.
Torrez is a 22-year veteran of the United States Navy and a retired chief petty officer. His father, a World War II veteran, was a member of the former post of Silver City, which he says makes him a legacy member. The VFW is entirely nonprofit and will be involved in the community, Torrez said — including participating in the Bataan Memorial re-dedication parade next weekend and providing scholarships to area high schools.
VFW life member and Vietnam veteran Willie Andazola said nearly 40 people attended Saturday’s ceremony, including Republican District 39 Representative Luis Terrazas and Sheriff Frank Gomez.
“It was a really great ceremony, and it’s high time the VFW was back in Grant County,” Andazola said.
Sheriff Gomez is a U.S. Army veteran who served seven years on active duty. He said the VFW brings together veteran brothers and sisters and helps vets in need.
“The whole VFW reboot ceremonies and reorganization – it turned out great,” Gomez said. “The VFW Command Post who came to show David and his staff what the VFW was and how it will operate and be organised, that was great. You saw the unity and collaboration among everyone. It’s really good that you can feel the desire and compassion they have to try to help our local communities.
“It was a beautiful ceremony,” Terrazas said. “It’s a great organization, and what caught my attention the most was that it promotes Americanism.”
He pointed out that there are a number of members involved in the new VFW effort here who are in their 50s and 60s.
“A lot of younger members are establishing that, and I think that’s really important,” Terrazas said. “A lot of veterans from these organizations are older, so it was nice to see some young people coming in.”
Officials for the new position include Senior Vice Commander Jacob Madrid, Junior Vice Commander and Guardsman Dean Delph, Quartermaster Carlos Terrazas, Chaplain Donnie Wright, Administrator Richard Rivera, Administrator Ray Bejarano, L Administrator Tim Montes, Warrant Officer Mike Andazola, Judge Advocate Carlos Terrazas, Surgeon Donnie Wright, Officer of the Day Ray Bejarano and Duty Officer Jacob Madrid.
The previous VFW Post 3347 was in Grant County for decades but was closed in 2015, Torrez said.
“They totally shut it down,” he said. “There was a lot of corruption and the state commander of the VFW had to shut them down. With this Post 3347, everything has been lost, so we are starting from scratch – brand new.
The new VFW post has no permanent building and currently meets on the third Saturday of each month at the American Legion on College Avenue.
—JORDAN ARCHUNDE