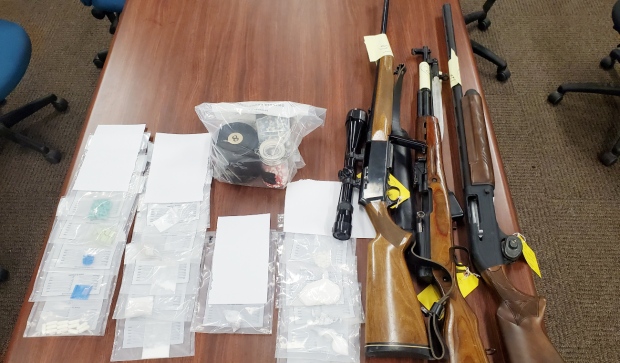 SUDBURY — Four Greater Sudbury residents – three men and a woman, all from the same family – are facing drug, weapons and other charges following searches at two residences in the city on May 14 january.

The raids were conducted by specialized units from the Ontario Provincial Police, Greater Sudbury Police and North Bay Police Services at 3:42 p.m.

“A search of the two residences led to the seizure of three firearms along with ammunition, prohibited weapons, drug paraphernalia, cell phones (and) Canadian currency,” the Provincial Police said. Ontario in a news release.

The drugs seized are believed to be fentanyl, fentanyl purple, methamphetamine tablets, hydromorphone tablets, cocaine, crack and oxycodone tablets. The value of the drugs would be approximately $12,000.

A 53-year-old Sudbury man is charged with multiple offenses including drug possession, trafficking, possession of property obtained by crime and possession of weapons.

He is being held pending a bail hearing in Sudbury.

A 48-year-old woman is charged with multiple counts of drug possession and trafficking. She was released on a promise and is scheduled to appear in Ontario Court of Justice on February 24 in Sudbury.

A 28-year-old man and a 26-year-old man are also charged with multiple counts of drug possession and trafficking. Both have also been released and are due to appear in Ontario Court of Justice on February 24 in Sudbury.