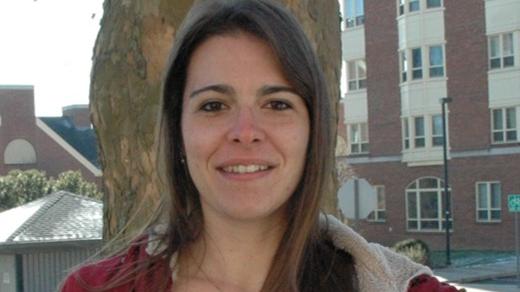 The award, which includes a cash stipend and a memento, is designed to celebrate outstanding achievements by a postdoctoral research fellow that have and will have an impact on their field of study. Andreoli was honored at a university-wide awards ceremony on April 24.

“Sara’s excellence in research is rooted in her passion for science, learning and innovation and fueled by her hard work with sacrifice, resilience and perseverance,” said her advisor, Semih Eser, professor of engineering. energy and geo-environment. “Since joining our lab, Sara has pioneered our research activity and has been instrumental in securing funding for over ten different research projects from internationally renowned companies who are leaders in their fields. .”

Additionally, Eser said, Andreoli contributed to his research group’s collaborative research program with the Department of Chemical Engineering at the Autonomous University of Madrid in Spain.

“In my research, I evaluate and adjust the structure and properties of carbon materials to improve material performance and quality, and to find new applications,” Andreoli said. “My work is oriented towards better selection of raw materials and processing techniques to reduce environmental impact, energy consumption and the cost of final products and processes.”

In each of his projects, Andreoli’s work has advanced the preparation, modification and characterization of carbonaceous materials, improving their performance in industrial applications and environmental remediation.

Andreoli’s passion for his work is rooted in the fact that chemistry is present everywhere.

“Chemistry is sometimes called the ‘central science’ because it touches on all the other natural sciences, like biology, physics and geology,” Andreoli said. “I never end up doing the same thing over and over again in my field. It’s such a dynamic job. We never get bored.”

Andreoli obtained his PhD in Chemistry in 2017 and his BSc in 2011 and his MSc in 2013, both in Industrial Chemistry, all from the University of Bologna in Italy.

After graduating, Andreoli was a postdoctoral researcher at the University of Bologna before receiving the Toso Montanari scholarship to continue her research abroad. She joined the Penn State EMS Energy Institute as a Visiting Scholar in 2017 and then as a Postdoctoral Fellow in 2018.

She has authored eight journal publications, received two patents and given eleven presentations.

In her spare time, Andreoli enjoys cooking, solving puzzles, painting with watercolors and spending time with her husband and son.

She said she was very honored to receive this award and never imagined that she would be able to continue her research in the United States in the past five years.

“At the very beginning, it was scary,” she said. “I had never been to the United States before, but I was very lucky because I found such nice people at the Energy Institute, and it made everything so much easier. They really are a second family for me.

Andreoli completed his appointment at Penn State in June to join Morgan Advanced Materials as a materials scientist. The company is a global manufacturer of specialty products using carbon, advanced ceramics and composites for a wide range of markets.