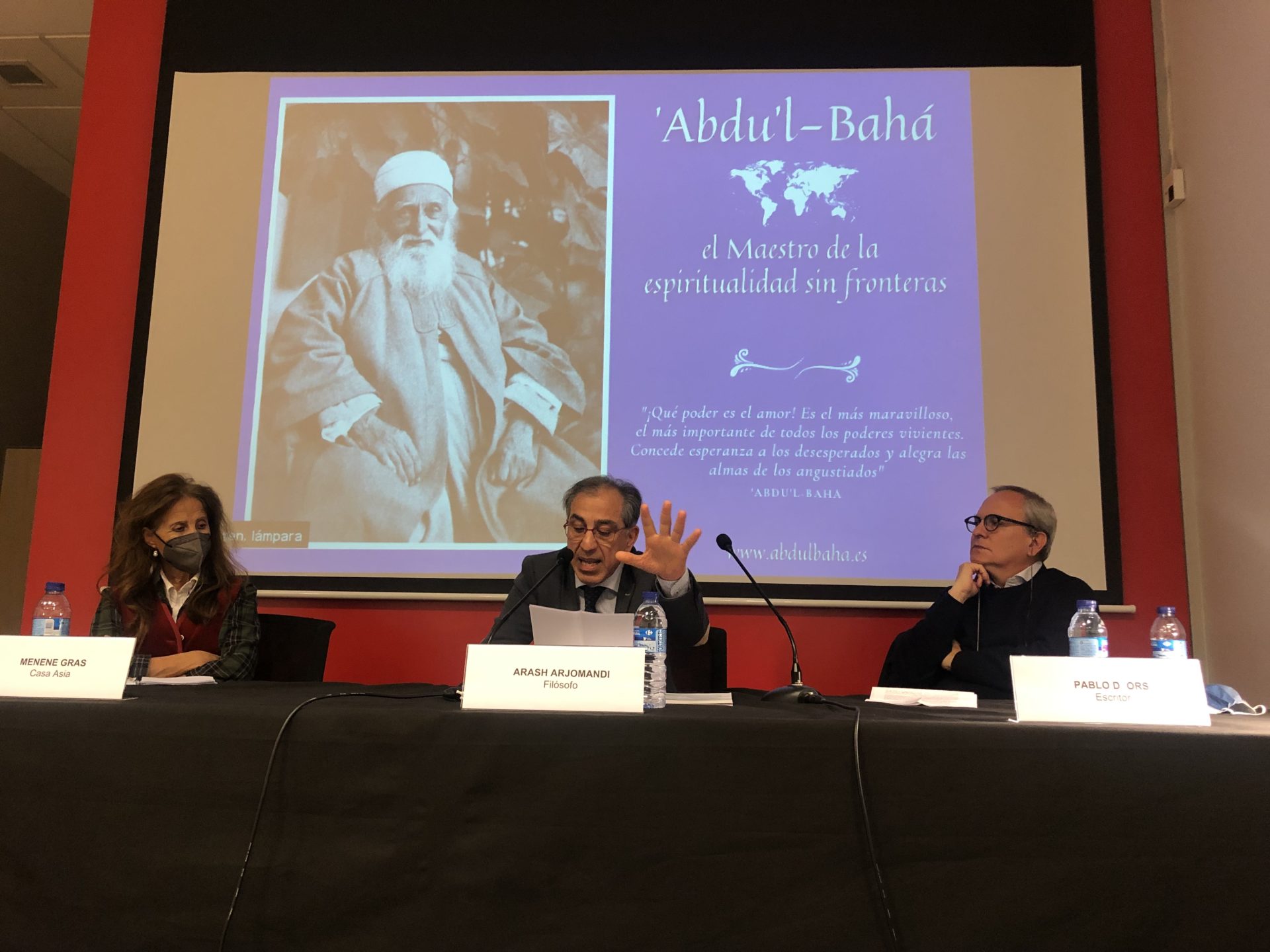 We spoke with Arash Arjomandi and Pablo d’Ors, on the occasion of the dialogue they held in Madrid (Casa Asia), entitled â€œ’Abdu’l BahÃ¡, the master of spirituality without bordersâ€.

While Arjomandi further presented us with the figure of ‘Abdu’l BahÃ¡, d’Ors took us into spaces of silence, where we can meet, meet with each other, and with “the mystery of Light and Love, which is what we call God “.

This meeting is one of the events that the BahÃ¡’Ã­ community is organizing around the world these days, in commemoration of the centenary of the death of the son of the Prophet of the BahÃ¡’Ã­ Faith, BahÃ¡’u’llÃ¡h, who disseminate and develop the principles and proposals of his father across Europe and North America.

Pressenza: For those who do not know his work, what is the contribution that ‘Abdu’l-Baha makes to the BahÃ¡’Ã­ community and to the world?

Arash Arjomandi: There is a confluence of several reasons. From the perspective of a Western citizen, according to the media of the time – specifically the New York Daily – he was the first Eastern personality to visit the United States. He was in Europe and North America, spreading a series of principles which, for the time, were very avant-garde. They were all based on spirituality but aimed to improve society, not just the individual and their well-being.

He spoke about gender equality. We are talking about the first decade of the 20th century. But not tangentially, he put it in the center, and said that peace is not possible – let us remember that we are at the gates of the First Great War – if women do not enter the scene. leadership and business administration, something that today’s economy has demonstrated.

On the other hand, he had predicted the Great War two or three years earlier in the American media and people didn’t believe it, but also what could be done to avoid it. Among other things, it is documented that his work and ideas influenced President Woodrow Wilson, through his eldest daughter, to create the League of Nations. There, he spoke of an international governance structure that could arbitrate in conflicts.

He spoke of the need for religions to dialogue with each other. He said: “the most religious thing is to have no religion, if it is to face.”

Another fundamental principle he defended was that religion and believers should respect objective science much more, because this was the only way for the advancement of civilization to have both dimensions: material and spiritual.

What is a century and a while ago has now had a very big imprint, because the BahÃ¡’Ã­ community (7 million followers in the world) today works in the world for all these initiatives.

Pressenza: ‘Abdu’l-Baha spread the doctrine of his Father in Europe and North America, as you have pointed out, what is the Baha’i community doing today to transfer these teachings?

Arash Arjomandi: He works on three or four lines at the base, in the neighborhoods; it also has its structures at the UN to influence and promote these ideas of international peace. Abdul Baha speaks of a World Federation of Nations. But at the level of the district, at the base, he works on the spiritual education of the children, but in a very cross-border way, not necessarily starting from a confessional adoption. So it works on education in values, values â€‹â€‹that are not taught in school, because schools teach secular values, which is fundamental, but they are insufficient.

We also do similar things to what Pablo does, which he does very well, which is to try to promote certain introspective practices, through prayer, meditation, contemplation, because it really helps for good. -being the person. We also have programs with young people, to empower them towards these universal values.

Pressenza: You spoke of bringing spirituality to young people, to children, to the community, without it being confessional, are we talking about a universal spirituality?

Arash Arjomandi: I don’t necessarily mean non-denominational. I mean when the Bahai community or some other community does it, it’s not necessarily to promote the Bahai name, the goal is something else. If, on this path, there is someone who expresses an interest in joining the Bahai community, or other spiritual paths, it is facilitated. I believe that one of the errors of our time is to want to create a spirituality at all costs, emptied of its religious substratum.

â€œFor there to be spirituality, it must produce a fruit of harmony and compassion.

Pressenza: By religious substrate, do you mean associated with certain figures?

Pablo d’Ors: I used to say that religion is the cup and spirituality is the wine. It seems to me a very clear picture. Or if you prefer, the form and the substance. Religion is cultural, linguistic, liturgical, ritualistic forms … for what we call spirituality, which is nothing other than the connection with the deep self, with the mystery of the Self, as we want to call it, or God in religious language.

Spirituality is gaining more and more prestige, curiously, thanks to the discrediting of religion. In other words, many people today define themselves as spiritual, but not religious. When we get into this debate, I always say, “Tell me ten names of non-religious spiritual people,” and hardly anyone is able to give me one name. In our culture, religion has been very associated with spirituality. Maybe they appoint thinkers, or artistsâ€¦ Of course, thought and art can be spiritual, but not necessarily.

For there to be spirituality, in addition to other things, it must produce a fruit of harmony and compassion. That is, harmony towards oneself and compassion towards others. If your religious, artistic, intellectual or altruistic practice does not produce harmony and serve to generate humanity and brotherhood, I would not call it spirituality.

Silence as a path and a spiritual encounter …

Pressenza: What spiritual experience could unite all of Humanity, all men, and how to access it, what steps to takeâ€¦?

Pablo d’Ors: It’s clear to me. I think we have to move from interreligious dialogue to interreligious silence. Nothing can unite us more than to be together in silence, because I believe that the word can generate, in the best case, intellectual or sentimental affinities. Intellectual: I agree; sentimental: I like you. This is at best, even if it generally generates dissension, even clashes. Whereas silence, under a series of hypotheses – it is not a question of being quiet, just of being quiet – silence, ritualized silence, as an interior search, generates spiritual communion.

Pressenza: Where does the silence you speak of lead?

Pablo d’Ors: To this communion that we are talking about, to realize that if I am in my depths and you are in your depths, this is where the true encounter can be made possible.

The problem is, we’re not down there. As we are in the forms, this is where there is conflict. But if we really managed to be in our own depths, there would be no wars in this world. There would be universal peace. For me, it is universal spirituality.

Arash Arjomandi: I lived this silence. All the people who have done trekking, they experience it. When you go hiking with a group, normally you don’t know most of the people because they are open groups, a very curious phenomenon occurs: after five or ten minutes of walking, in the forest, in the mountains, the feeling that you have is that you have known these people for a long time, always. And often they don’t speak, and I think that’s part of the effect of silence, a silence that makes sense, that is not empty, and that’s where that effect occurs, that is experienced.

Pablo D’Ors: It’s very pretty, I totally agree. In fact, walking or strolling is a spiritual exercise. I think that there, more than the silence, which also influences it, there are two things which generate a kind of fraternity between all the walkers. You actually follow a path and say hello, and you go through town and you don’t say hello to who you pass by, and I think that is due, first of all, to nature. We are good in nature because we are nature. This context brings you back to the fact that there is no difference between one and the other and it evokes you. That is, part of our loss is that we have lost touch with nature. And the second thing is, when you go for a hike, you are on a path. And the path is perhaps the most perfect, most successful metaphor for what human life is. So when you are in a reality as symbolic as a path, you are united with all that exists, with the sun, with othersâ€¦ and because of that, you feel united.

I believe that nature, the path, the walk for example, the interreligious walk, that unites us more than any congress. Well Gandhi already knew that for sure.

What do you hope to find at the end of the road?

On this path you speak of, Pablo, and the one on which you took us, Arash, what are you looking for, what do you hope to find at the end of this path of life, of spirituality?

Pablo d’Ors: Me, meeting God, I am a believer. That is to say with the mystery of Light and Love, which is what we call God.

Arash Arjomandi: That, said from another angle, is the pursuit of happiness, inner and outer well-being. You are looking to be good, but differentiating it from short-term pleasure because this too has been proven – out of all science – that it does not last and requires an escalation effect, that you never finish. On the other hand, when we talk about happiness, inner well-being, satisfaction in life, it is something that is at the bottom, even if we have crises, adversities or difficulties. This is and is, in my opinion, the primary objective of all religious experience. And this is done by finding oneself in the silence of desire, of aspirations, as Buddhism says, but at the same time with this first or last substratum that we can call divinity.

Why do we always feel happy or have a sense of satisfaction when we find something that was our home, our family, our homeland? Because meeting the root is the ultimate experience of well-being, and that ultimate root is our Creator.

Pressenza: A last message for any human being who is looking for …

Pablo d’Ors.– Look with love at your shadow.

And Arash admits: I like Pablo’s sentence, I couldn’t improve it.