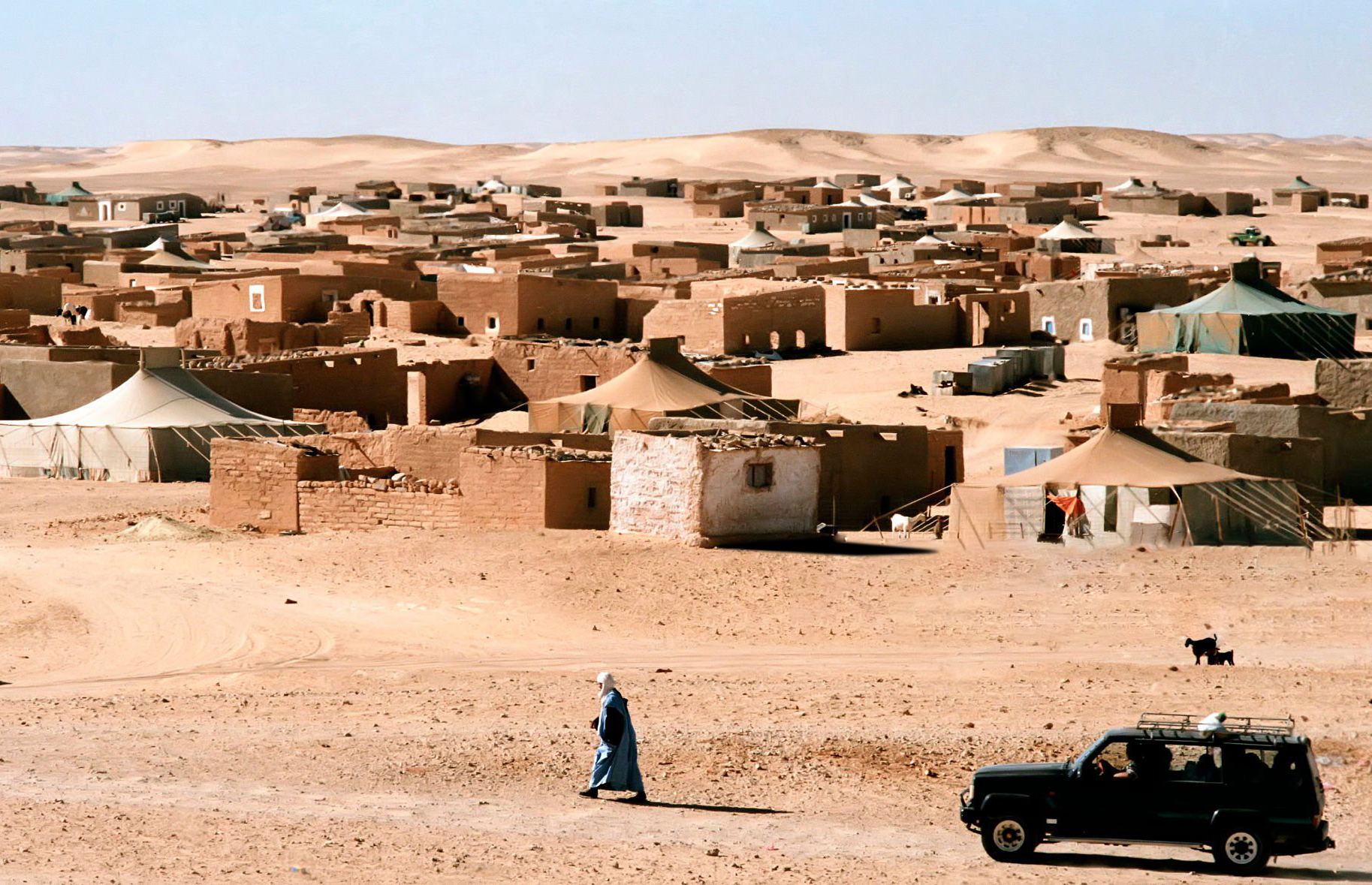 Western Sahara, a territory located northwest of the African Maghreb, has been left behind by history. A victim of Moroccan ideas of national restoration and Spanish colonial goals, the nation, home to nearly 200,000 indigenous Sahrawis, is still struggling to decolonize itself. At the now notorious Berlin Conference of 1984-85, fourteen European nations sought to carve out, as King Leopold II said, “This magnificent African cake”. During this “scramble for Africa”, convened by German Chancellor Otto von Bismarck, each member state was endowed with territories whose borders were artificially drawn to facilitate the extraction of minerals, rubber and timber. Western Sahara would be one of these territories.

At that time, 80% of the African continent was under autonomous African control. The conference, with its arbitrary geographic boundaries, overruled these power structures in favor of European colonial convenience. Western Sahara has a rich history dating back to Berber tribal rule, which maintained contact with the Roman Empire. Its Sahrawi inhabitants, who eventually adopted Arabic linguistic and religious traits, did not escape conquest. They currently live in modern day Mauritania, Morocco and Algeria – an area they call Trab el-Bidham. Indeed, in 1884, Spain claimed a protectorate over the entire coastline from Cape Bojador to Cape Blanc (which now represents the northern and southern limits of modern Western Sahara). When interacting with the Sahrawi nomads, the Spanish invaders regarded these pastoralists as the “Sons of the Clouds” due to their relentless search for rain and fertile pastures for livestock.

The Sahrawis were by no means passive spectators of the theft of their territories. For decades, the militant resistance to the occupation, led largely by the Saharan Moor Ma al-Aynayn, waged an endless series of raids and rebellions. Targeting both Spanish and French settlers in the northwestern Maghreb, the Sahrawi resistance kept the settlers at bay until 1934, when al-Aynayn was defeated at the Battle of Marrakesh and Smara. Since then, an armed guerrilla movement led by indigenous Sahrawis, known as the Polisario Front, has resisted the Spanish colonizers. Until 1975, the region remained a settlement known as Spanish Sahara, which eventually became a key strategic occupied territory due to its rich fisheries and phosphate mines. By 1975, however, Moroccan irredentism had reached unprecedented heights, with King Hassan II insisting that Spanish Sahara belonged to the great Moroccan nation-state.

Due to the state of conflict with the Polisario Front, pressure from neighboring Morocco and Mauritania to cede its lands, and UN calls for African decolonization, Spain agreed to a series of treaties. As Spanish dictator Francisco Franco lay on his deathbed in 1975, the Madrid Agreement and the Western Sahara Partition Agreement were signed. The first officially ended Spanish colonial rule in the region and the second divided Western Sahara in two: one third of the country would belong to Mauritania and the remaining northern part would be under Moroccan control. None of these agreements involved consultation with the Polisario or the Sahrawi population at large. Indeed, all parties believed the area to be “terra nullius”, or void of any human inhabitant. The Polisario fiercely opposed these treaties, especially since the agreements also granted the Spaniards unfettered access to Western Sahara’s fisheries and 500,000 tons of its phosphate annually.

Soon after, a 2,700 km sand wall known as the “berm” was built, separating the western area controlled by Morocco from the arid eastern region controlled by the Polisario. The berm was completed in 1987 with the help of South African, South Korean and Israeli advisers. Sahrawis are not allowed to cross the border, an oppressive apartheid-like tactic that keeps the ethnic minority confined to the nearly uninhabitable Sahara Desert. Since then, eight more barriers have been built, the most recent of which was completed in December 2020. Reminiscent of the apartheid “homelands” system, protests calling for the removal of these walls are regularly organized by advocacy groups human rights and Sahrawi organizations.

This has been the condition of Western Sahara up to the present day, resulting in a massive migration of Sahrawis to neighboring countries. Indeed, the slightest manifestation of Sahrawi identity in occupied Western Sahara justifies torture, imprisonment and even death. The Sahrawi people’s most notable ally has been Algeria, where refugee camps housing Sahrawi immigrants function as independent enclaves. This is the closest resemblance to the independence of the Sahrawis. Each side has its own courts, schools, hospitals, museums and electoral system. It is here, as well as in Polisario-controlled eastern Western Sahara, that Sahrawi oral traditions, poetry, arts and culture flourish under the most treacherous conditions. Poetry, for Sahrawis, is intimately linked to the struggle and their quest for independence, with many poets becoming political leaders within the Polisario. Women tend to be the guardians of this tradition, encouraged to verbalize feminist expression as part of the wider Sahrawi matriarchy. It became, as researcher Joanna Allen puts it, a “sword of resistance.” These poems have been translated from Hassaniya Arabic, the language of the Sahrawi diaspora.

No international media is allowed in the occupied territory, so most reporting on the dire situation in Western Sahara comes from stories of refugees in Algeria and elsewhere. In a particularly gruesome account, Moroccan security forces assaulted the president of the Sahrawi organization “League for the Defense of Human Rights and Against the Pillage of Resources” in her own home in Boujdour, occupied Western Sahara. In November 2020, Sultana Khaya was placed under house arrest for her human rights activities and, in May 2021, was attacked by soldiers. Amnesty International reported that Moroccan forces then sexually assaulted Khaya, her sisters and her elderly mother. She is far from the only activist to have been attacked and intimidated by Moroccan officials. Since the resumption of fighting between Morocco and the Polisario in November 2020, Amnesty has recorded human rights violations in the form of torture or other ill-treatment against 22 Sahrawi activists, journalists, human rights defenders and minors. This targeted brutality strongly mimics the activities and tactics of the security wing of the apartheid regime or the Israeli Mossad.

In another incident of state-sanctioned brutality, Moroccan military forces repeatedly beat and abused people they were detaining at the Gdeim Izik refugee camp on November 8, 2010, in the Western Sahara capital of El- Ayoun. After burning 6,500 tents and incarcerating hundreds of refugees, soldiers reportedly opened fire on Sahrawi civilians resisting the dismantling of their homes. The protests that followed these instances of brutality are commonly referred to as the “Third Sahrawi Intifada,” which roughly translates from Arabic to “shake.” The protests are synonymous with civil unrest in the Palestinian context and have been cited by linguist and philosopher Noam Chomsky as the genesis of the Arab uprisings. The Polisario maintains that the Intifada cost the lives of 36 Sahrawi civilians and injured 1,200 Sahrawi demonstrators.

One thing stands out, however. The West absolutely supports and maintains this occupation. The United Nations classifies the region as non-decolonized territory, and the majority of African Union countries (except those that adopted US foreign aid instead of Sino-Soviet during the Cold War) support the Polisario in its attempt to establish a Sahrawi Arab democracy. Republic (SADR). Countries recognizing Morocco and its claim to the region include the United States, Israel, France and, of course, Spain. Australia has yet to recognize the SADR, despite a 2004 Senate motion to “positively consider extending diplomatic recognition to the SADR at the appropriate time”.

Australia’s failure to acknowledge the plight of Sahrawis is based on its vested interests in the region. In fact, we benefit from the Moroccan occupation. Western Sahara phosphates are sold to Australian fertilizer companies by Moroccan mining companies. Used to produce superphosphate fertilizers essential for agriculture to improve pastures and many crops, the occupation of Western Sahara literally feeds millions of Australians. The purchase of these phosphates and the production of superphosphate fertilizers are primarily purchased by Impact Fertilizers Australia, a “leading supplier of fertilizers in Eastern Australia including Tasmania”. As a student body espousing the convictions of justice and global solidarity, we must call on our main leaders to divest completely and unconditionally from the Moroccan phosphate industry.

The issue was brought much closer to home in 2019, when the University of Sydney Law School invited Sahrawi activist and human rights defender Tecber Ahmed Saleh to speak at an event . Controversy erupted when the school abruptly canceled its event, which had sold out. Saleh was to speak on the “legal, political and human aspects” of the situation in Western Sahara, and shortly after it was revealed that the law school had been issued a warning by the Moroccan embassy. Although the content of the warning is so far unknown to students, USyd provided an explanation for the cancellation, citing an avoidance of an “unfortunate perception that the university as a whole takes a particular stance on relevant issues”.

The University rejected claims that Moroccan pressure was a factor in the decision, saying the event “was not canceled due to outside pressure, but because it was seen as a duplicate of a similar event featuring the same keynote speaker that was successfully held on campus just two and a half weeks earlier. The events differed in that the speaker had to discuss “legal, political and of the situation in Western Sahara, as opposed to decolonization and human rights more broadly. This is one of many accusations of foreign interference and interference in University operations.

The Sahrawi struggle is a global struggle. There will be no liberation for this oppressed minority without global condemnation of the Spanish, Moroccan and Mauritanian occupation of the region, the complete suppression of commercial interests and the boycott of Moroccan fishing and phosphate exports. All UN nations must recognize SADR, and students across Australia and the world must mobilize to encourage such an outcome. Without global condemnation, as we saw in South Africa during Apartheid, history will leave Sahrawis in a state of paralysis.