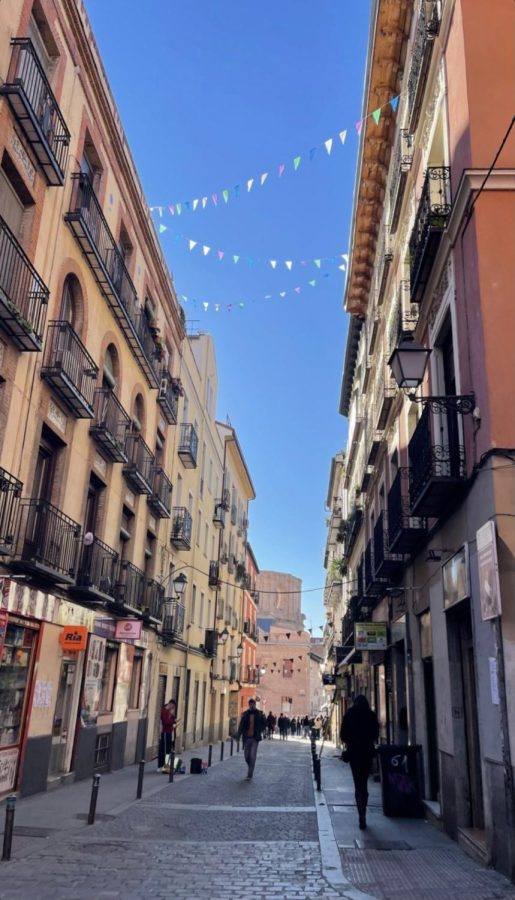 During her first year on the Suffolk University campus in Madrid, Maile Petersen dealt with culture shock, world travel and found herself embracing discomfort and new adventures.

From the moment she stepped onto the small Suffolk campus in the heart of Spain, Petersen said she felt like she belonged.

“I love Suffolk Madrid. Every day I couldn’t imagine being at a different university,” said Petersen, a student from Spain.

Petersen first discovered Suffolk during her first year of high school and was immediately drawn when she discovered the Madrid campus.

“Instantly, I was like, ‘I need to be there,'” she said. “This is where I wanted to be. I’ve always wanted to travel, but most of all I wanted a place where I could practice my Spanish.”

Petersen’s family is Mexican and many members speak Spanish, but his mother chose to teach him English growing up. However, Petersen said she fondly remembers hearing Spanish wherever she was and yearning to understand.

“I have always been surrounded by language. My mom was watching TV, on Saturday mornings she was putting on some music and I really wanted to understand,” she said.

Petersen began learning Spanish in seventh grade and considers his family and culture his inspiration to continue his language education. She added that she wanted to feel more connected to her loved ones through Spanish.

In Madrid, Petersen said she was forced to use her Spanish on a daily basis, pushing her completely out of her comfort zone.

“I never used my Spanish [before Madrid], even in my own house, I was always nervous talking with my mom,” Petersen said. “I was so scared and ashamed of my Spanish, but when I got here I was like, ‘I have to do this’.”

While Suffolk Madrid has allowed Petersen to deepen her Spanish skills, she added that the bustling city and campus are full of opportunities for any student. Petersen said that every day she is surrounded by like-minded people and finds herself having new experiences she never thought she would have after growing up in a small community.

After moving to Madrid, Petersen said she immediately noticed a change in her lifestyle and mindset.

“Getting out of your comfort zone is something that I’ve really noticed, which is a big change from high school, because you’re with new people, different culture, different language, everything is different, so you fit in and I think it’s just beautiful,” she said.

She noted the difference between meal times and the number of Spaniards staying up late at night, which she didn’t expect to embrace as much as she did.

“After being here for a few months I can’t imagine going back, I love how a meal isn’t rushed here and I’ve spent hours outside enjoying my time and just taking it all in and staying up later to eat makes me want the day to have more hours,” Petersen said.

Although Petersen admitted that the anxiety and culture shock of living abroad affected her, she continues to maintain a positive attitude. Going with the flow, she said, was key to immersing herself in Spain.

“I really try to fit in, I fake it until I get it right and it seems to have worked,” Petersen said. “This is honestly my best advice: to immerse yourself in a new country [do] I don’t stick to the routine, I enjoy the new culture of Spain and other European countries and learn firsthand so many amazing things that I could never have imagined.

Like many students who find themselves studying abroad in Europe, Petersen was able to travel across the continent with relative ease. From the Netherlands and France to Morocco and Italy, her ambition has taken her across countries and continents.

“I love the ability to travel, [which] I never got to have it when I was growing up,” Petersen said. She added that she found travel to be extremely accessible to students and was amazed at how many new places were within reach.

Petersen will be back in Boston for her second year, but said she has mixed feelings about returning home after spending a year in Madrid.

“It’s going to be very difficult to leave, just because every day here I learn something new, I meet someone new. [I] having the ability to see so much more than I feel like I saw where I came from,” she said.

Petersen said that although she has embraced the European lifestyle, she will always carry the values ​​of her home culture with her wherever she goes.

“I will never forget my roots and always carry my culture with pride, but I take it all in with an open heart and mind,” Petersen said.