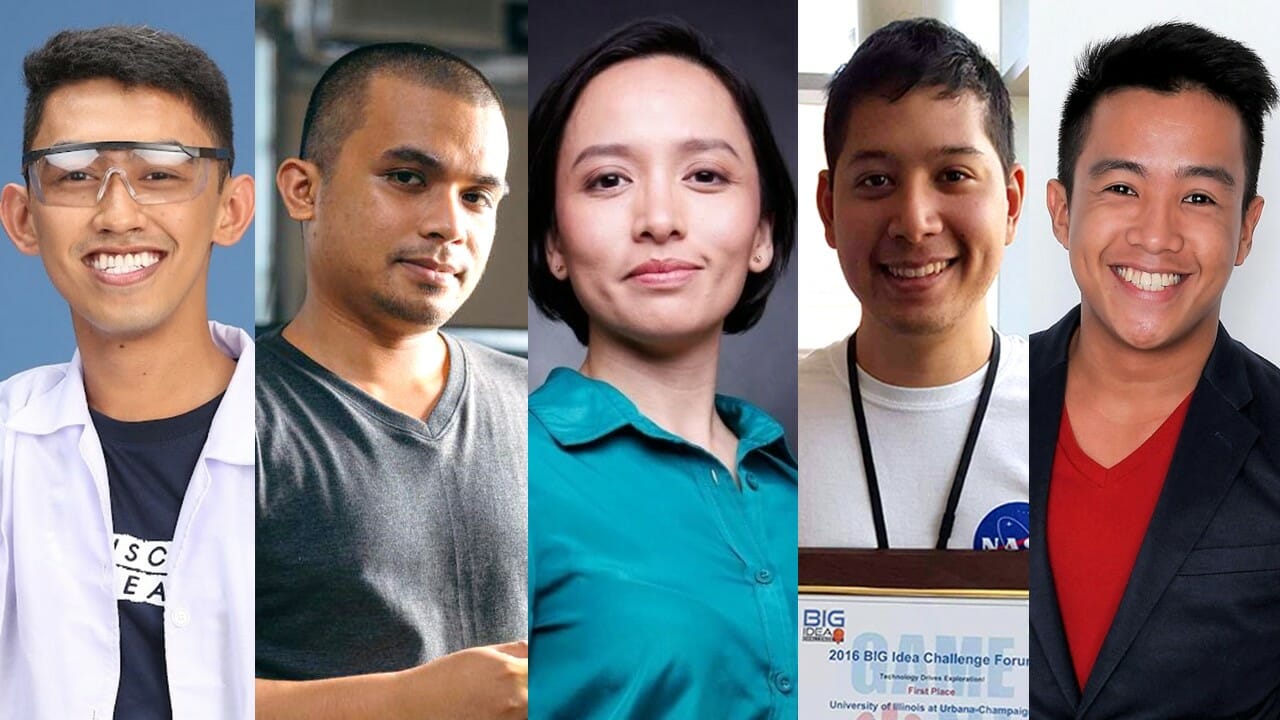 While Filipinos have mainly made names around the world in the entertainment industry, we are actually known to be globally competitive in engineering and science as well.

Here is a list of the top 20 Pinoy engineers and young scientists who have become another pride of the Philippines.

Dubbed the AuREUS system, the new material is produced from rotten vegetables and fruit. It is able to absorb UV light from the sun and convert it into electricity, making it suitable for use for windows and walls. Out of 1,800 submissions from around the world, inventor James Dyson personally selected Maigue’s AuREUS system to win the award.

Jose Mari Tuason, a Filipino student at the University of Illinois, and his teammates won the 2016 Breakthrough, Innovative, and Game-changing (BIG) Idea Challenge sponsored by NASA. For this technical design competition, Tuason and his team convinced a panel of space exploration specialists with their innovative concept of improving the lifting capacities of the hypersonic inflatable aerodynamic decelerator (HIAD) on space stations.

Filipino engineer Earl Patrick Forlales, 23, won first prize in the Cities for our Future competition from the Royal Institute of Chartered Surveyors. His winning project? The “CUBO”, a low cost housing design made of bamboo and can be built in four hours.

Patrick Parone and Hannah Ramos from the University of the Philippines Diliman were crowned National Champions at the Philippine 2020 Finals of Go Green, a global competition hosted by technology company Schneider Electric (SE) to inspire students to develop ideas that would influence the future of the energy industry. Their winning project is called â€œKislapâ€, a portable water purifier that generates energy through the evaporation of water.

Mark Kennedy Bantugon, a farmer’s child from Batangas and a graduate of the Philippine State College of Aeronautics with a degree in aeronautical engineering, has been named the national winner of the 2021 James Dyson Prize for his creative use of pili to develop a “sustainable putty” for planes . Thanks to his agricultural experience, he was able to turn waste pili resin into a sealant that prevents fuel leaks in airplanes.

Cuyos and his team won the competition with their Air-Quality Sensor, called Re-LAQS (Respiratory Local Air-Quality Sensor). The sensor was developed to inform and alert people who are particularly sensitive to changes in air quality (for example, the sudden presence of potentially dangerous gases).

Angelica Anne Munar, Ryan Ramelo, Paulo Santos and Alexis Declaro, students of the Institute of Civil Engineering, University of the Philippines Diliman, won the Eco-Concrete competition championship at the American Concrete Institute’s Spring 2019 convention ( ACI) in Quebec, Canada. In their winning project, they made eco-friendly concrete by partially substituting Diliman’s tuff for cement and reusing discarded glass. They beat schools in Asia, Europe, and North and South America.

Professor Kathleen Aviso, an engineer and current Assistant Dean for Research and Advanced Studies at DLSU’s Gokongwei College of Engineering, was named one of Asia’s Rising Scientists by asianscientist.com in 2020. This was in recognition of its substantial contribution to environmental research.

In 2008, Aviso also received the Best Scientific Paper Award from the National Academy of Science and Technology of the Philippines. She also became a finalist for the 2016 ASEAN-United States Women’s Science Award.

Part of his job is to develop mathematical models to help agencies and businesses make sound environmental decisions. Currently, Aviso is exploring energy systems that integrate renewable energies and conventional fossil fuels to meet energy demand with little effect on the environment.

Jessica A. de Torres, a Filipino engineer working in the United Arab Emirates, was named “Highly Recommended Plumbing Engineer of the Year” at the 2020 MEP (Mechanical, Electrical, and Plumbing) Middle East Awards. This prestigious award recognizes individuals and companies who have made significant contributions to the sustainable development of the construction landscape in the Middle East.

Gay Jane Perez, Assistant Professor in the Department of Environmental Sciences and Meteorology at UP Diliman College of Science, received the 2018 ASEAN-US Science Award for Women, making her the first Filipina to receive the award. renowned award. Perez was recognized for her outstanding research on precision agriculture and how she can improve productivity in the Philippines by integrating satellite observations with models and ground data to better generate and build agricultural forecasting tools. . It was also part of the DOST Philippines-Microsat program, which successfully launched Diwata-1 into orbit in 2016.

Are there more Pinoy engineers, Filipino scientists, and innovators who should be included here? Let us know.