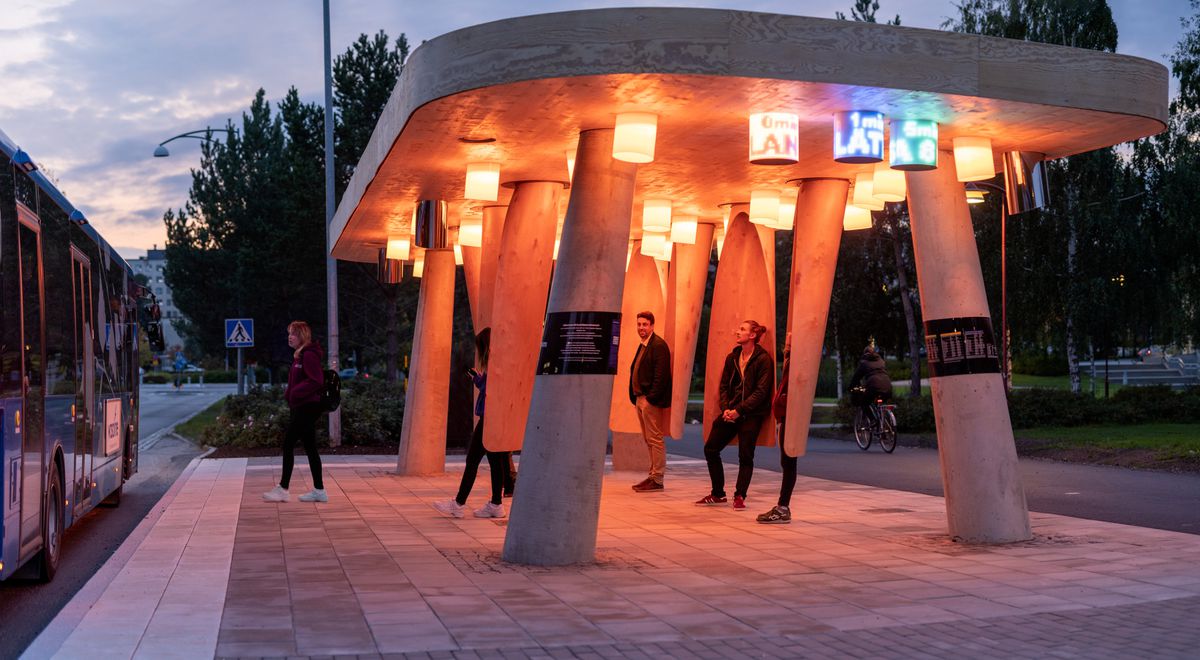 In the interwar period, the town of UmeÃ¥, located 600 kilometers north of Stockholm, had around 10,000 inhabitants. A century later, its clear commitment to green policies with a gender perspective made it a European benchmark. The largest municipality in the northern half of Sweden aims to exceed 200,000 inhabitants by 2050, and by much sooner – in 2030 – it hopes to achieve carbon neutrality (emitting the same volume of carbon dioxide as that withdrawn of the atmosphere).

The inhabitants of small UmeÃ¥ (90,000 inhabitants) – there are almost 500 most populous cities in the EU, although, of these, only Oulu, Finland is further north – seem the purer of the whole continent. A study by the Barcelona Institute for Global Health, which analyzed nearly 1,000 European cities, indicates that the city on the shores of the Gulf of Bothnia, in the Baltic Sea, is the one with the lowest mortality linked to pollution.

â€œIt takes decades of work to get there,â€ explains Philip NÃ¤slund, City Manager for Strategic Urban Development. “But there is still a lot of work to be done,” he adds, smiling, gesturing to a car descending the entrance ramp to a large parking lot in the heart of the city. “I hope that in a few years we will have converted this car park into something more useful, â€says NÃ¤slund, one of the more than 10,000 employees of the UmeÃ¥ town hall, whose municipality covers an area similar to that of Cantabria, with a score of over 40,000 inhabitants.

The exponential growth of recent years is due, in part, to the arrival of foreigners – there are inhabitants of more than 100 different nationalities – but above all to the thousands of Swedes who have moved from the south attracted by the multiple offers of ‘green jobs and more affordable rents. One of them is Lisa Redin, who came from Karlstad over ten years ago and is now Hardened coordinator in UmeÃ¥, an EU initiative to implement strategies that can be replicated by other localities in their transformation into Smart cities (Smart cities).

Most of the projects in UmeÃ¥ revolve around the University, which is, with more than 30,000 students, another of the key factors in urban expansion. Redin explains, during a trip financed by the European Parliament, that “the objective is to optimize the energy used as much as possible”. Over the past five years, hundreds of sensors have been installed in classrooms, offices and study rooms to monitor and regulate occupancy times, temperature and carbon dioxide levels in detail. In addition, dozens of solar panels have been installed and the insulation, heating and ventilation systems have been improved. In some buildings, energy consumption has been reduced by up to 85%.

In the basement of the university district is a renewable energy storage plant, one of the 30 largest in the world, which accumulates photovoltaic energy during the warm months and distributes what every property needs when demand increases. , especially when the temperature drops several days a year. year below -15 degrees centigrade.

The sensors are not exclusive to the university district, they are all over the city, the first in Europe to have 5G coverage. A clear example is the district of Ã…lidhem, where a fire that started in a kitchen destroyed more than 70 apartments in 2008 and left 200 citizens homeless in this area which was urbanized in the 1960s and inhabited mainly by students and immigrants. The drama has become an opportunity. The Town Hall wanted to convert the district, of around 6,000 inhabitants and three kilometers from the center, into an ideal of energy efficiency.

The MEP of the Dutch party GroenLinks (Green Left), one of the most prominent figures of Brussels environmentalists, argues over the phone that the fuel poverty of many Europeans is due “in large part” precisely to the inefficient consumption that these households need, summer and winter. This is not the case with UmeÃ¥. “Coronavirus funds [el plan de recuperaciÃ³n econÃ³mica de la UE, dotado con 750.000 millones de euros] they offer us a unique opportunity; If a large part is allocated to the renovation of buildings, it will be possible to improve the quality of life in disadvantaged sectors, while generating jobs and combating climate change, â€he argues.

After the reconstruction and rehabilitation of the houses – insulating windows, ventilation systems with heat recovery and the installation of tools for a detailed control of the consumption in each house – the energy consumed annually in Ã…lidhem has been reduced to less than half, and, like in most parts of the city, it’s completely renewable – hydro, solar, wind and biomass.

The neighborhood is also a clear example of the alternative model of production and consumption that flourishes throughout UmeÃ¥. There are restaurants that only serve dishes made from local products and a public space where residents can drop off sports equipment they no longer use (skis, tents, snowshoes, etc.) so that others can use it for free for two weeks. Last August, the City Council added an additional post to its organization chart: that of circular economy manager. It is occupied by Liv Ã–berg, who has focused in recent months on feeding and reusing household appliances and furniture, and whose first goal is “that half of the food consumed is produced regionally”. Ã–berg underlines the public support offered to the dozens of private initiatives which each year join the dynamic of sustainable development.

Another obsession of the town hall of UmeÃ¥ is to transform mobility. According to their calculations, commuting is responsible for half (48%) of the annual COâ‚‚ emissions of its inhabitants, and statistics show that the car is used much more than in some Dutch or Danish cities. There are countless initiatives to ban cars – especially if they are not electric. The carbon neutrality to which UmeÃ¥ aspires by the end of this decade is not an achievable objective for the great majority of European cities; much less for cities like Madrid, Rome or Athens, in which decades of town planning with the private car as a key element weigh too heavily. Bas Eickhout, vice-chairman of the European Parliament’s environment committee, believes that beyond the “greening of cities, especially in the Mediterranean”, there are two axes on which the transformation of large cities must be based: sustainable mobility and the rehabilitation of old houses.

To mitigate the environmental impact of the car in this Swedish region, a bridge is even being built on one of the access roads to the city with the sole aim of making the round trip easier that thousands of reindeer perform annually between the mountains of Lapland and the abundant lichens of the Ume River Delta.

NÃ¤slund, city manager of Strategic Urban Development, rides a bicycle for twelve months. He doesn’t think the subarctic climate is an obstacle. â€œWe are very efficient at clearing snow from the tracks and almost all trips are less than five kilometers,â€ he says next to a station of the brand new shared electric bicycle system. Contrary to those which abound in Europe, this one does not have a single model of velocipede, but of more than ten, of which especially the accessories of loading vary. “Drop the children off at school before going to work, doing the weekly shopping.” There are fewer and fewer excuses, â€explains NÃ¤slund. Enclosed parking spaces for bicycles and stands with basic repair tools have also been set up.

The municipal bus fleet has recently been expanded and modernized; nothing remains that is not electric. The objective now is to make its use attractive for young people. Thanks to a Application, residents can claim free tickets if they meet the targets for water and electricity consumption in their accommodation. At the end of 2019, a stop was inaugurated with a few semi-cylindrical wooden planks suspended from the ceiling intended to allow users to protect themselves from the wind by leaning on them. Colored lights on the ceiling warn of the arrival of the bus and its respective line.

A study by the Technical University of Vienna places the population of UmeÃ¥ as “the most environmentally conscious” in all of Europe. Johanna Cory, communications manager of the public water and urban waste treatment company, specifies that citizen collaboration is essential for the proper functioning of incineration plants, which burn the waste essential to the district heating network. Cory, who lectures on recycling to elementary school students, describes, â€œSometimes they already know so much that I have next to nothing to teach them. Recently, several stations have been set up where more delicate products, such as metals, paints, batteries or light bulbs, can be deposited at any time.

Adrien Fournier, a French computer scientist who has lived in UmeÃ¥ for four years and is expecting his first child, is clear that for now he will continue to endure the harsh winter days with 20-hour nights and thermometers bordering on – 30Âº Celsius. â€œUnlike many parts of Europe, children grow up here learning to care for and love nature,â€ he says.

UmeÃ¥ is not only notable for its pioneering sustainability initiatives. At the end of the 1980s, the municipal plenary assembly approved the creation of a Gender Perspective department. â€œI think we were the first in the world,â€ rejoices Annika Dalen, who is now part of this team. In 2014, when it was European Capital of Culture, the Women’s Museum was inaugurated. The measures range from renovating a tunnel to widen it, light it up and provide it with side exits, to management plans for sports areas to balance uses between teams of both sexes. In most preschools, there is a specialist in â€œgender pedagogyâ€, and Dalen adds that any decree must have a prior recommendation from his department, even if this is not binding.