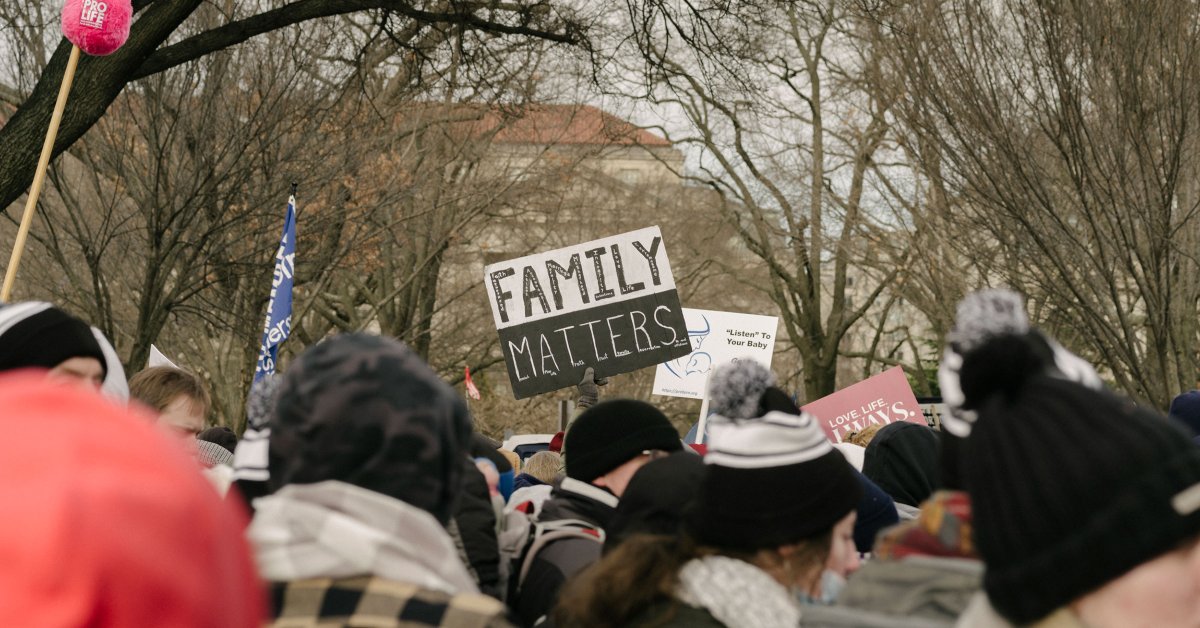 IIn the week since a gunman killed 10 people at a grocery store in Buffalo, New York, countless articles and TV spots exposed the racist conspiracy he shared in a hateful manifesto before his shooting.

The conspiracy – the so-called Great Replacement Theory – is the idea that Democratic lawmakers and other elites are working to force white people into a minority in the United States, usually by increasing immigration. Fox News pundit Tucker Carlson hammered home the idea more than 400 times as he opposed immigration on his show, according to a New York Times investigation, and elected Republicans, including Rep. Elise Stefanik of New York and Rep. Matt Gaetz of Florida, have squarely echoed the language in comments and campaign materials criticizing the Democrats’ immigration policy.

But the conspiracy theory also drives another cornerstone of the modern Republican agenda: opposition to abortion.

The anti-abortion movement was born in the 19th century out of white fears of a declining white birth rate, says Jennifer Holland, an assistant professor of history at the University of Oklahoma. The idea was that by allowing white women to have abortions, legislators left white populations vulnerable to demographic “replacement” by non-white or immigrant groups with higher birth rates. In the 1870s and 1880s, fear was centered primarily on Jewish and Catholic immigrants, especially those from Italy or Ireland, who at the time had higher birth rates than white Protestants; now, white power organizations that embrace the “replacement theory” focus on black and Latino communities, which have higher birth rates than whites.

Although the Buffalo shooter didn’t explicitly mention the word “abortion” in his manifesto, he does refer to birth rates more than 40 times, according to a TIME analysis, and repeatedly voices his belief that ” white birth rates must change.

This week, Matt Schlapp, the head of the Conservative Political Action Conference, explicitly linked replacement theory, immigration and anti-abortion, telling reporters in Hungary that the reversal Roe vs. Wade, the 1973 Supreme Court decision enshrining the right to abortion, would be a good “first step” in solving the “problem” of immigration to the United States. “If you’re worried about that quote-unquote replacement, why not start there?” ” he said. “Start by allowing our own people to live.”

The modern mainstream anti-abortion movement denounces racist groups and ideologies. In January, after white supremacists marched alongside protesters at the March for Life event and then showed up at the March for Life rally in Washington, D.C., the anti-abortion movement’s largest annual rally, organizers denounced any association with them. “We condemn any organization that seeks to exclude any person or group of people because of the color of their skin or any other characteristic,” Jeanne Mancini, president of the March for Life, said in a statement to TIME after the January gathering. Neither Mancini nor National Right to Life, another prominent national anti-abortion group, responded to TIME’s requests for comment for this article.

But while mainstream anti-abortion activists categorically reject right-wing extremists, the relationship is complicated by the fact that right-wing extremists view the anti-abortion movement as a useful political ally and a potential breeding ground for new recruits. In December, Thomas Rousseau, the leader of the white nationalist group Patriot Front, reminded his members of impending recruiting and proselytizing opportunities. “Our two March For Life events are coming up,” he wrote to his followers, according to leaked threads published by nonprofit media outlet Unicorn Riot. “The goal is to be more low-key, friendly, in small groups, and to get as many fliers out as possible.”

Right-wing extremists are attaching themselves “like a leech” to traditional Republican constituencies, Mike Madrid, a seasoned Republican strategist who has criticized the party in the Trump era, told TIME earlier this year. In doing so, he says, they legitimize and normalize their extremist positions.

Read more: The upcoming battle for the future of the anti-abortion movement

Some mainstream anti-abortion activists worry that racist and nationalist groups seem to be getting louder at their events. “When you couple that nationalism with a largely religious movement, you start to see these kinds of things popping up,” says Destiny Herndon-De La Rosa, founder of the anti-abortion group New Wave Feminists, which calls itself a “pro feminist” organization. -life “. “But never to the degree this year. I was horrified that a real white supremacist group was there” at the March for Life rally in DC

In 2018, Herndon-De La Rosa’s organization expelled its vice president, Kristen Hatten, after she began sharing white supremacist ideas, including sharing a Tweet that mocked the idea of ​​Muslims becoming a majority. Briton on social media, according to HuffPost. Hatten later told HuffPost, “I said I identify with the alt-right to a large degree, and I do… That said, there are elements within the alt-right with which I disagree. I am not a National Socialist or a “Nazi”. I am not a eugenicist. In fact, I remain pro-life.

Belief in right-wing conspiracies is rising in an increasingly conservative Republican Party, says Kurt Braddock, assistant professor of communications at American University and faculty member of the Polarization and Extremism Research Innovation Lab from school. “What we’ve seen from the right in recent years is that what was originally on the fringe in 2015, from 2016 the fringe has moved more and more into the mainstream,” he said.

Nearly one in three American adults now hold a belief consistent with the “replacement theory.” According to an Associated Press and NORC Center for Public Affairs Research poll released May 9, one-third of Americans believe that “a group of people are trying to replace native Americans with immigrants for electoral gain.” Another 29% share the fear that an increase in immigration will lead to native Americans losing their influence in culture and politics.

A history of “replacement theory” in the anti-abortion movement

Before the Civil War, abortion was legal with minimal restrictions in the United States. But when the war ended, the fears of white Protestant Americans changed. After slavery was outlawed, the women’s suffrage movement began and immigration increased, the idea that a white Protestant America would soon be “diluted” or “replaced” by immigrant groups gained momentum. In 1858, a group of physicians from the American Medical Association, led by Horatio Storer, began lobbying lawmakers to begin restricting and banning abortions on the grounds that a low birth rate among Whites would allow immigrants, especially Catholics from Ireland and other parts of Europe, to overtake white Protestants demographically.

While “replacement theory” was only given a name in 2012, these 19th century activists explicitly embraced the notion and the language. “If the majority of all young people and children under fifteen in a place are those of foreign parentage, and are increasing relatively in number each year, how long will it be before such power is felt in the management, if not under the control, of the municipal government of these cities and towns? said one of those doctors, according to researchers from Northwestern University and the University of California at Berkeley.

Storer’s move succeeded. In 1900, abortion was illegal in all American states, marking a profound change in four decades. (Ironically, Storer would convert to Catholicism in the last years of his life, according to James Madison University’s undergraduate research journal).

“It’s really a radical departure from the American laws of before,” said Holland, of the University of Oklahoma. Prior to the involvement of this group of doctors in the procedure, abortion was largely legal and was inherited by English common law. “The question is why would state legislatures be open to [abortion restrictions]Hollande adds. “It has a lot to do with race.”

Even on its own terms, the logic of anti-abortion racism is deeply convoluted. People of color receive disproportionately more abortions than white Americans. But Seyward Darby, author of Sisters in Hate: American Women on the Frontlines of White Nationalism, says that logic is not the point. “You have to get away from the theory and you have to realize the kind of larger worldview,” she told TIME. “What they ultimately want is a series of policies, including getting white women to have more babies, by force if necessary, and then finding ways if not to reduce the number of babies. children who are not white in the country and then marginalize them to such an extent that they have no power.

Some far-right anti-abortion extremists oppose both immigration and abortion for white women only, and throughout history similar racist thinking has underpinned campaigns of forced sterilization of women of color. “For white supremacists, they’re not looking to end abortion because of any morality related to the fetus itself,” says Alex DiBranco, executive director of the Male Supremacism Research Institute, a organization of experts and scholars who study misogynistic movements. and ideology. “They see it as a strategic and tactical way to force white women into childbirth.”

With “replacement theory” and other racist ideologies no longer relegated to 19th century lobbying efforts or to the fringes of the internet, political extremism experts say Americans must now grapple with the implications of these beliefs about mainstream politics. “It’s hard to get into the minds of people who engage in this violence and say they’re pro-life,” says Braddock of American University. “Generally speaking…many of these individuals, what they will say is that they had to engage in violence to precipitate something that would inherently make the world around them a better place.”

With reporting by Vera Bergengruen