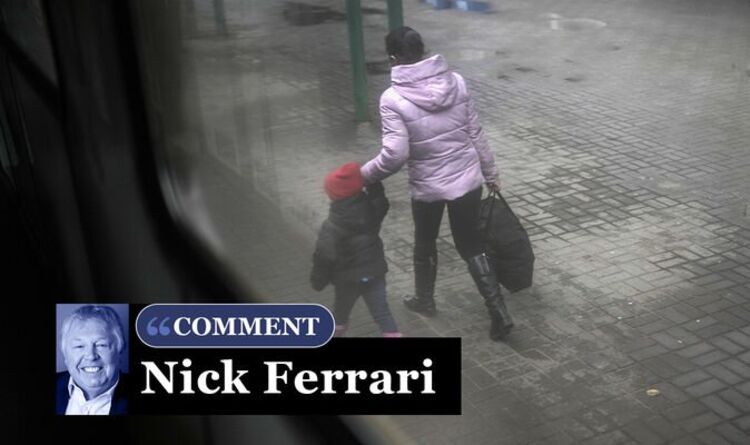 These poor people deserve nothing but sympathy and support. (Image: Getty)

With the public having (more than) done their part, it’s now up to the government to step up and match that – and that’s where the plan could meet its biggest and potentially immovable obstacle. In truth, they have already been bailed out by the nation’s bounty

When it was set up, the Homes for Ukrainians program looked like a weird version of Tinder, for Brits wanting to connect with refugees in Ukraine who were looking for friendship, support, and more. .and a roof over their heads.

You can only continue if you can nominate a specific Ukrainian or family and in return you will be paid £350 per month.

But you must accept a minimum period of six months of hosting. Not only is that quite a commitment, but it’s unclear what you’re supposed to do when the six months are up and you want the room back.

However, a series of previous issues urgently need to be addressed by the government.

Firstly, these poor individuals deserve nothing but sympathy and support, but much of what they are sure they need will fall on the already overstretched shoulders of the NHS.

They will have fled for their lives, said goodbye to their husbands or fathers and waited in dread for the call telling them that they could have perished fighting for their country.

The children will have been uprooted overnight and will not have been able to say goodbye to their family and friends. They will experience trauma and possibly flashbacks to the bombings and fear.

Now take into account that mental health services in England alone received a record 4.3 million referrals last year as the pandemic drew to a close, and it’s fair to wonder how on earth the government believes that everything these newcomers should expect can be provided.

Then there are the schools. Too many children are already crammed into classrooms with too many students in buildings needing urgent attention. This is another area where the dire specter of the coronavirus pandemic looms.

Millions of children are out of school and a large percentage of them are struggling to catch up.

Now add the challenge of providing education to thousands of children whose first language is not English, and the picture becomes even bleaker.

Finally, there is the eternal problem of housing. For many years, the number of houses built fell miserably below government forecasts. If we take into account this shortfall over several years, the pressure of the lengthening of the queues for social housing is quickly understandable. Once again, the arrival of thousands of homeless people from Ukraine will not alleviate this situation.

These are just three key areas, and while noting that there are more, the government’s response is jaded at best and bordering on indifference at worst.

The government needs to realize that it’s not like wishing Tinkerbell got better at Peter Pan. These are real people caught up in the worst crisis this continent has seen in many lifetimes.

Words will provide neither doctors nor homes. The great British people have rightly and magnificently taken up the challenge.

It remains to be seen to what extent the government can match them.

The photo, from 1972, shows a 9-year-old girl caught in a napalm bombing in Vietnam (Image: Getty)

WARS has a well-documented history of providing graphic and disturbing imagery. In a frame, they can point out the old adage that “a picture is worth a thousand words.”

Hopefully there is nothing more heartbreaking to come out of the war in Ukraine than this photo above of a heavily pregnant woman bleeding profusely as she is carried from the smoldering ruins of the Mariupol maternity hospital after being targeted by Vladimir Putin’s missiles.

Those with long memories will remember the photo of the so-called “Napalm Girl”. Dating to 1972, it shows a nine-year-old girl caught in a napalm bombing in Vietnam with her burning clothes falling from her body. Luckily that girl lived and Phan Thi Kim Phuc is now a 58-year-old woman with two children living in Canada.

Tragically, the same cannot be said for women in Ukraine. Last week, it was revealed that the baby she was carrying had passed away, as had the mother. Let’s all fervently hope that no other image comes close to capturing the unfolding horror of the Ukrainian war than the one above.

What’s going on where you live? Find out by adding your postal code or visit InYourArea

THE desperate need for someone to rein in the nation’s largest police force was on full display last week for what seems like the umpteenth time.

In the wake of scandals involving on-duty officers taking pictures of dead bodies and exchanging them with other cops, and police at a London station exchanging a series of racist and homophobic messages, we learn that two female police officers submitted a young 15-year-old girl to a humiliating strip search at a school in Hackney, east London.

Teachers said there was a strong smell of cannabis around the girl, but despite searching her bag and clothes, they found nothing. although she was menstruating at the time.

No drugs were found. The girl was black and an examination found that racism “was likely to have been an influencing factor”.

As the Met goes from crisis to crisis, what is undeniable is that the good people of London deserve better.

AS posing popinjay, the French president chose to wear military gear similar to that sported by Ukrainian President Volodymr Zelensky. The problem is, when Zelensky wears it, he looks like a war hero, but Macron looks like an Action Man doll… but less menacing.

THE BBC will reduce original programming on its children’s channel and show more cartoons. This, he says, will appeal to a more working-class audience. It’s hard to remember a decision as offensive as this.

Meghan Markle’s father is ready to testify against her in court.

At least he could finally meet his grandson.

IF YOU’RE looking for proof that patience is a virtue, this crisp red will suffice. The 2017 Beronia Reserva spends up to 36 months in barrels – or “rest” – and the taste is proof of that. Worth every penny of £14.99 at Sainsbury’s.